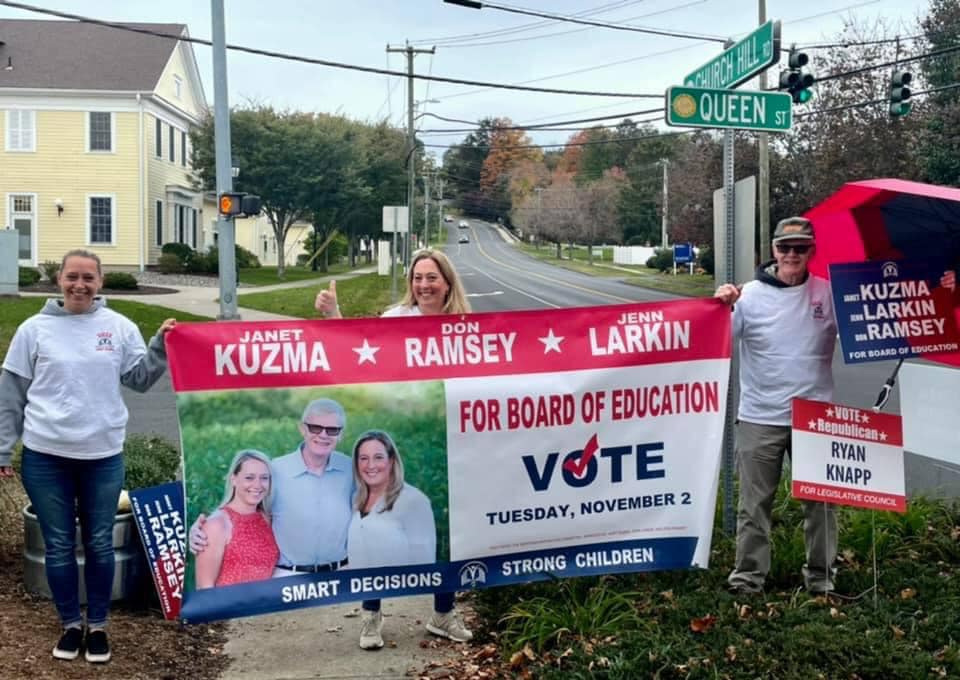 The Newtown Republican Town Committee has pulled three Republican board of education candidates from participating in a scheduled candidate event with their fellow Democrat candidates due to public hostility both online and in town.

“Here in town, property has been destroyed, eggs thrown, and candidates verbally harassed in public. Some residents have engaged in bullying and intimidation of local businesses over political views,” the RTC wrote in a letter to the Newtown PTA/PTCA informing them of their decision to withdraw.

“Postings on Newtown social media pages allegedly express intent to target candidates at the forum. These reports come from multiple people in our community and from a variety of political affiliations. In view of the belligerence exhibited nationwide in public forums such as school board meetings, our board takes these social media postings very seriously,” the letter continued.

The letter was posted on a private Facebook group page.

Local school board elections have become a hotbed of political activity and hostility both in parts of Connecticut and across the country as parents and school board members exchange accusations and debate what is being taught in the classrooms regarding racism and critical race theory and masks in schools.

In many instances, it has been Democrat school board members bearing the brunt of parents’ concerns and, at times, anger.

Last week, the Connecticut Senate Democrats posted a cartoon on Twitter that depicted parents as Hollywood movie monsters saying they were attending a board of education meeting. The tweet garnered the attention and anger of many national figures on Twitter and was reported on by Fox News.

However, in this case, it’s Republicans candidates for a local school board election who are bearing the brunt of an increasingly politically polarized country.

Reached for comment, Newtown RTC Chairman Dennis Brestovansky says that the RTC’s decision was not made lightly and does not reflect on the PTA/PTSA or any of the event organizers.

“They’ve done a tremendous service to the voters by trying to pull this together,” Brestovansky said. “But we had to make a decision about what’s best for our candidates given what they see happening to them personally and as part of their candidacy in social media and public events.”

“There’s been a lot of commentary made that’s just plain personal attack,” Brestovansky said, including comments made regarding candidates’ family members. Brestovansky added that he has not personally witnessed these incidents but is responding to reports he is receiving from the candidates.

Brestovansky said in light of the hostility, they felt it would be better to avoid further incidents by attending the candidate event. “It’s nigh on impossible for the board of education members who are currently sitting, or the organizers of events such as this forum for candidates running for board of education, to really control this and ensure that decorum is maintained.”

“It’s not anything against the organizers, it’s just virtually impossible to do that,” Brestovansky added.

Jennifer Padilla, a Democrat running for the Newtown Board of Education, wrote in a Facebook post that she has been “fielding questions and messages” on the topic and that while “childish behavior” should not be condoned, it should also not be an excuse to not engage with constituents.

“I do not condone bullying or violence of any kind but what all of us as candidates have experienced is not these things. It is the nature of politics. Our constituents should be allowed to voice their concerns,” Padilla wrote.

“We believe all should feel safe and free to express their opinions to the public, including, if not especially, those who have volunteered their time in pursuit of serving that public,” the RTC letter concluded. “While this event has been very helpful to voters in the past as they seek to gather information to cast an informed ballot, we simply are not confident that the prior standards can be upheld this cycle.”