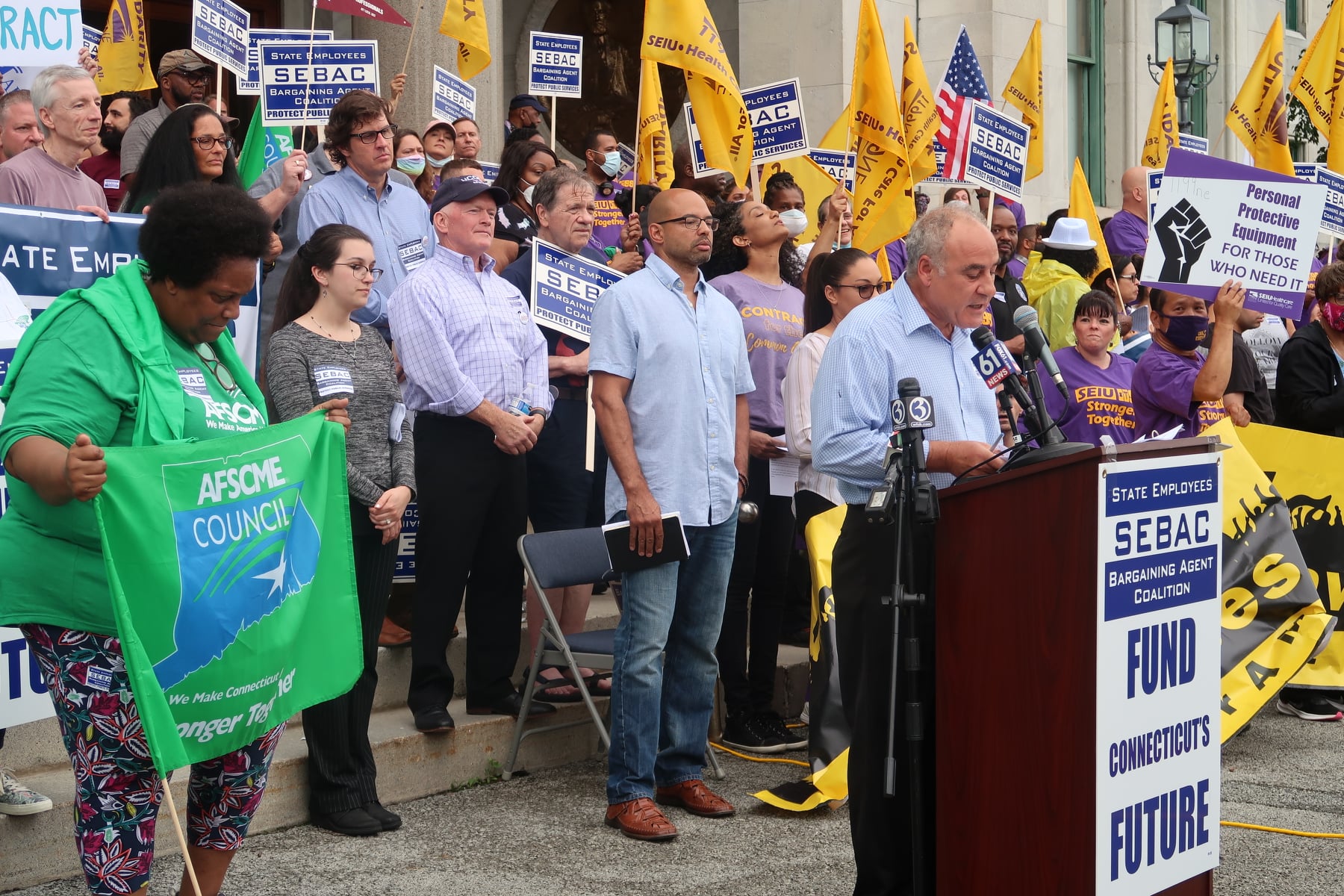 As Gov. Ned Lamont’s administration continues to negotiate with state employee unions over new collective bargaining agreements, the State Employees Bargaining Agent Coalition indicated that it would be willing reopen its pension and healthcare benefits contract only if the administration is willing to “explore positive issues.”

In the latest sign that union leaders may be growing frustrated with ongoing negotiations, SEBAC issued a statement saying they are “concerned with the overall lack of progress at the negotiating table for a number of months.”

However, the umbrella organization for those unions also indicated they would be willing to open the SEBAC Agreement, which governs state employee retirement benefits, for the right reasons.

“The idea is that through common interaction with the Lamont Administration we can agree on a pattern with respect to general wage increases, steps and related issues, and other cross unit issues that the State as an employer must offer at every bargaining table,” SEBAC wrote. “The parties can simultaneously explore positive issues in the pension and healthcare agreement, but the unions will not consider any changes that reduce benefits or otherwise negatively impact members.”

The SEBAC Agreement was originally negotiated between Gov. John Rowland and SEBAC in 1997 and was supposed to be a 20-year deal.

Despite the changes to the overarching retirement contract, the benefits remain among the best in the country, according to a letter sent by Ron McLellan, president of the Connecticut Employees Independent Union, SEIU 511 in 2017, encouraging union members to ratify the 2017 SEBAC agreement.

Negotiations between the unions and the Lamont administration take place behind closed doors, with legislators able to vote on the contracts after they have been agreed to by both parties. The administration is currently negotiating contracts that govern wages and workplace conditions for state employees, and SEBAC indicated they would be willing to take those negotiations to arbitration if necessary.

“Local negotiating committees are aware and supportive of this initiative and will be continuously updated about progress in the discussions,” SEBAC wrote. “They will continue to play their democratic roles with respect to all aspects of seeking agreements which they would be proud to recommend for ratification including, if necessary, pursuing arbitration.”

“If the initiative fails to produce such agreements, or negatively interferes with local negotiations, the Coalition will end discussions immediately and reserve all their rights with respect to the negotiation and, if necessary, arbitration of new agreements,” SEBAC said.

Arbitrated contracts still require legislative approval, but even in the unlikely event that the General Assembly rejected the arbitrated agreement twice by a two-thirds majority, Connecticut law says the final arbitration decision will be “deemed approved” by the General Assembly.

The arbitration law was passed as part of the 2017 budget agreement, which included a provision meant to curb the practice of lawmakers allowing contracts to be “deemed approved” after going 30 days without a vote. Between 2002 and 2017, 124 union contracts were passed without a vote in either chamber.

Following passage of the law in 2017, contracts which did not receive a vote within 30 days were deemed rejected, but it also allowed an arbitrator final say if the contract came to an impasse.

The Lamont administration and state employee unions have been butting heads throughout the past year over issues related to state employee raises, teleworking from home, Lamont’s efficiency study and contract negotiations.

Unions have held rallies outside the Capitol calling for better contracts, and earlier in the year SEBAC filed a lawsuit over the administration’s teleworking agreement. The lawsuit was subsequently dropped after the two parties reached an agreement.