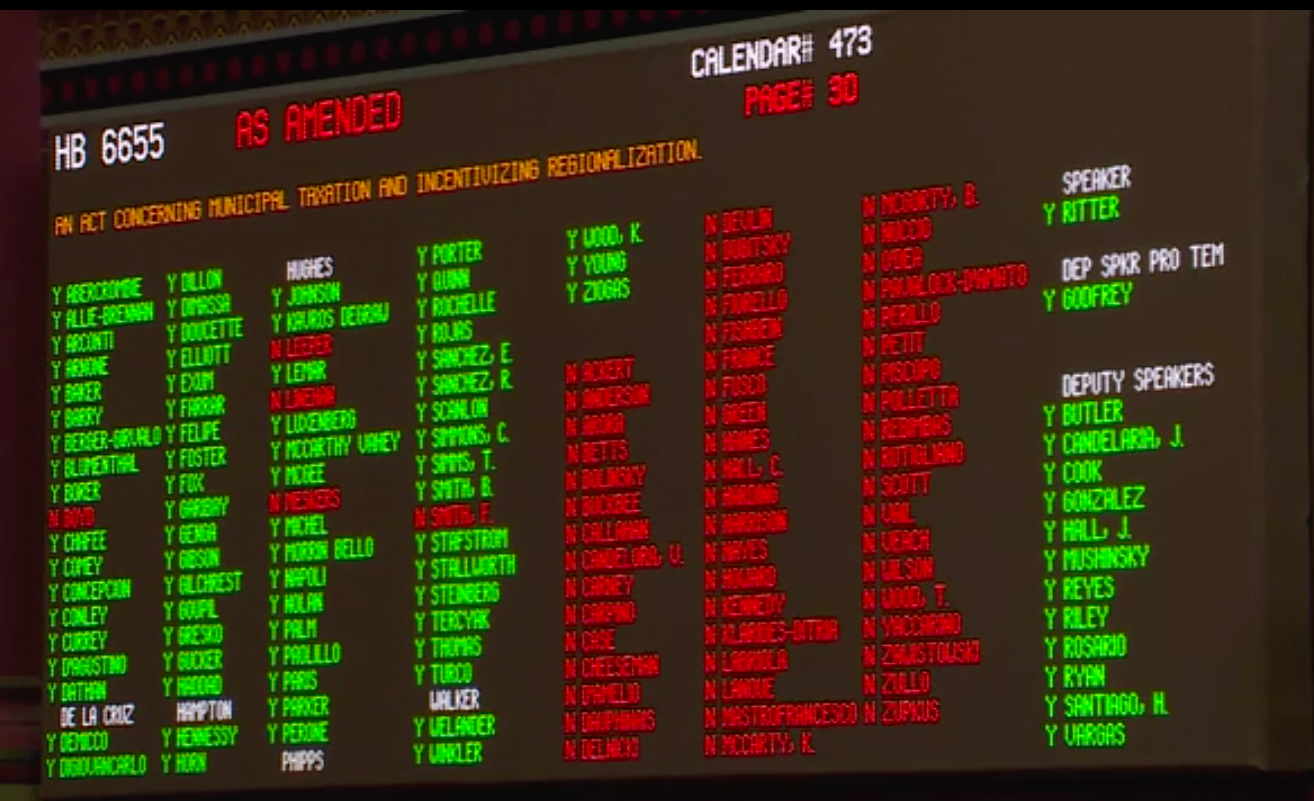 The Connecticut House of Representatives passed a bill on May 26 that would eliminate municipal charter language that prevents towns and cities from regionalizing services and allow unions to bargain on a coalition basis in a move Rep. Sean Scanlon, D-Guilford, labeled a “down payment on an idea that we should be giving towns the option” to regionalize.

Scanlon, co-chair of the Finance, Revenue and Bonding Committee, said that although his original bill was perhaps too large and ambitious for this session, the amendment put in place of House Bill 6655 focuses on the most agreed-upon aspects of the original legislation, namely making regionalizing services easier in order for towns to save money in the face of “shrinking state support.”

According to the amendment, “Any provision of a municipal charter, special act or home rule ordinance that prohibits or limits a municipality from sharing services with other municipalities is hereby repealed, revoked and rescinded.”

The amendment would also allow municipal labor unions to form coalitions between different municipalities to collectively bargain on a regional basis, similar to the State Employee Bargaining Agent Coalition.

Scanlon said the amended bill does not force regionalizing services between municipalities but rather allows them to do so if they choose and added that the measure was supported by the Connecticut Conference of Municipalities.

“It is absolutely meant to be an option and a tool to our municipalities, not a mandate,” Scanlon said during debate on the floor.

Republicans who voted against the amendment questioned why the bill was necessary when towns can vote to amend their charters and that much legislation this session has focused on bill granting more state control over local government decisions, particularly bills related to local zoning and housing laws.

Rep. Holly Cheeseman, R-East Lyme, ranking member on the Finance Committee, said that although she might have supported the bill in another form, “we are telling towns what to do or not to do from Hartford.”

“I think this is an important conversation to have but I think the people we represent want decisions as to what goes on in their towns to be made in their towns,” Cheeseman said.

The original bill was a property tax cap based on the property tax cap passed by Massachusetts and allowed municipalities to levy their own taxes and incentivized regionalization of services through awarding state grants. The strike all amendment eliminating municipal charter language replaced that original bill.

How the amended bill would play out if passed into law remained in question.

Scanlon said the bill only affect a “handful” of towns that have language in their charter specifically prohibiting shared services, while Cheeseman believed the bill invalidates charter language requiring a municipality provide a particular service.

According to Scanlon during floor debate, the labor coalition language in the bill would not allow labor unions to initiate regionalization services or coalition bargaining, they would be allowed to do so only after the towns chose to share services.

“To be honest with you, I’m sitting here listening to this debate, I’m not only frustrated but I’m getting to the point where I’m beginning to get a little bit angry,” said Rep. Charles Ferraro, R-West Haven. “We are giving the state permission to negate portions of a town committee’s charter.”

Ferraro argued that towns can “put out a charter revision and bring it to the people of the community and let the people decide.”

Rep. Rosa Rebimbas, R-Naugatuck, said towns may have such language in their charters to specifically stop the state from forcing them to regionalize.

Scanlon said that municipal charter reform – like regionalization – has often been a “third rail” in Connecticut politics.