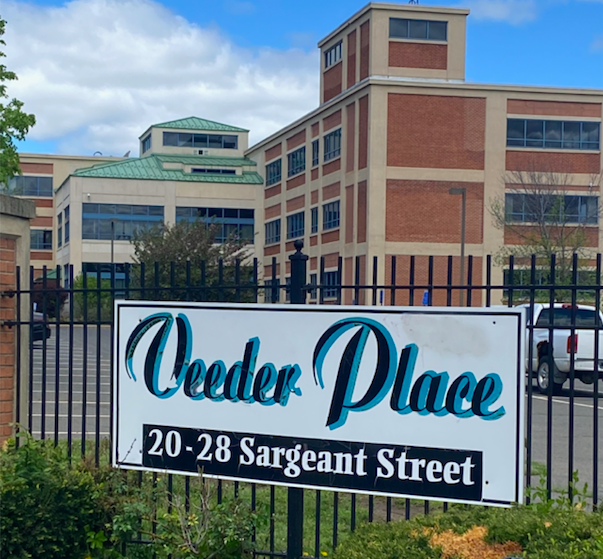 The story of Veeder Place — which begins in 1996 — almost sounds like the beginning of a joke: A priest, a doomed cellphone start-up company and Gov. John Rowland walk into a bar with a plan to create 250 jobs in Hartford…

But the not-funny punchline cost taxpayers at least $20.2 million and those 250 cell phone jobs never materialized.

The state of Connecticut borrowed $18 million in the late 90s to rehab the Veeder-Root factory at 20 Sargeant St. in Hartford turning it into Veeder Place. The project was spear-headed by the MJB Corporation, a nonprofit corporation created by Rev. Thomas Barry, a priest who had grown up across the street from the Veeder-Root factory.

Barry saw an opportunity “rehab that property and reclaim the neighborhood where I grew up,” Barry said in an interview.

With state investment, he hoped to revitalize the area with good paying jobs brought by Starrtel Cellular Group, a new cellphone start-up company out of New Haven run by a couple who had previously declared bankruptcy, according to the Hartford Courant.

Connecticut’s Department Economic and Community Development awarded Starrtel a $2.2 million loan for their start-up venture, along with a city grant of $200,000 and federal loans.

Starrtel was expected to add 250 jobs for Connecticut’s beleaguered capital city, but the company quickly went belly-up and, according to news reports at the time, many residents were left angry over the loss.

However, property taxes to the City of Hartford went unpaid by MJB between 2010 and 2020, racking up a $2.1 million tax liability.

Barry says that even as a nonprofit corporation, they paid Hartford $1.8 million in property taxes and gifted the property they owned at the corner of Walnut Street and Homestead Avenue to the city so it could realign the intersection.

But property tax bills started piling up, however, after some of the tenants began to move out, including the local ironworkers’ union.

“The people on site who no longer were working with us and when they left the property, especially the ironworkers, the income flow went down significantly, and the taxes continued to accrue,” Barry said. “The city said they weren’t going to give us any kind of tax adjustment.”

Attempts by MJB Corporation to sell the property to a private buyer fell through due to either funding issues, or the hefty tax liability hanging over the property.

Now, Hartford Mayor Luke Bronin is asking the City Council to approve a tax lien sale of $906,993.04 for Veeder Place in a deal with Hitesh (Max) Kothari, CEO of Express Kitchens and chairman of the Hartford Chamber of Commerce.

As part of the deal, Kothari will pay off a portion of the tax lien over several years and acquire ownership of the building from MJB, which Express Kitchens will continue use as a warehouse facility. The two community non-profits will be guaranteed to stay and have their rent frozen for one year. The tax lien cannot be sold for profit for five years without a $1.2 million penalty under the terms of the agreement.

Typically, municipalities will hold an auction for a property tax deed sale, or they could foreclose the property and then sell it. But in this case, the city has already secured a buyer with whom they are well-associated.

With the tax lien sale the city may see an easy way out while still getting some tax revenue out of the deal. Under a tax lien sale, the buyer takes on the responsibility of recouping the tax loss and has to jump through all the legal hoops.

“We’ve made an arrangement with them to acquire the property,” Barry said.

But some residents see a lost opportunity for city to sell the building for more by putting it on the market or up for auction.

“The city council should demand a better deal, find another buyer, or insist on putting this taxpayer-funded property on the open market,” Peterson wrote. “Bottom line, this is a rip-off of an asset of the City of Hartford.”

Hartford’s Department of Development Services says the tax lien sale is the best deal for the city because the land requires “significant environmental remediation,” which Kothari has committed to, as well as his commitment to keeping the current tenets.

“It is important to the city that the property remain in the hands of someone who does not intend to land bank the property, and as the buyer is a business owner with a track record of growing jobs in Hartford (and in North End specifically), we judge this to be in the public interest,” the department wrote in an email.

The city’s 2020 assessment valued the building and property at $2.1 million and it is located in a federally recognized Opportunity Zone, meaning an investor can potentially get capital gains tax breaks by either restoring the building or conducting 70 percent of their business at the location.

“Wouldn’t some other investor or business love to purchase this property for a much higher price and receive the asset plus resulting tax benefit?” Peterson wrote. “Isn’t the City better off putting this cleaned-up, renovated property out on the open market to see if we can get a bidding war that is far greater than $1 million?”

Barry says that he feels MJB “accomplished our mission,” noting that MJB put resources toward not only rehabilitating the Veeder-Root factory but the street itself and the some of the houses in the neighborhood.

The building does house community nonprofits with employees, which means there are jobs, just not in cell phone manufacturing as originally envisioned.

“We basically want to sell the property and we’ve had many people look at it over the years but this appears to be an actuality,” Barry said.