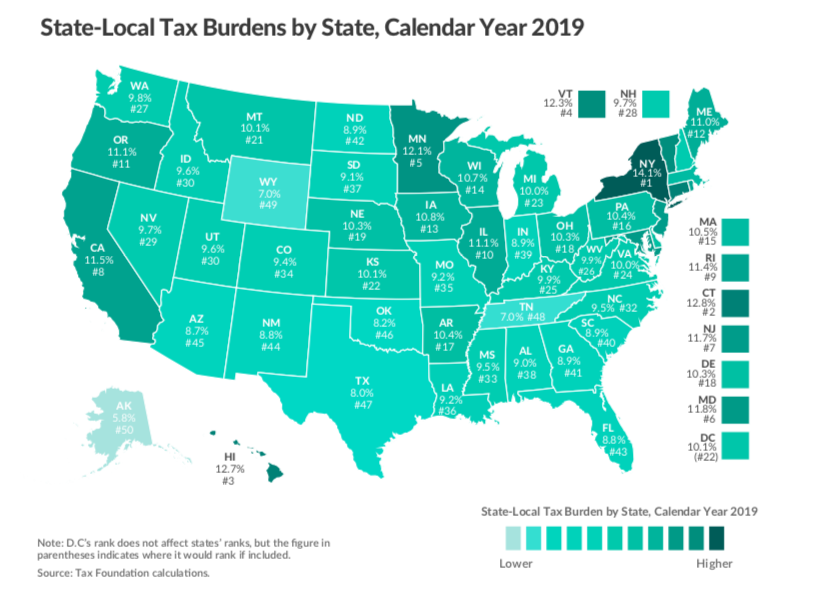 Connecticut has the second largest tax burden in the United States, according to a new report by the Washington D.C.-based Tax Foundation, which measured the economic impact of taxes on residents in each state as a percentage of their income.

New York had the highest tax burden in the country at 14.1 percent, while the national average was listed as 10.9 percent and, the authors note, slight changes can lead to dramatic shifts in the measurement of a state’s tax burden.

Connecticut’s position as having the second highest tax burden in the country has not changed since 2017 when the Tax Foundation began compiling the annual report.

“New York, Hawaii, and Connecticut have occupied the top three spots on the list since 2017,” the report notes. “This may be partially attributed to high expenditure levels, which must be sustained by high levels of revenue.”

According to the Tax Foundation’s report, overall the average tax burden across all 50 states has decreased since from 11.7 percent in 1977 to 10.3 percent in 2019. Meanwhile, Connecticut’s tax burden has increased from 12.1 percent to 12.8 percent during that same time period.

The report, however, comes as the Connecticut legislature debates whether to raise taxes on Connecticut’s high-income earners, with an assortment of bills ranging from a statewide property tax on higher-value homes to increasing the state income tax rate for the top bracket and levying a surcharge on capital gains.

During a marathon public hearing before the Finance, Revenue and Bonding Committee that lasted all day and through the night, supporters of these tax proposals argued that Connecticut’s tax structure results in lower-income families paying a higher effective tax rate than the wealthy.

“Connecticut’s regressive tax system decreases the amount of income that the typical household, especially those of color, can turn into wealth each year, which in turn contributes to rising wealth inequality and the racial wealth gap,” Shah wrote in her testimony. “Further, by decreasing the amount of income and wealth available for the typical household to spend and boost economic demand, Connecticut’s regressive tax system contributes to slowing economic growth.”

Support for the increased taxes has been spearheaded by the Recovery for All coalition, made up of largely of labor unions and left-wing advocacy groups like the Connecticut Working Families Party.

Opponents argue that raising taxes on Connecticut’s wealthy individuals will hasten the loss of high-income earners to low tax states like Florida. Connecticut has raised the top income tax bracket rate four times since the inception of the income tax in 1992.

Connecticut’s tax department conducted its own tax incidence report in 2014 based on 2011 tax figures, which found families earning over $287,630 accounted for 25.5 percent of the state’s tax burden, while those earning less than $47,948 accounted for 20.4 percent, but the effect of taxes on particular income groups varied.

Property and sales taxes, for instance, fell harder on low income earners, while the state income tax was heavier for middle and high-income families.

The Department of Revenue Services is supposed to produce a tax incidence report every two years, funding for the study has been continually stripped from the budget. The 2014 Tax Incidence Report, therefore, does not account for tax increases or their effects since 2011.

Despite major tax increases in 2009, 2011 and 2015, Connecticut’s budget problems have persisted with regular deficits and, since the 2008 recession, the state has struggled economically, with some of the lowest economic, job and personal income growth in the country.

Although the latest call for tax increases are backed by the powerful progressive caucus of his own party, Gov. Ned Lamont has thus far said he does not support restructuring or increasing Connecticut’s taxes.

Connecticut also has over $3 billion in its budget reserve fund that Lamont is leaving largely untouched, barring any unforeseen cost increases or revenue decreases.

States like Alaska, Wyoming, Tennessee, Texas and Florida all ranked in the bottom ten states for tax burden, many of which do not levy a personal income tax or “do without a major business tax,” according to the Tax Foundation study

By Marc E. Fitch July 8, 2021 Taxes One Comment
Connecticut’s economic troubles since the 2008 recession are well known. The state has experienced some of the lowest job growth
Read More