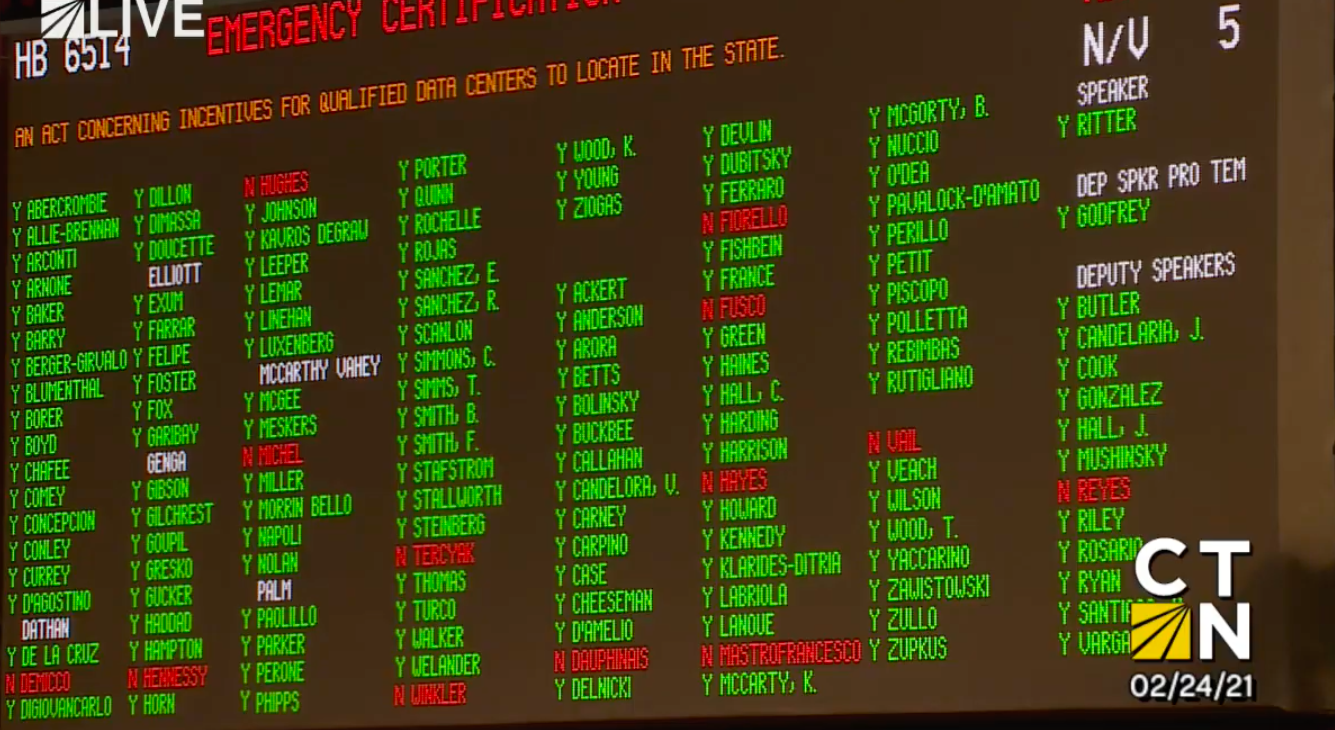 A bill granting up to 30 years of property and sales tax exemptions for data centers in Connecticut passed in the House of Representatives 133-13 under an emergency certification.

Although the legislation has been in the works for years, the sudden rush to pass the bill may have to do with New Jersey’s idea to raise nearly $10 billion in revenue by taxing financial transactions.

New Jersey hosts data centers for major stock exchanges and financial companies, but the data centers also act as a point-of-sale for stock trades and would be subject to the New Jersey tax.

“They have enacted a financial transactions tax in the state of New Jersey and, that is correct, that is part of why that language is in this bill, to make us more competitive compared to our neighboring states,” Scanlon said.

The bill introduced to the New Jersey legislature immediately sent stock exchanges moving their data transactions to their other data centers in Chicago, but, according to reports, they may not be safe from a financial transaction tax in Illinois either.

According to Data Center Knowledge, Illinois has also considered a financial transactions tax in the past.

Testifying before the Finance, Revenue and Bonding Committee Tuesday, General Counsel for the New Jersey-based Members Exchange Anders Franzon said Gov. Ned Lamont’s proposals met all their criteria for bringing their data centers to Connecticut and that his industry needs assurance they can have a home for decades without facing a transaction tax.

Not only does the bill award no property or sales taxes for construction and operating of the data centers, but the legislation also exempts the data centers from a financial services tax if one were passed in the future.

Scanlon said the sales tax exemption is necessary because data centers are very expensive to build and maintain and often require new equipment to be purchased every few years to keep up with technological advancements.

“This is a job of the future,” Scanlon said. “There’s not many jobs in the actual facility but the ancillary jobs connected to it and what a facility like this could mean for some of our cities and towns in Connecticut is extraordinary.”

The bill received bi-partisan support with Democrats remarking on the opportunity to bring a new industry into the state and Republicans remarking that it could help stimulate Connecticut’s troubled economy.

“Connecticut has seen economic growth of .6 percent over the last several years,” said. Rep. Holly Cheeseman, R-East Lyme, who supported the bill. “This is an industry that will put Connecticut on the map in terms of jobs, in terms of importance.”

“Obviously, if we were to become the hub of data centers in the United States I think it would be yet another thing that Connecticut would be very proud to have here as talk about what the 21st century Connecticut economy is going to look like.”

Gov. Lamont applauded passage of the bill in the House of Representatives.

“Data centers are the backbone of the digital age, and with this growing need we are witnessing a significant period of national growth to build these infrastructures and create the corresponding jobs that support their operations,” Lamont said. “Connecticut needs to get in the game and bring this industry to our state. This is a once-in-a-generation opportunity to show the technology industry that Connecticut supports this sector and we welcome their development in our state.”