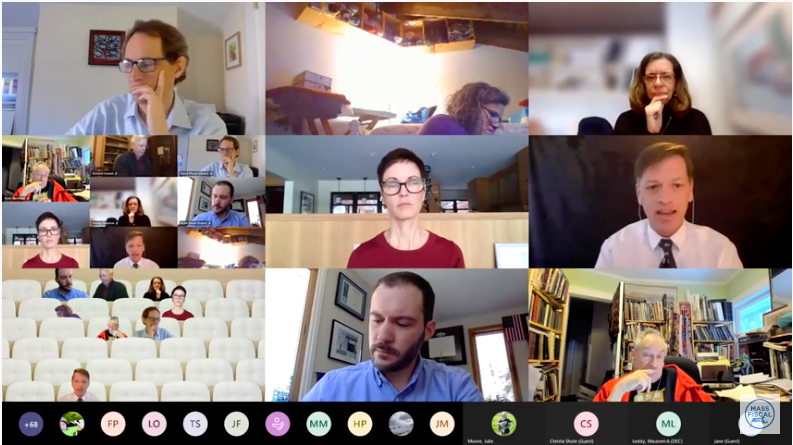 Massachusetts Under Secretary for Climate Change David Ismay resigned his position after he was caught on video telling climate advocates in Vermont that state government must “turn the screws” on ordinary people in order to lower home heating and vehicle emissions.

“So, let me say that again, 60 percent of our emissions that need to be reduced come from you, the person across the street, the senior on fixed income,” David Ismay said. “There is no bad guy left, at least in Massachusetts to point the finger at, to turn the screws on, and you know, to break their will, so they stop emitting. That’s you. We have to break your will. Right, I can’t even say that publicly.”

The video was published by the Massachusetts Fiscal Alliance, a Massachusetts 501(c)4 organization that “advocates for fiscal responsibility, transparency and accountability.”

“Ismay’s comments are simply reprehensible,” MassFiscal wrote in a February 5 blog post. “He describes his target as ordinary people in Massachusetts like the elderly on fixed incomes and the person across the street.”

“The weapon he intends to use to ‘turn the screws’ on them is the new climate legislation and administrative tax increases like the Transportation and Climate Initiative, which seek to drive up costs in order to ‘break their will’ and force decreases in consumption.” MassFiscal wrote.

Release of the video led to reaction from Massachusetts Gov. Charlie Baker who said, “First of all, no one who works in our administration should ever say or think anything like that – ever,” Baker told the Boston Herald. “Secondly, Secretary Theoharides is going to have a conversation with him about that.”

“I would like to apologize, again, for my comments at last month’s Vermont Climate Council meeting,” Ismay wrote.

“Although my comments were interpreted by some as placing the burden of climate change on hardworking families and vulnerable populations, my intent was the opposite,” Ismay said in his letter. “In the entirety of my remarks, and as I have elsewhere, I was urging caution in order to minimize such impacts out of a sincere concern that overly aggressive emissions targets may have unintended and harmful consequences on those we most need to protect. “

The Massachusetts legislature recently passed a law that would purportedly lead to zero net emissions in Massachusetts by 2050 through emissions target reductions, appliance efficiency standards and additional offshore wind power, according to the Herald. The legislation is currently awaiting Baker’s signature.

Connecticut joined Massachusetts, Rhode Island and Washington D.C. in signing onto the Transportation Climate Initiative, a cap and invest program that would require gasoline producers and distributors to purchase carbon credits under an emissions cap.

The money generated through auction would be funneled to participating states to fund public transportation, electric vehicles and climate justice.

Gov. Ned Lamont signed on to the Transportation and Climate Initiative’s Memorandum of Understanding in December of 2020 and included funds from TCI in his budget proposal released earlier this week.

Lamont expects TCI will bring between $80 and $100 million per year to Connecticut. However, the measure would also raise gasoline prices between 5 and 17 cents per gallon, depending on the emissions cap. A majority of those funds will go to support public transit.

Emissions declined 30 percent across the Northeast during 2020 due to the pandemic and fewer people commuting to work, according to NASA. Traffic in Connecticut remains light as significant numbers of people continue to work from home.

According to TCI’s own estimates, emissions across the Northeast would decline 19 percent by 2032 without imposition of the regional cap and invest program. Under the most stringent cap, which would raise gasoline prices by 17 cents per gallon, the emissions reduction would climb to 24 percent.

MassFiscal said they were “pleased” to hear that Ismay stepped down from his position.

“Unelected officials with that much power should never hold these types of views,” said Paul Diego Craney, a spokesman for MassFiscal. “For the past year, we’ve continually warned the public regarding the dangerous amount of power being handed over to unelected bureaucrats through various climate initiatives such as the Transportation & Climate Initiative (TCI) and the pending climate bill.”