Restaurant workers protest outside Governor’s Residence: “Nobody is seeing us.” 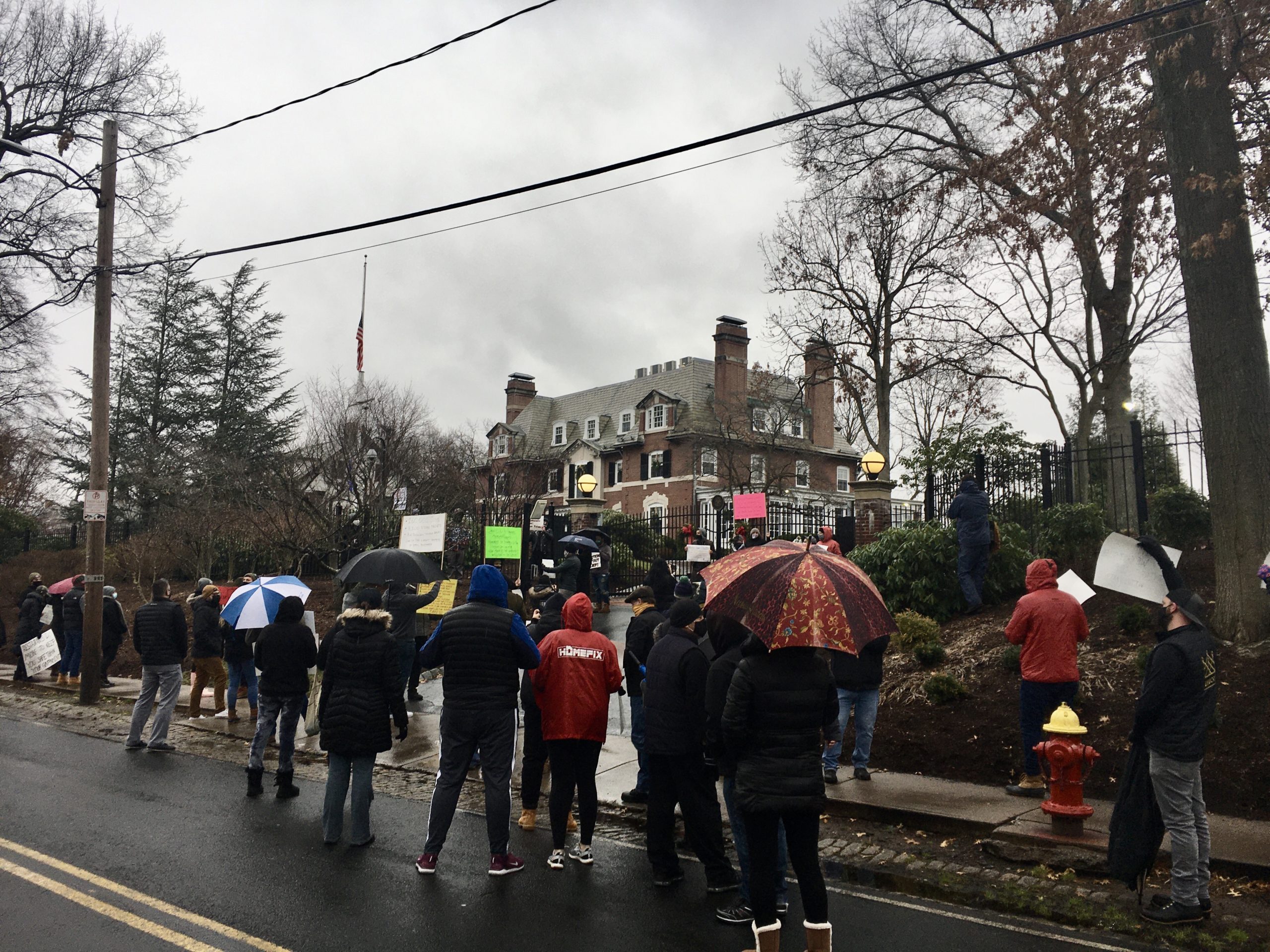 On the day Connecticut received its first shipment of the COVID-19 vaccine, approximately sixty restaurant owners and employees marched in a cold rain outside the Governor’s Residence in Hartford to protest against the possibility of shutting down restaurants again and a lack of support from the state government.

Chanting slogans like “No restrictions without relief,” and “Empty seats, empty pockets,” the group carried signs and loudspeakers and hoped Gov. Ned Lamont would stand against recent calls by medical professionals to close restaurants and gyms in response to spiking coronavirus cases.

Stevie Sacco, general manager of the Mercato restaurant in Southbury, says that restaurants are being used as “scapegoats” for the rising COVID-19 cases after several months of Connecticut having one of the lowest infection rates in the country.

“We have been doing everything times five of what any other industry has done to keep people safe and we get no credit for it and, in fact, we’re still taking the fall,” Sacco said. “Any other industry would have relief by now but for some reason we’re the scapegoats.”

Sacco says the idea that communities will come together to support small businesses just isn’t adding up. “They’re absolutely terrified to go out and they’re not,” Sacco said. “Our communities can only do so much, at this point it needs to be our government.”

The federal government’s CARES Act provided low interest emergency loans for businesses, but the funds were quickly used up and thus far Congress has been stalled on another relief package.

The restaurant industry, and the hospitality sector in general, were the hardest hit by the government-mandated shut downs and accounted for a majority of the unemployment claims by workers who were laid off.

James Brewer, a manager at Hub Pizza Bar in Naugatuck – which opened during the pandemic – went from creating jobs in the Naugatuck area to having to lay people off and that even take-out orders are declining.

“We came out of the gate swinging but then with everything that’s going with all the restrictions, it’s really frightening people and getting them to stay home. People aren’t even doing take-out anymore,” Brewer said. “That restaurant alone created at least thirty more jobs for Naugatuck residents and, at this point, we had to tell everybody we can’t be doing it anymore.”

“We’re hanging in there as much as we can. We’re COVID compliant across the board, there’s plexiglass everywhere, there’s hand sanitizer everywhere, we take everyone’s temperature but at this point it’s like chasing our own tails,” Brewer said.

Erin Sawyer, a bartender, says the restrictions are meant to keep people safe but they are also creating fear among Connecticut residents which has led to them not patronizing restaurants at all.

We can’t stay home and get paid like some other industries, and then we’re going to work every day and we’re not getting paid. At some point, somebody needs to see us and nobody is seeing us.

The protest was planned following a press conference by Gov. Lamont that featured Dr. Manisha Juthani, an infectious disease researcher for the Yale School of Medicine, who said the governor should once again close restaurants and gyms in response to spiking corona virus cases.

New York City just announced that restaurants and other non-essential businesses will be forced to close again during a holiday season that is normally the busiest time of year for the restaurant industry and allows them to coast through slower months in January and February.

Thus far, Gov. Lamont has said he will not impose any further restrictions on indoor dining or gyms but appears caught between a rock and several hard places: pressure from the medical community, pleadings from the restaurant industry and rising coronavirus cases.

However, with a vaccine on the way there may be hope for some restaurants to weather the continuing storm a little longer – but that wait comes at a damaging price for many restaurant owners and workers.

“We can’t stay home and get paid like some other industries, and then we’re going to work every day and we’re not getting paid,” Sacco said. “At some point, somebody needs to see us and nobody is seeing us.”