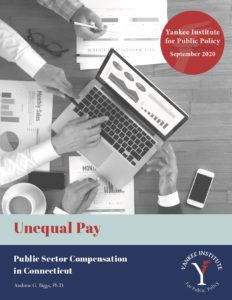 Public employee pay and benefits in Connecticut are a matter of concern and debate for policymakers, employees and citizens. Elected officials must craft budgets amidst the Covid-19 crisis even as public sector salaries and benefits increase in costs. Public employees often are convinced they are underpaid relative to private jobs, even as private sector workers envy the benefits and job security offered in government employment. Often discussions are carried out via anecdotes or selective use of facts and figures rather than a comprehensive view drawing upon the best analytical methods and data available.

This analysis updates a 2015 study of pay and benefits for state government employees in Connecticut, to which we refer readers for a more comprehensive discussion of various issues involved with measuring public sector compensation. This update includes several improvements over the 2015 study. First, it relies on new and superior data produced by the federal government on fringe benefits paid to public and private sector workers in Connecticut. These new data provide a more accurate view of the various benefits provided in and outside of government. Second, these new fringe benefit data allow the study to include both state and local government employees, whereas the 2015 study limited itself to state government employees. Third, this update analyzes employee salaries at different parts of the wage distribution, whereas the 2015 study looked only at the average employee. Finally, the study relies on more recent data, spanning the years 2014 to 2018, the most current data available.

The analysis of Census Bureau data for a typical employee, Connecticut state or local government employment pays a salary that is roughly comparable to what a similar employee would earn in a private sector job. However, data from the National Income and Product Accounts show that state and local jobs in Connecticut offer fringe benefits that are over twice as generous as private sector jobs. As a result of these more generous benefits, in particular pensions and retiree health benefits, a typical public sector employee receives total compensation that is approximately 28 percent higher than is paid to a comparable private sector worker.

Connecticut faced significant budgetary challenges even prior to the Covid-19 pandemic and economic downturn, in part due to high public pension and retiree health obligations. Policymakers will need to balance spending priorities even more finely as the state seeks to recover from the Covid recession. The results of this analysis demonstrate that state and local government employee compensation, in particular employee benefits, could be restrained considerably in cost and generosity before risking that public sector occupations would become financially uncompetitive with private sector jobs.