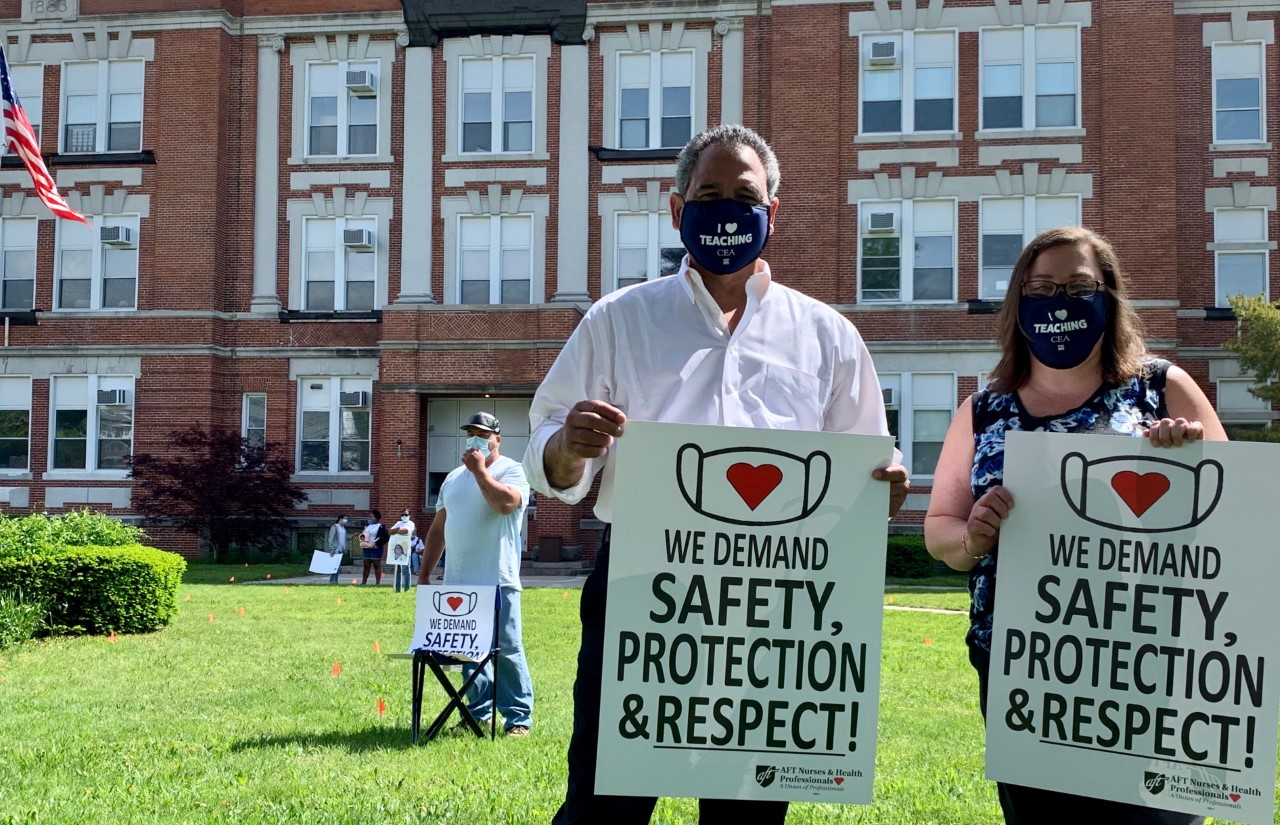 A coalition of unions representing teachers, paraprofessionals, janitors and bus drivers issued 13 “non-negotiable” standards for school reopening and have pushed for districts to delay in-person teaching for two weeks, but, according to the unions’ own assessment, they have little say in the matter.

Union leaders have publicly expressed their problems with the reopening plans set by school districts and, according to emails obtained under a Freedom of Information request, they were not pleased with the Connecticut State Department of Education’s school reopening plan, either.

The state’s plan entitled “Adapt, Advance, Achieve,” called for maintaining social distancing, requiring face coverings in schools and breaking students into groups that can be more easily managed, but much of the day-to-day operation of schools was left to the determination of each district.

Union leaders were quick to lambast the reopening plan, writing in a joint press release that “Clearly what Connecticut’s students, their families and educators need is a lifeline, not an anchor – unfortunately that is all this so-called ‘plan’ appears to be.”

Jan Hochadel, president of the American Federation of Teacher CT, forwarded the condemnation to Miguel Cardona, Commissioner of the Connecticut Department of Education.

“I don’t want you to be blindsided… my educators are very upset,” Hochadel wrote.

A number of school districts have divided the school population into two groups who will attend in-person classes part of the week and do remote learning from home on other days.

But union leaders are criticizing many district’s refusal to meet demands for additional accommodations for staff but did not publicly name any particular school district during a virtual conference held on August 24.

The Connecticut Education Association also released a set of recommendations and called for delaying the school year by two weeks, providing accommodations for at-risk teachers, students and staff and upgrading school ventilation systems.

By the unions’ own reckoning, they have little power or leverage to negotiate their recommendations and requirements with school districts, short of exerting public pressure.

However, by the unions’ own reckoning, they have little power or leverage to negotiate their recommendations and requirements with school districts, short of exerting public pressure.

According to the emails, the unions compiled their own legal questions and answers into a document which showed they have little leverage to force districts to meet their demands and then shared that document with the education commissioner.

The Q&A document shows that teachers cannot refuse to report for work and “most likely” could not refuse to work in a poorly-ventilated room if other safety precautions like masks are being taken.

While unions are also demanding that full PPE be provided to all staff and students who will be in contact with an unmasked student, the Q&A document says that, once again, they cannot refuse to work because of those concerns.

“Staff cannot refuse an assignment if they do not feel that they have proper PPE” the document reads and says staff and teachers should contact OSHA and use public pressure to get districts to comply. “Public pressure can also be used. Parents are not going to be happy about the use of substandard PPE.”

They also address the possibility of at-risk teachers asking for accommodations under the American Disabilities Act, but the answer says “Covid related illness is not a disability but if you have heightened health issues that can be reason to request an accommodation.”

Williams, executive director of the CEA, recently said that between 15 and 30 percent of teachers have compromised immune systems, although he was possibly referring to a survey conducted by the unions in which 27 percent of those surveyed said they had some health factor which put them at higher risk for COVID-19.

“Employers must still engage in the interactive process to find a reasonable accommodation; however, they need not accommodate every request if it would cause an undue hardship on the employer,” the document says. “An undue hardship means a significant difficulty or expense. Even with an accommodation, the employee must still be able to do the essential job functions of their position.”

The emails between Cardona and the state’s largest teacher unions also show a collaborative environment in which, even when union leaders are expressing outrage in the public sphere, they are working in-tandem with the administration.

Hochadel shared with Cardona a message she was forwarding to her members to get his thoughts beforehand, and Cardona, likewise, shared his opening remarks with Hochadel first to show “unity.”

Left with little recourse or leverage to coerce districts to meet their requirements, union officials have increasingly turned toward exerting public pressure on education officials.

Left with little recourse or leverage to coerce districts to meet their requirements, union officials have increasingly turned toward exerting public pressure on education officials.

Besides holding a virtual press conference outlining their recommendations or requirements for school reopening, local teacher unions and leaders have taken to the media to air their concerns and put public pressure on schools to rethink their reopening plans.

In July, the CEA and AFT organized a car caravan rally of more than two dozen cars demanding more funding for schools and pressuring the Lamont administration to adopt their “Safe Learning Plan.”

Connecticut’s 2019 teacher of the year Sheena Graham from Bridgeport appeared on CBS This Morning, teachers in Region 12 joined a virtual board of education meeting to pressure the board members, and teachers in East Haven held a rally and petition drive to urge the school to move away from fully reopening.

A survey of teachers conducted by the CEA showed the majority favored keeping schools closed and continuing with online distance learning and three-quarters of the teachers opposed Lamont’s reopening plan.