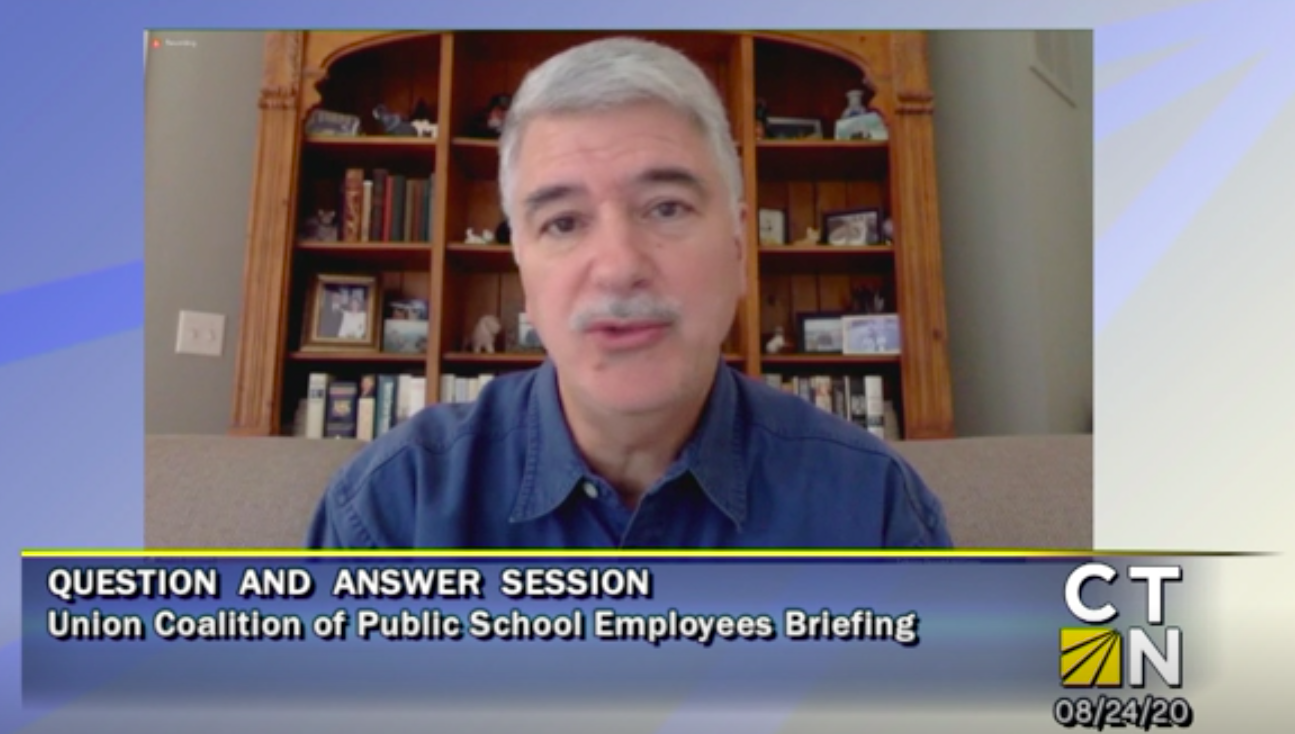 On Monday a coalition of unions representing employees in Connecticut’s public school system including teachers, paraprofessionals, janitors and administrators released a list of 13 “non-negotiable” requirements for reopening schools.

During a virtual presentation before union members and the media Don Williams said that accommodations for teachers and other staff who have compromised immune systems are not being made and that it could affect 15 to 30 percent of school staff.

Williams said that although the unions have been pushing for accommodations, such as allowing immunocompromised teachers to teach from home while children are in the classroom, the districts have not taken any steps to meet those needs.

“That is a critical need that is unaddressed that probably affects somewhere between 15 and 30 percent of teachers and we are going to continue to fight at the district level so that those teachers, paras and staff are safe.”

Adults with compromised immune systems have a weakened ability to fight off infectious diseases and are therefore much more susceptible to the COVID-19 virus and complications due to the virus.

The Centers for Disease Control found that 3.7 percent of people hospitalized with severe complications due to the coronavirus had compromised immune systems, although only 5.8 percent of the cases compiled by the CDC contained information on the patient’s underlying health condition.

A 2016 study published in Open Forum Infectious Diseases found that only approximately 2.7 percent of adults in the United States are immunocompromised. That included 1.8 percent of men and 3.5 percent of women.

Similarly, in 2008 the Bulletin of the Atomic Scientists estimated that 3.6 percent of U.S. adults are immunocompromised but notes that figure may be underestimated and that the number has been growing.

The number of immunocompromised school staff Williams used appears to come from a survey of teachers conducted by the CEA in July of 2020 which found that 27 percent of teachers reported they were “high-risk due to a health condition.”

That figure is slightly higher than workers across the country and across all job sectors, including essential workers who continued working in public environments during the pandemic shutdown.

According to the Kaiser Family Foundation, a nonprofit focused on national health and health policy, 24 percent of all American workers have some risk factor that makes them more susceptible to COVID-19.

These conditions include diabetes, chronic obstructive pulmonary disease, heart disease, moderate to severe asthma, a functional limitation due to cancer and a body mass index above 40. KFF reached a similar number in its own study on teachers.

Individuals over the age of 65 are also considered higher risk for COVID-19.

A 2019 study by the Rockefeller Institute of Government found that in the 2016-2017 school year 11.2 percent of Connecticut teachers were over the age of 60.

The long and the short of it is that the claim that 15 to 30 percent of school staff are immunocompromised is astronomically higher than studies suggest.

Closer to this figure are the number of all workers with varying risk factors which is estimated at 24 percent, but this is not unique to public school employees, and is in line with CEA’s own survey.

Connecticut’s teacher unions are pushing for the school year to be delayed by two weeks and for school districts to meet their demands for better ventilated classrooms, more personal protective equipment for teachers and distance learning accommodations for teachers who are immunocompromised.

Under the terms of labor agreements with school districts Connecticut teachers are not legally allowed to strike but the union leaders did say they will name districts that are not meeting their demands.

Williams said that districts not capitulating to their terms is more the rule rather than the exception.

Williams is a former state senator who served as Connecticut Senate President Pro-Tempore from 2004 until 2015 when he left elected office and became executive director of Connecticut’s largest teachers union.