What Can Connecticut Learn From its Neighbors About Property Tax Limitations? 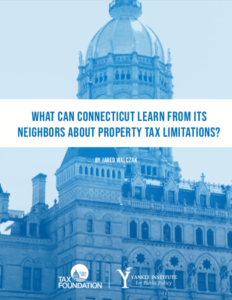 ** For the full study including charts and graphs, please download the PDF**

When Connecticut policymakers adopted an individual income tax in 1991, many hoped that it would take pressure off state sales taxes and local property taxes. Sales tax rates, hiked in the preceding years, came down—but the Nutmeg State’s property taxes remain among the highest in the country. As a percentage of housing value, Connecticut homeowners now pay 20 percent more than New Yorkers and almost 50 percent more than their Massachusetts peers. Those two neighboring states once had property tax burdens on par with Connecticut’s, but after more than eight years under a property tax limitation regime in New York and four decades in Massachusetts, the states’ respective property tax systems have diverged sharply.

Property tax limitations exist in some form in 46 states, but they vary in design or efficacy. Although they differ in some particulars, both the Massachusetts and New York laws are often cited as models for other states. This paper explores whether the example of two neighboring states can be salutary for Connecticut, reviewing the case for property tax limitations, evaluating potential concerns, considering different designs for such a system, and suggesting some best practices should Connecticut seek to join the ranks of those providing taxpayers with some measure of relief from rising local property tax burdens.