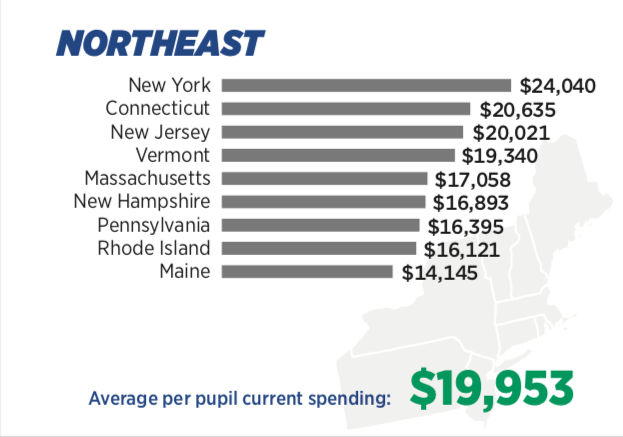 Connecticut spent more money per public-school student in 2018 than nearly every other state in the country, according to newly-released data from the U.S. Census Bureau.

Connecticut spent $20,635 per student, with only New York and Washington D.C. spending more per pupil. Most of the money went toward teacher and support staff salaries and benefits.

Average spending across the country was $12,612 per student, while the average per student in the Northeast was much higher at $19,953.

The Census Bureau listed Connecticut as having spent a total of $10.5 billion on education, with $10.1 billion going toward salaries and benefits for instructional staff and support services.

In 2014, Connecticut spent $9.3 billion in total on education, according to the Census Bureau’s 2014 report.

While Connecticut had one of the highest per student spending rates in the country, the data showed that most of the revenue toward education came from local governments.

The difference between Connecticut’s per pupil spending of $20,635 and total revenue is because capital expenses, debt service and interfund transfers are excluded from instructional costs.

Connecticut local governments accounted $13,427 per student in revenue – also the third-highest in the nation – while $8,743 came from state resources and $966 from the federal government.

Connecticut was the third lowest recipient of federal funds for education, according to the Census Bureau.

Education revenue and spending in Connecticut varies from municipality to municipality, with wealthier communities receiving less education funding from the state under the school funding formula and contributing more toward their schools from property tax revenue.

For instance, the Hartford School District receives 74 percent of its funding from the state, 18 percent from city residents and 8 percent from the federal government, according to the National Center for Education Statistics, totaling $23,920 per student.

As one of the biggest non-fixed costs in state government, however, the grants have been threatened with reductions in past budget proposals and adjustments to the funding formula have left some towns with less state funding than in previous years.

Connecticut also has a minimum budget requirement that prevents schools from reducing their education budgets. However there are exceptions to the rule for top-performing schools and those with declining enrollment or receiving reduced aid from the state.

Underperforming districts, known as Alliance Districts, are not able to reduce school budgets and receive more help from the state.