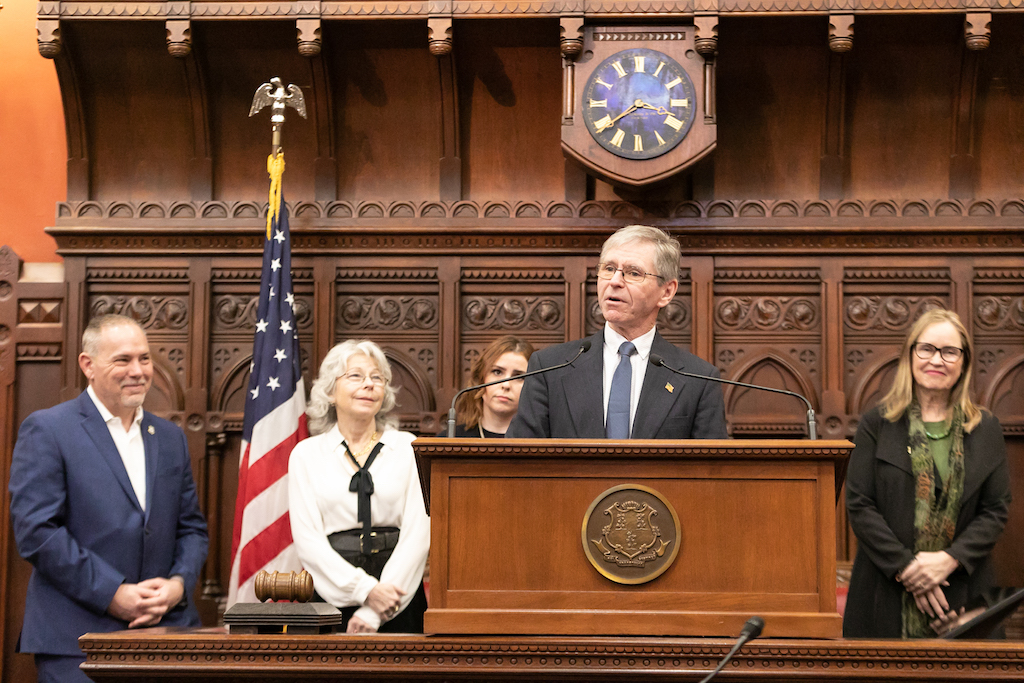 At his swearing in to the House of Representatives, newly-elected Democratic representative Brian Smith, D-Colchester, thanked Connecticut’s labor unions for helping secure his victory over Mark DeCaprio in the 48thdistrict to replace a Democratic seat left vacant by the death of Rep. Linda Orange.

“I would like to thank everyone who worked on my campaign, all my friends from Colchester, my family, my new friends in Lebanon, Windham and Mansfield who all came out and worked so hard, all the friends in the labor unions,” Smith said. “I’m looking forward to getting down to the business of the state, to work hard for the citizens of the 48thdistrict and all the citizens of Connecticut.”

Smith had the endorsement of the CT Working Families Party, which is supported by, and works with, Connecticut unions.

Smith was joined by Senator Chris Murphy at his Keep the 48thKickoff event on January 2 and by Lt. Gov. Susan Bysiewicz and House Speaker Joe Aresimowicz, D-Berlin, for a Day of Action rally on January 4, 2020. Aresimowicz is a long-time employee of AFSCME.

Smith’s opponent, Mark DeCaprio, garnered the support of No Tolls CT who held a rally and went door-knocking the weekend before his election.

According to the State Elections and Enforcement Commission, organizations supporting Smith outspent DeCaprio by 2 to 1, with a significant portion of their funding coming from labor unions.

The Mansfield Democratic Town Committee spent $2,495 in “organizational expenditures” and for a professional consultant to support Smith.

The committee received $2,700 from the United Auto Workers’ political action committee, the American Federation of Teachers CT and AFSCME Council 4 over the course of 2019 and early 2020.

Smith also received support from the House Democrats Campaign Committee and the House Majority Committee, totaling $2,025 for internet advertisements and a professional consultant.

The House Democrats Campaign Committee received $10,500 from various unions, comprising 46 percent of the $22,750 the PAC received from other committees over the course of 2019.

The House Majority Committee received $9,250 from union PACs, totaling 33 percent of the funds received from other organizations and committees in 2019.

There were no organizational expenditures listed by the Working Families Party or by union PACs toward electing Smith, although unions are not required to report political communications to their own members.

Despite a last-minute push by No Tolls CT, DeCaprio lost the district seat by 213 votes and the House seat remained Democratic.

“During this campaign, Brian made a clear case for progressive issues, and the importance of preserving the quality of life and the character of our towns – what makes Connecticut a unique place for families to live and thrive,” Farrell said.

Smith was sworn in on January 22, along with Brian Farnen, R-Fairfield, who won the House seat previously held by Brenda Kupchick.