Connecticut has $33 billion in unfunded OPEB liability, according to report 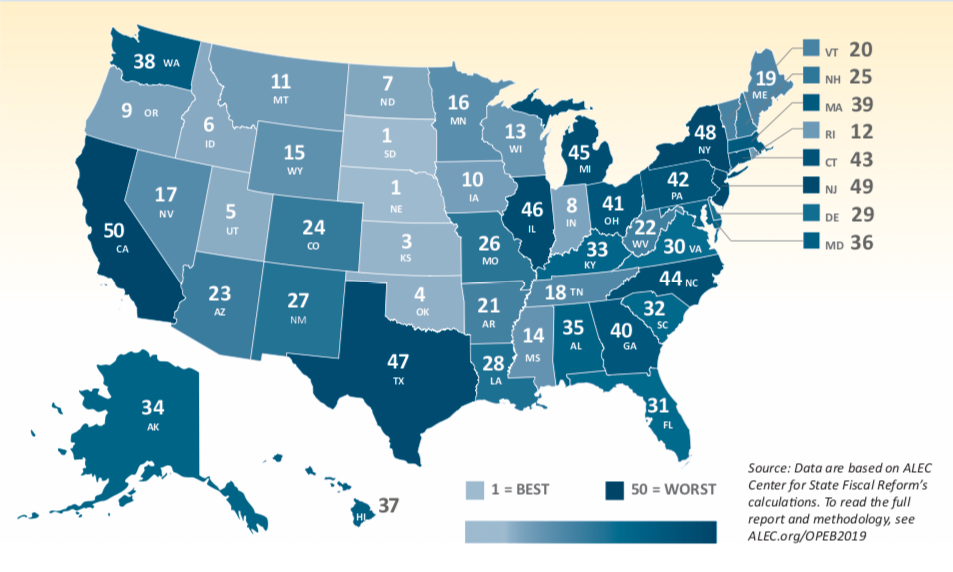 Connecticut has $33.6 billion in unfunded liabilities for its other post-employment retirement benefits like retiree health insurance, according to a new report from the American Legislative Exchange Council.

Connecticut ranked 43rd in the nation for its unfunded liabilities, besting New York and New Jersey, but behind its New England neighbors like Massachusetts and Rhode Island.

“Without real reforms, defined benefit OPEB plans will place a burden on taxpayers and other areas of state spending,” the report says. “As taxpayers bail out OPEB plans, revenue will be taken away from essential public services, opportunities for tax cuts will be lost, and state workers will see benefit cuts. No one wins.”

Connecticut’s OPEB costs are part of the state’s rising fixed costs, which now comprise 53 percent of the total state budget.

Fixed costs are projected to rise $1.5 billion between 2022 and 2024, contributing to future budget deficits as high as $1 billion, according to the state’s Office of Fiscal Analysis, which could spur another round of tax increases or service cuts.

Connecticut, in its own OPEB valuation, lists the state’s unfunded liabilities at $17.3 billion and the OPEB plan is only 3 percent funded. Connecticut’s OPEB costs amount to $1.2 billion per year.

The ALEC report considers Connecticut a “pay-as-you-go” state because the state’s OPEB funding is less than 1 percent based on a risk-free valuation and therefore ALEC assigns a lower discount rate than it does for states with more than 1 percent funding.

Other states which ALEC determined had more than 1 percent funding were given a 2.49 percent discount rate. Connecticut’s OPEB report notes that if the state used a similar rate of 2.68 percent, the state’s OPEB liability would increase to $20 billion.

While Connecticut’s unfunded pensions receive much attention in the state, the fact remains that long-term OPEB liabilities are also stacking up and show little sign of decreasing, due to Connecticut’s payment history and increasing medical costs.

Until 2011, Connecticut saved nothing for the retirement benefits of its employees, however, under the terms of the 2011 SEBAC deal made between Gov. Dannel Malloy and the State Employee Bargaining Agent Coalition, employees now have to contribute 3 percent of their pay toward their retirement medical benefits for their first ten years of employment, with the state matching that contribution starting in 2017.

But, as of 2017, the state did not pay its full actuarily determined contribution, which can lead to increased future liabilities.

Connecticut’s contribution, however, actually ranks 28nd in the nation for paying the annual required costs for OPEB liabilities.

The state has managed to save OPEB money by switching retirees over to the Medicare Advantage plan in 2017 and renegotiating prescription drug costs in 2019. Both measures were pushed by State Comptroller Kevin Lembo.

The ALEC report notes, however, that predicting future OPEB costs is more difficult than predicting pension costs because healthcare costs and policy is subject to rapid change.

Kansas, on the other hand, had to eliminate its OPEB altogether to tackle a budgetary crisis. Retirees can enroll in the state’s medical coverage plan for currently employees but must pay the full costs.

“By not pre-funding retiree health care, Kansas cut retiree benefits altogether when it could no longer afford to pay them,” the report says. “All states with pay-as-you-go OPEB plans run the same risk of being unable to fund retiree benefits when budget cuts need to be made.”