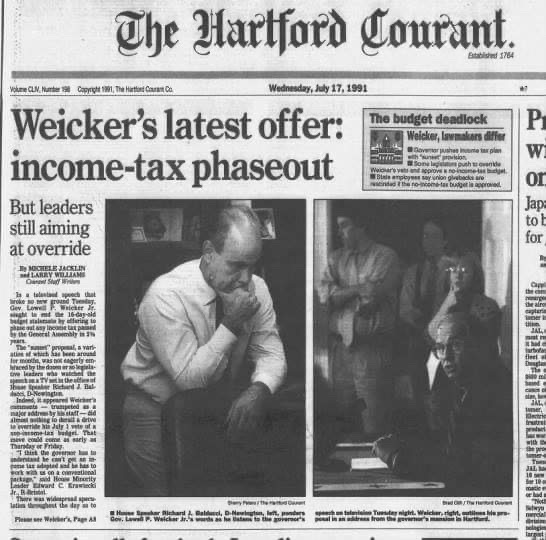 A CT Mirror article published on Nov. 21 pointed out that Connecticut’s income tax was never meant to be temporary, refuting a common talking point employed by lawmakers and political candidates, the public, No Tolls CT and, in one instance, the Yankee Institute.

The “myth” of the temporary income tax was tied to Gov. Ned Lamont’s pitch for his CT2030 transportation plan in which Lamont said toll gantries at 14 locations throughout the state would be temporary – a pitch that many people doubted.

The article rightly noted that there was no sunset provision included in the 1991 income tax legislation, and questioned how the temporary income tax idea had worked its way into the political consciousness.

But the roots of that “myth” may be in Gov. Lowell P. Weicker Jr.’s effort to garner support from the public and legislators to pass the Connecticut income tax.

According to a July 12 article in the Hartford Courant, Weicker’s budget “includes one unexpected wrinkle – a proposal to have the entire revenue structure expire in 1994 unless readopted.”

In a televised speech on July 17, 1991, Weicker offered to end the tax in 1993, which would have made the income tax essentially a one-year deal to boost state revenue.

According to the New York Times, Weicker “offered what he called a ‘fair compromise’ to automatically end the income tax in December 1993.”

Connecticut Speaker of the House, Richard J. Balducci, “said the so-called sunset provision for ending the tax at the end of 1993 was ‘nothing new,’” according to the New York Times — a tacit implication that sunsetting the tax was part of the political climate of 1991.

The Hartford Courant also reported on that speech: “In a televised speech that broke no new ground Tuesday, Gov. Lowell P. Weicker Jr. south to end the 16-day-old budget stalemate by offering to phase out any income tax passed by the General Assembly in 2 ½ years.”

“The ‘sunset’ proposal, a variation of which has been around for months, was not eagerly embraced by the dozen or so legislative leaders who watched the speech on a TV set in the office of House Speaker Richard J. Balducci, D-Newinton,” the Courant wrote.

“Weicker’s pitch was probably a trial balloon,” Markley said in an interview. “He didn’t say that when he proposed it in February. Anyone who voted for it thinking the tax would be temporary was fooling themselves.”

After the income tax was signed into law, both Republican and Democratic lawmakers attempted to repeal the tax but were vetoed by Weicker. A subsequent veto override fell 17 votes short.

According to a January 15, 1992 Hartford Courant article, Republicans and Democrats attempted other mitigation strategies, such as amending the tax to include a sunset provision as part of a tax cut for the middle-class.

Although no sunset provision for the state income tax was signed into law, the 1992 budget did create the Connecticut State Tax Review Commission that, according to the Connecticut Office of Legislative Research, was to “recommend a complete revision of the system or a revision to eliminate any direct taxes on income,” on December 15, 1992.

Although no sunset provision for the state income tax was signed into law, the 1992 budget did create the Connecticut State Tax Review Commission that, according to the Connecticut Office of Legislative Research, was to “recommend a complete revision of the system or a revision to eliminate any direct taxes on income,” on December 15, 1992.

The 15-member committee included four governor appointees, including William Cibes, Weicker’s budget director in 1991 and arguably the architect of the state income tax.

The remaining members were comprised of two chairmen and two ranking members from the Finance, Revenue and Bonding Committee and the commissioner of the Department of Revenue Services.

The State Tax Review Commission’s recommendations were decided by a majority vote and ultimately the commission recommended keeping the state’s new income tax.

Republican governors John Rowland and M. Jodi Rell also campaigned on doing away with the state income tax, although, once in office found that to be an impossible feat; the income tax was too large a source of revenue, and the state far too dependent on it at that point.

The repeated campaign promises by gubernatorial candidates likely added to the public’s belief that the state income tax would disappear at some point.

Lamont’s contender in the 2018 gubernatorial election, Bob Stefanowski, also campaigned on doing away with the state income tax, which is now Connecticut’s largest revenue stream.

Although sunsetting the income tax was never written into the budget – and the tax commission passed on the idea – Weicker’s administration and his struggle to implement the income tax bares a close resemblance to Lamont’s attempt to toll Connecticut highways.

Weicker was famously opposed to a state income tax before his election, saying a Connecticut income tax would be like “throwing gasoline on a fire,” but quickly reversed his position after taking office.

Similarly, Lamont campaigned on tolling only trucks but quickly reversed this pledge after taking office and then advocated for tolling all vehicles.

Both governors faced a resistant General Assembly and grew desperate for their premier policy goal to be approved: Weicker vetoed three budget bills that did not include an income tax, and Lamont has struggled to gain legislative support for his tolling plans, largely due to public disapproval and lawmakers’ reelection fears.

And both governors attempted to win over skeptical voters and lawmakers by pitching the tax increase or tolls as temporary in a last-ditch effort to gain support.

Carol Platt Liebau, president of the Yankee Institute, said lawmakers should be honest in their policy pitches to the public. “Sound public policy doesn’t need to be made with a mess of backroom deals and empty promises.”

Weicker recently offered his support for Lamont’s transportation plan, urging Democrat legislators to back the governor, although he stopped short of endorsing tolls specifically.

“The lesson we have to learn from the income tax is not that it will go away but that it will expand,” Markley said. “In the long-run, every new revenue source will eventually get around to costing you more money.”

Between 1991 and 2014, the state income tax took in $126 billion and is now the largest revenue source for Connecticut state government.

Meghan Portfolio contributed to this article.