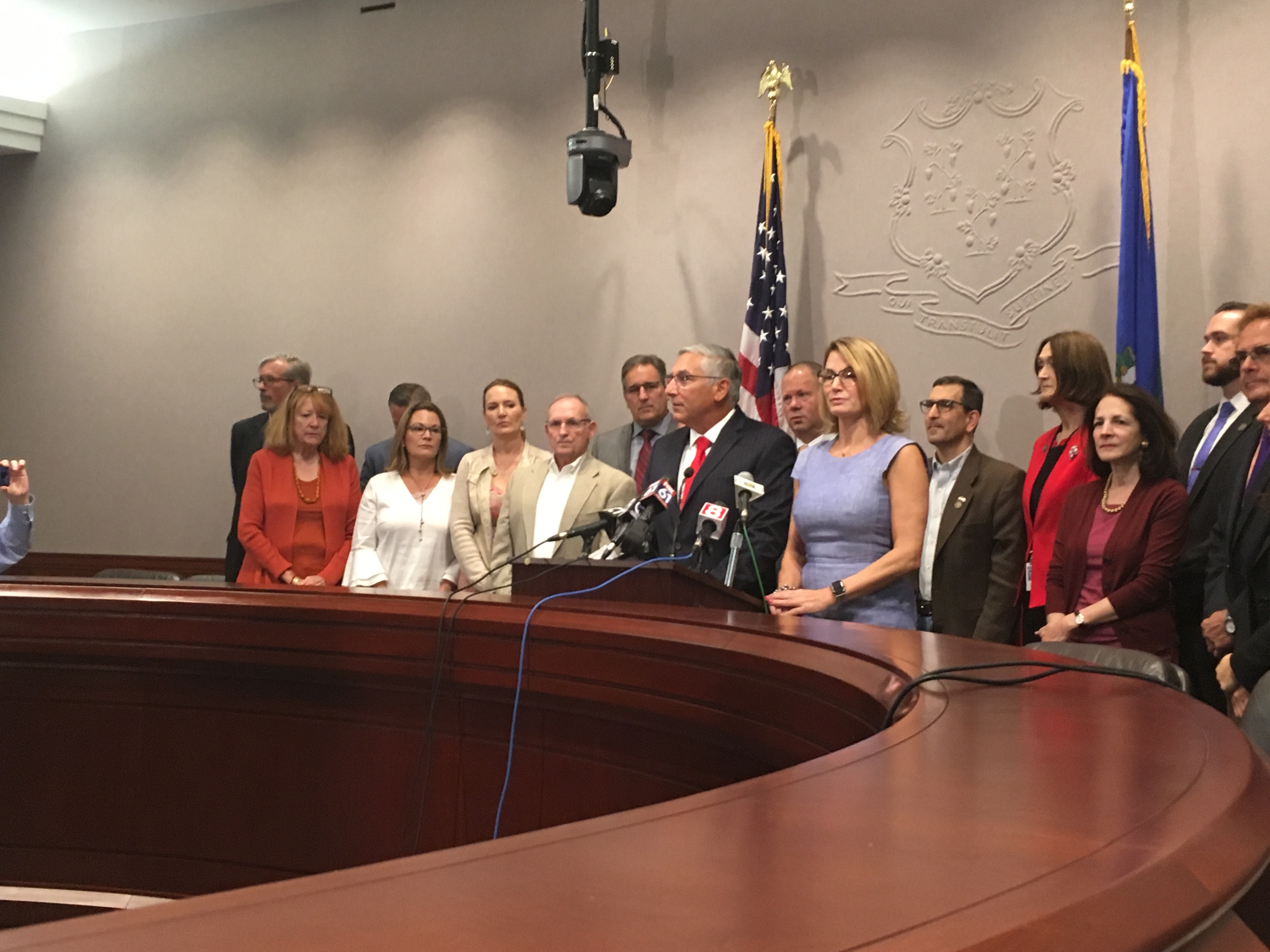 **Update: Gov. Ned Lamont announced Friday that the Department of Revenue Services will revise its guidance to eliminate the sales tax on items from grocery store aisles**

As Gov. Ned Lamont heads into meetings with Department of Revenue Services Commissioner Scott Jackson to discuss the agency’s guidance that certain grocery items be taxed, Senate and House Republicans announced they are petitioning for a special session to have the words “grocery store” removed from the sales tax statute.

“You cannot fix this by three, four, five people getting in a room and saying ignore the words of the statute,” Fasano said. “If they got it wrong – I get it – then you have to go back into special session and fix it.”

“Unfortunately, in this situation, they [Democrats] wrote this bill in the budget, they voted affirmatively on this budget bill and now they’re shocked and appalled by what they wrote,” Klarides said.

At issue is the inclusion of the term “grocery store” alongside traditional eating venues like restaurants that are subject to Connecticut’s sales tax.

The budget contained a 1 percent sales tax surcharge on restaurant meals and prepared meals, increasing the rate from 6.35 percent to 7.35 percent.

However, the addition of the term “grocery store” to statutory language led DRS to issue guidance saying all prepared, single serving items in the entire grocery store are potentially subject to the increased sales tax staring October 1.

Prepared, single meal food items from supermarket delis or small shops within the grocery store were already subject to the state’s sales tax under existing law.

Republicans argue the inclusion of “grocery store” was a back-door tax that will hurt poor and working families in the state. Democrats, on the other hand, say DRS is misinterpreting the language and they never intended to tax items sold off the grocery store shelf.

Outside the press conference, Rep. Bob Godfrey, D-Danbury, said he was tired of hearing it called a “grocery tax.”

“It’s not a tax on groceries,” Godfrey said. “Supermarkets went into the take-out food business and so they get taxed at the same rate as restaurants.”

Instead, lawmakers only receive “S-language,” which is a more generalized and shortened breakdown of the budget bill.

“When you have two words that make such a huge difference, to know whether or not that is actually in the bill is critically important,” Davis said.

Republicans said that, although they opposed the increased sales tax for restaurants that was part of the 2019 budget, they would be happy with removal of the term “grocery store” from statute, which would essentially return the state to its normal sales tax collection under current law.

Lawmakers can petition for a special session by gaining 50 percent plus 1 of members in both the House of Representative and the Senate. Republicans say they have signatures from almost all their members and are awaiting a few more, leaving the ball in Democrats’ court.

Gov. Ned Lamont could also call a special session but, thus far, has been focused on meeting with Jackson to review the department’s guidance on the issue.

Senate and House Democrats have also called on the DRS to revise its guidance in letters sent to Commissioner Jackson.

Senate President Pro-Tem Martin Looney, D-New Haven, also called for the co-chairs of the Finance, Revenue and Bonding Committee to meet with DRS to discuss the issue, in particular the fact that DRS did not offer testimony on the budget that alerted lawmakers to the potential tax expansion to grocery items.

The DRS issued a list of potential grocery store items that will be subject to the tax, which included protein bars, rotisserie chicken, small pre-packaged salads and bagels or muffins numbering less than six.

Klarides said it is the job of agencies like the DRS to interpret regulation and that the language in the budget was vague it subjects normal grocery items to a potential sales tax.

“Because it was so broad, and that’s what they relied on when they wrote it because they wanted the availability of another spigot or revenue as big as possible in this state to take from,” Klarides said.