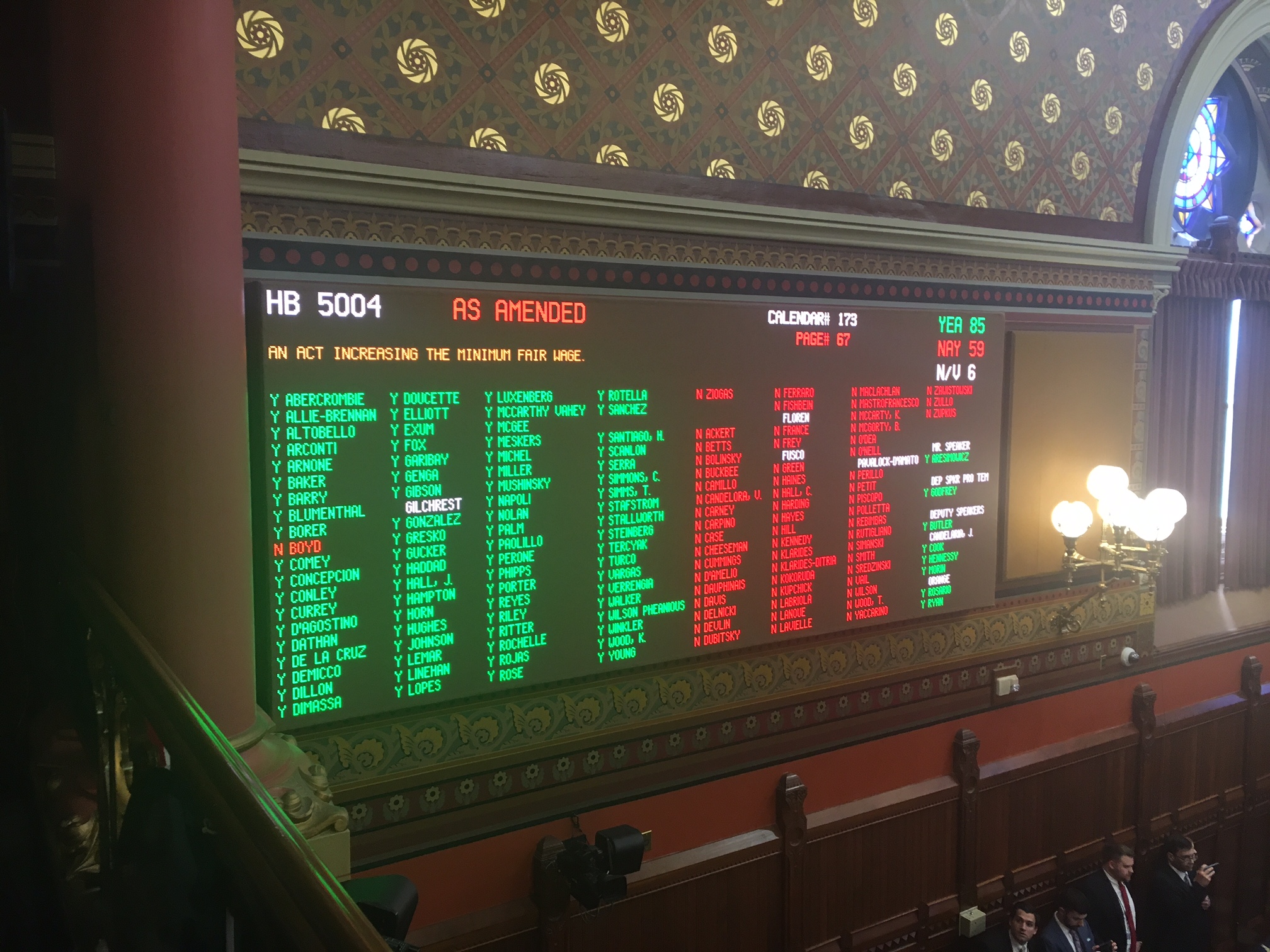 Republicans and Democrats in the House of Representatives debated for over 12 hours through the night and into the morning before approving an increase to Connecticut’s minimum wage to $15 per hour by 2023.

The vote was 85 – 59 with every Republican and two Democrats voting against the minimum wage increase.

Republicans called several amendments to the floor for a vote in an attempt to mitigate the effects of the increase, including exempting municipal employees and nonprofit organizations, but were blocked by Democrats holding a significant majority in the House.

The only significant change enacted on the House floor was increasing the time frame for the wage increase from 2022 to 2023.

The state’s minimum wage would then be tied to the federal Employment Cost Index, which can rise year over year, raising labor costs for Connecticut’s businesses, nonprofits and governments in perpetuity

According to the Bureau of Labor Statistics, the ECI for private industry worker compensation rose 2.8 percent in 2018.

The increase is projected to cost the state of Connecticut an additional $38 million when the wage reaches $15 and up to $1 million for municipalities.

The Office of Fiscal Analysis notes “the annualized fiscal impact to the state and municipalities would continue into the future subject to the number of workers and hours employed, and the minimum wage as adjusted annually by the federal ECI beginning in 2024.”

Rep. Josh Elliott, D-Hamden, one of the chief proponents of the minimum wage increase, said he favors tying the minimum wage to the ECI because inflation decreases workers’ buying power year over year.

“People rely on us to ensure the economy keeps on working or else it will completely stagnate because people will not have the money they need to actually pay for the things they deserve,” Elliott said on the House floor.

Rep. Tom O’Dea, R-New Canaan, said Connecticut will face job losses by raising the minimum wage. “We actually have less jobs now than we had in 2004,” O’Dea said. “We are the only state with negative GDP over the last ten years.”

Republican House Leader Themis Klarides, D-Derby, said that it is obvious Connecticut’s economy is facing severe problems and Connecticut is already considered one of the most “business un-friendly states in America.”

“Passing this law will get some people more wages, but it will cost more people their jobs,” Klarides said. “I don’t know how that helps the people of this state.”

Debates over the minimum wage increase ranged from its effects on young people to farms to the laws of economics and wage inequality, with Republican lawmakers reminding Democrats that the two sides worked together to form a bipartisan budget in 2017.

Nevertheless, tensions were high for tired lawmakers after a ten-hour debate.

Rep. Robyn Porter, D-New Haven, was tasked with answering Republican questions on the bill and at one point refused to answer a question from Rep. Stephanie Cummings, R-Waterbury, because she said she had answered the question several times during the night.

Cummings asked if Porter wouldn’t mind answering the questions again, to which Porter replied, “I do mind,” and then took her seat.

The bill will now go to the Senate for a vote where Democrats have a 22-14 majority. The $15 minimum wage is also supported by Gov. Ned Lamont.

Lamont issued a press release praising passage of the bill.

“If our economy doesn’t work for everyone, then it doesn’t work. It’s that simple,” Lamont said. “I applaud the action taken by the House today and urge the Senate to swiftly approve as well so that I may proudly sign this into law.”

President of Yankee Institute Carol Platt Liebau issued a statement saying the minimum wage increase is “another example of legislators being guided by ideology, rather than the reality of our state’s economic climate or the needs of its residents.”

“The people of the state deserve to see this bill pass,” Porter said during her closing speech before the vote.