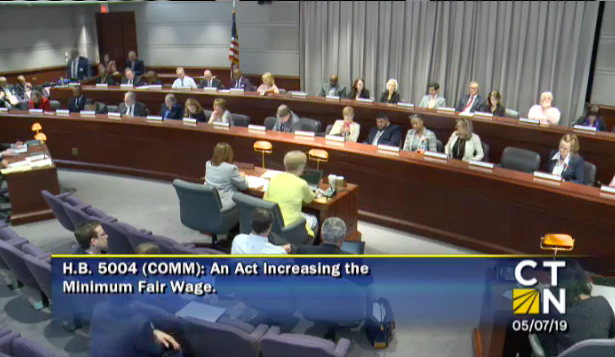 The Appropriations Committee today approved a bill to increase the state’s minimum wage to $15 per hour by 2022, costing the state an additional $40 million per year and costing municipalities up to $1 million per year.

The state’s minimum wage would then be adjusted each year starting in 2024 to match the Consumer Price Index.

Democrats dominate the Appropriations Committee and passed one of their top legislative agenda items on to the House of Representatives for a vote as early as tomorrow.

But raising the state’s minimum wage by nearly 50 percent and then in perpetuity could hit small businesses the hardest when Connecticut faces slow economic growth and three straight months of job losses.

Sen. Heather Somers, R-Groton, said Connecticut’s economy couldn’t handle the increase. “When we look at other states that have increased their minimum wage, they have thriving economies, they do not have this impotent economy that we have in the state of Connecticut,” Somers told the Committee.

“I think it is illegitimate for anyone on this Committee to say businesses can afford it. If you’re not an employer you don’t have the right to say that,” Somers said.

Wayne Pesce, president of the Connecticut Food Association which represents hundreds of grocery stores throughout the state, submitted testimony on the bill to the Labor and Public Employees Committee earlier in the year saying the increase was too fast for businesses to absorb.

But concerns regarding effect of the minimum wage increase were not limited to businesses alone.

Several lawmakers were concerned over effects the increase would have on nonprofit organizations that rely on Medicaid funds to pay workers but haven’t received – and aren’t scheduled to receive – an increase in funds from the state.

Deborah Hoyt of the Connecticut Association for Healthcare at Home said the state would have to increase Medicaid funds by 22 percent to make up for five years of cuts and unfunded mandates to home health agencies.

“A mandated wage hike to $15 would further the financial decline of our provider sector,” Hoyt wrote in her testimony to the Labor and Public Employees Committee.

A number of lawmakers hoped that some of those issues would be addressed in the bill.

Sen. Craig Miner, R-Litchfield, said that Committee members who were expressing doubts and hoping for changes to the bill should understand that there have not been any changes made to the bill since it was passed out of the Labor Committee.

“I sat through a whole day of testimony where nonprofits, for profits, people that run camps provided testimony to the Committee indicating the ramifications of this bill as its currently constructed will have in all of those different venues,” Miner said. “To my mind, it has fallen on deaf ears.”

“What we are proposing here is not sustainable,” Miner said.

Rep. Toni Walker, D-New Haven, downplayed the increase, noting that an employee making $12 per hour and working a 35-hour work week would earn $420 per week. Under the proposed increase, within 3 years they would earn “a whopping $525 per week to live.”

“Cost of living in Connecticut says you need to make at least $19.08 in order to make it, to afford it. That’s $667 per week,” Walker said. “That doesn’t leave any room for any quality of life that I know of.”

“I am very saddened by many of the conversations I’ve heard today,” Walker said. “Because we spend more time talking about what we shouldn’t do for people as opposed for what we should be doing for all the people of Connecticut.”

Speaker of the House Joe Aresimowicz, D-Berlin, said the minimum wage bill would likely be amended to allow four years for the minimum wage increase and have a youth exemption in the bill, as well as a possible changes to the “tip credit” for wait staff.

However, Aresimowicz said he wasn’t going to wait on bringing the bill up for a vote in the House.

At a press conference, Aresimowicz said he intends to bring the minimum wage bill up for a vote in the House as early as tomorrow.