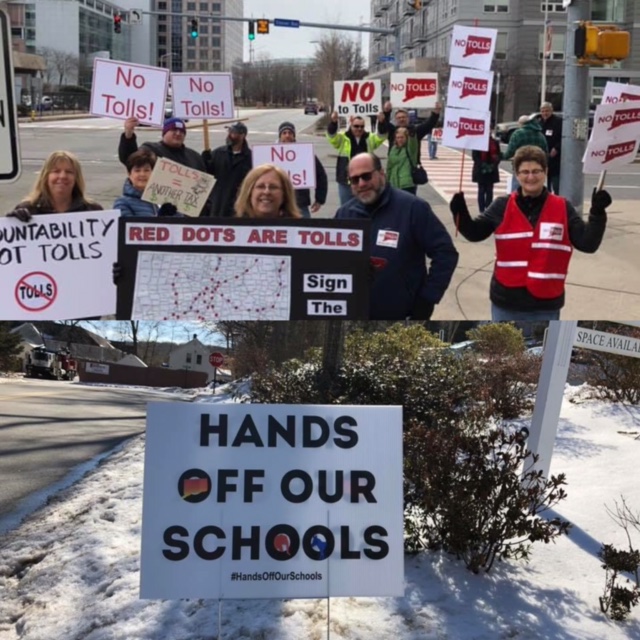 A pair of rallies over the weekend in Stamford and Ridgefield drew attention to the two most contentious issues emerging from the 2019 legislative session – electronic tolls on Connecticut’s highways and plans to force school districts to regionalize with larger districts.

No Tolls CT held a rally in front of the Stamford Government Center on Saturday just days after the city’s Board of Representatives’ Transportation Committee voted 6-0 urging the City Board to pass a resolution opposing tolls.

The Town of Enfield also passed a resolution opposing tolls, following a No Tolls CT rally in the town.

Patrick Sasser, head of No Tolls CT, estimates there were between 150 and 200 protesters in attendance, along with former Republican gubernatorial candidate Bob Stefanowski.

“We started this movement last year to fight tolls and we stopped it last year,” Sasser told the rally. “We’re going to do it again this year.”

The governor’s budget withholds sales tax revenue to the state Special Transportation Fund, depleting it of over $1 billion over the next five years, but calls for installing 53 tolling gantries on Connecticut highways to bring in a projected $800 million per year in toll revenue.

On Sunday, Hands Off Our Schools held a rally in Ridgefield to protest several bills which would force smaller school districts to merge with larger, neighboring districts.

A proposed bill from Senate President Pro Tem Martin Looney, D-New Haven, would force towns with populations less than 40,000 to merge their schools with neighboring districts; a bill from Senators Bob Duff, D-Norwalk, and Cathy Osten, D-Sprage, would force schools with less than 2,000 students to merge with larger districts; and the governor’s bill would form a commission to make regionalization recommendations in 2020, while withholding state education funds from towns that don’t regionalize.

The Hands Off Our Schools Rally heard from speakers including Drew Michael McWeeney, a special education

teacher in Waterbury, Rep. Gail Lavielle, R-Wilton, who serves on the state Education Committee and Sen. Will Haskell, D-Wilton, who said he would oppose any bill that forces schools to regionalize.

McWeeney told the crowd that he currently has the maximum number of children in a class to remain accredited by the National Association for the Education of Young Children. “What happens to my students when we consolidate schools? I get more kids.”

As a special education teacher McWeeney said it was hard for him to service ten children with long lists of needs and goals.

McWeeney also said the measure wouldn’t save money but actually increase costs due to transportation, benefits and salary changes and teacher pension costs. “It’s basically forced consolidation, and I don’t really think its democracy to think they can force things on us,” McWeeney said.

Lavielle told rally-goers that bills — like the governor’s — create commissions and studies, which then create pilot programs and eventually result in “edicts.”

Lavielle argued such long-term propositions not only leave Connecticut residents wondering what will happen to their schools, but potentially deter other families from moving into the state.

“Meanwhile, people are looking at Connecticut and saying ‘what is going to happen to the schools in this place? I’m not going to buy a house there,” Lavielle said, and warned that lawmakers will say they don’t support forced regionalization but may vote for a study which will lead to the same end result.

“This bill [the governor’s bill] creates a commission of people who have been elected by nobody, who do not represent you,” Lavielle said, noting the governor’s commission would turn in its recommendations after the 2020 legislative elections.

Hands Off Our Schools is planning a rally on Friday, March 1 at the Capitol when the regionalization bills will receive a public hearing before the Education Committee.

No Tolls CT has held a series of rallies across the state and is planning rallies in Danbury and Norwich on Saturday, March 2.

But the vociferous anti-toll movement has drawn push-back from some legislators.

Sen. Alexandra Bergstein, D-Greenwich, who introduced the first bill authorizing the Connecticut Department of Transportation to install tolls and serves as co-chair of the Transportation Committee told the Hartford Courant her constituents are “sophisticated and intelligent enough to understand the cost of not having tolls.”

Rep. Jason Rojas, D-East Hartford, and co-chair of the Finance, Revenue and Bonding Committee, tweeted “Here’s an idea. Every town that passes an anti-toll resolution gets their Town Aid Road, LOCIP and any other state aid for infrastructure eliminated. Cool?”

It was apparently not cool for Stamford representatives. Stamford Board of Representatives member Steven Kolenberg told the Stamford Advocate “It just proves to me that we can’t trust Hartford with the revenue that’s going to be collected for tolls.”

Rojas walked back his tweet in the Stamford Advocate article, saying he was posing a question rather than making a threat.