Lamont Budget: Cities Off the Hook for Teacher Pensions, While Towns Pay Big 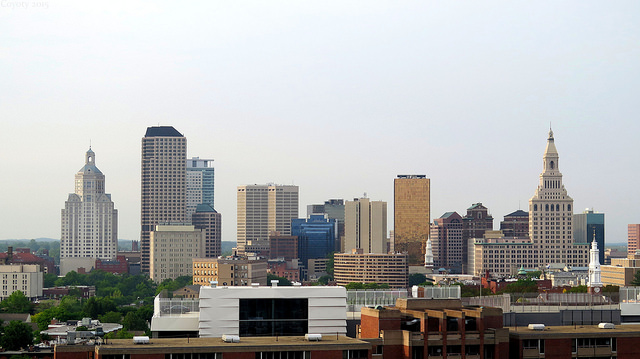 Gov. Ned Lamont’s budget proposes shifting 25 percent of the “normal cost” of teacher pensions onto towns and cities, but distressed municipalities will only have to shoulder 5 percent, which means the City of Hartford will have to pay far less in teacher pension costs than neighboring South Windsor.

Combined with an accelerated reduction in state education funding for a number of municipalities, some towns could suddenly see millions disappear over the next two years.

Under Lamont’s budget proposal, municipalities would contribute $49.2 million toward teacher pension costs by 2021, rising to $71.5 million by 2022, but the contribution requirement would not be distributed equally.

According to the governor’s budget, “towns with higher average pensionable salaries will contribute an additional percentage of their normal cost equal to their marginal percentage above the statewide median salary.”

According to municipal aid and teacher pension contribution tables in the governor’s budget, a town like South Windsor would see a reduction of $1.7 million between 2019 and 2021 and have to pay the state $575,145 in teacher pension costs by 2021.

Conversely, Hartford – a distressed municipality and part of the Alliance District of 30 struggling school districts – will see education funding increased by $5.9 million but only pay $350,858 for teacher pension by 2021.

As of 2017, there were 25 distressed municipalities in Connecticut, including four of its largest cities – Bridgeport, Hartford, New Haven and Waterbury – along with some small towns such as Sprague and Montville.

Those municipalities would only be required to pay 5 percent of the normal cost for teacher pensions. Conversely, wealthier towns that pay higher salaries to teachers will have to contribute a higher rate.

The governor’s budget accelerates funding reductions to towns which were scheduled to experience losses under the 2017 Education Cost Sharing formula change, which will leave towns not only paying for part of teacher pensions, but also seeing sizeable reductions in state education aid much quicker than expected.

Connecticut’s struggling cities will largely see millions more in education grants but hardly pay anything in teacher pension costs because they fall under the category of distressed municipalities and are part of the Alliance District of 30 struggling school districts, shifting more of the teacher pension burden onto smaller towns and suburbs.

Those shifts in education funding combined with teacher pension payouts could wreck havoc with town municipal budgets and property taxes.

But Betsy Gara, executive director of the Connecticut Council of Small Towns, says that some towns need to pay their teachers more even though it will affect how much they would have to pay toward pension sharing costs.

“They need to pay their teachers more so they can afford to live in their area,” Gara said in an interview. “They’re being penalized for providing attractive salaries.”

The average teacher salary in Connecticut is $80,562, according to the Teacher’s Retirement Board actuarial evaluation. The median salary may differ, but based on numbers presented in the latest valuation, median salary is likely in that range.

Gara also pointed out that towns have little control over rising costs of teacher salaries. Teacher salaries and pay scales are built into collective bargaining agreements, which are subject to binding arbitration.

“Contract negotiations generally try to mitigate the increase, but you’re not going to see any reductions,” Gara said. “It’s generally out of towns’ control because of binding arbitration.”

The governor’s proposed budget did provide for a neutral arbitrator for contract negotiations, something COST has sought for years, but that small concession to toward towns will likely not be enough to make up large reductions in education aid and teacher pension costs outlined in the governor’s budget.

All of this, if passed, could affect property tax rates a number of municipalities, particularly for those already struggling with tight margins.

Gara worries that if the teacher pension sharing measure passes, it could just be the beginning for town and cities across the state.

It’s something towns are going to struggle to afford,” Gara said. “I wouldn’t be surprised if that percentage keeps going up over time.