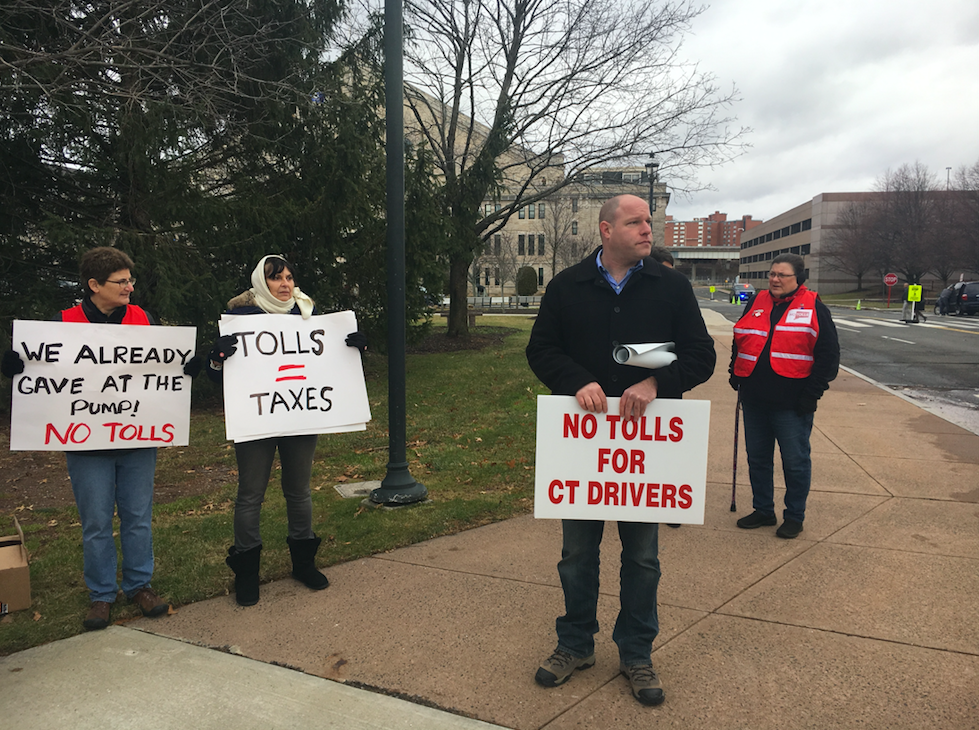 On a cold, blustery morning a small cadre of people gathered across from the Connecticut Legislative Office Building wearing red vests and carrying signs that made their position clear for the new governor of Connecticut: No tolls for Connecticut.

Over the course of the day supporters wandered in and out of the group. One woman banged on a drum like a marching brigade and Patrick Sasser – head of the growing group, Say No to CT Tolls, and co-owner of a small trucking company in Stamford – talked with newspaper reporters and television crews. 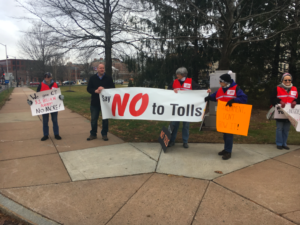 “It’s our turn this year to start the anti-toll protest and make sure our voices are heard and make sure the new governor knows there are still thousands of people in our state that oppose tolls,” Sasser said. “We’re out here and we’re going to fight this till the end.”

Sasser’s comment were echoed by others in his group who say Connecticut lawmakers have to fix the state’s problems with the money they already have rather than raise more revenue through tolling drivers.

“I’m out here because Hartford needs to get their house in order fiscally before asking us for more money,” said Middletown resident Meghan Portfolio. “They’re asking for more money but they’re not managing the money we’re already giving them.”

Greg Randall, a big-rig truck driver from Bristol said he drives a car 80 miles round trip every day from his home in Bristol to Enfield to pick up his truck. “I’m directly affected by having to pay tolls to drive to and from work.”

Connecticut’s new governor Ned Lamont has said he would only toll large trucks, but even before his 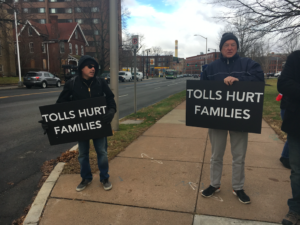 Randall says tolling trucks would just raise the price of goods for people in Connecticut. “They’re [trucking companies] are going to transfer all that extra money they have to pay onto our groceries and inadvertently tax us at the grocery store for that. Both ways, we’re still going to get taxed,” Randall said.

Shortly after the state’s gubernatorial election, the Connecticut Department of Transportation released a new tolling study which had been kept under wraps for months. The study proposed 82 tolling gantries on all of Connecticut’s highways and offered a pricing schedule to give discounts to in-state commuters.

According to the study, the plan would raise nearly $1 billion in revenue per year. With the changes made to pricing for Connecticut residents, the study estimates Connecticut drivers would still pay nearly 60 percent of the tolling revenue – down from the 70 percent estimated in the 2015 tolling study.

But Jennifer Shafer, who hosts a radio show on WESU 88.1FM under the moniker JCherry, says the tolls would cost her and her husband “$1,000 per year.” 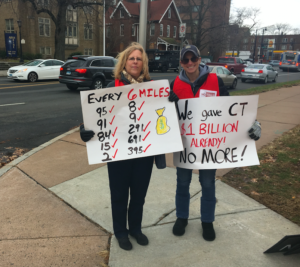 Shafer said. “Where is the money we already paid? The people of this state do not have the money to pay for these tolls.”

But many lawmakers, particularly those in the Democratic Party who now control the House, Senate and Governor’s office, disagree.

Tolls were labelled one of the top five priorities by Democrats following their election sweep in November, along with raising the minimum wage, establishing paid family medical leave, and the legalization of sports betting and marijuana.

Advocates for paid family medical leave and marijuana legalization were also inside and outside the Capitol, making their voices heard as well.

Former Governor Dannel Malloy made his pitch for a higher gas tax and tolls in January of 2018, warning the state’s Special Transportation Fund was out of money and halting 400 projects across the state.

Connecticut Republicans note that during the last bi-partisan budget, they managed to keep the STF solvent for the next few years and say they can continue infrastructure investments without resorting to higher taxes and tolls.

While Lamont has called only for tolls on big trucks, that proposal already faces a legal challenge in Rhode Island and some question whether tolling only trucks would generate enough revenue to make installation and operation of the tolling gantries worthwhile.

Although the Say No CT Tolls group was small, they did manage to get the attention of Governor Lamont as he made his way down Capitol Avenue.

Responding to the groups’ cries of “No Tolls,” Lamont at them and said, “We’ll talk.”

Sasser said he looks forward to meeting with the newly elected governor.