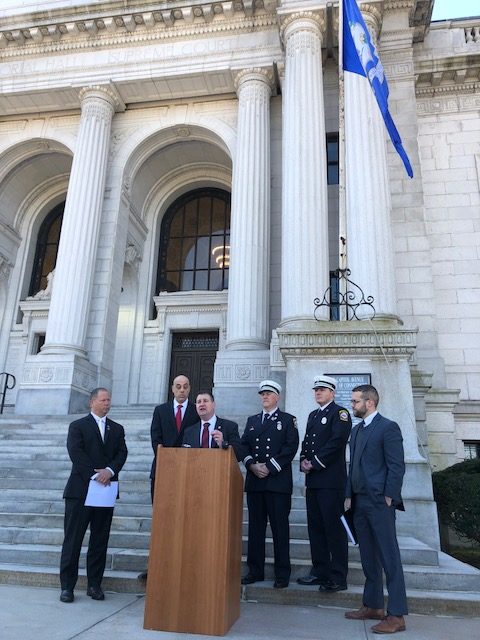 Superior Court Judge Thomas Moukawsher ruled Monday that New Haven Fire Fighters Local 825 had the right to disaffiliate from the Uniformed Professional Firefighters Association of Connecticut, ending a years-long dispute between the local and the state union.

Moukawsher also allowed Local 825 to move forward with their claim that UPFFA breached its fiduciary responsibility with “questionable expenditures” and “suspicious ‘mistakes’ with PAC fund balances,” according to the ruling.

Local 825 is seeking $96,000 from the state union for dues money it says was improperly spent on activities unrelated to legislative representation.

“To support its demands for money, the court has heard evidence from the local of questionable expenditures from the state union, including personal travel that may not have been reimbursed, suspicious ‘mistakes’ with PAC fund balances, and the admission of a plainly improper loan the state union took (and repaid) from its charitable affiliate,” Moukawsher wrote.

Local 825 attempted to disaffiliate from UPFFA in January of 2016 but the state union said their notification missed the September 2015 window for informing the UPFFA of their wish to decertify.

The state union also claimed such notifications must be made by certified mail rather than email and therefore Local 825’s notification was not valid.

The state union continued throughout 2016 and 2017 to attempt to collect dues from the New Haven Fire Fighters, employing a collections agency to get the dues money.

Moukawsher agreed that Local 825 had not informed UPFFA in a timely manner of their desire to disaffiliate in 2016 and therefore is responsible for dues that year.

However, he also wrote that UPFFA should have acknowledged Local 825’s right to disaffiliate in 2017 and ceased collection actions. Moukawsher said the need for a certified letter is a matter of “form over substance” and was not cause for UPFFA to continue collection actions after 2016.

He also noted UPFFA was well informed of Local 825’s wishes, as officials from the two organizations met several times to discuss the matter.

Local 825 hopes they can offset the cost of its 2016 dues by showing improper dues spending by UPFFA. Moukawsher granted Local 825’s injunction to look into UPFFA’s finances and spending.

Nathan McGrath, vice-president of the Fairness Center and the attorney representing the New Haven Fire Fighters said in a press release that “injunction motions of this nature are notoriously hard to win.”

“The core of this case was Local 825’s right to disaffiliate from UPFFA, which has now been decided in our client’s favor,” McGrath said. “We look forward to the next stage of this litigation and having the opportunity to prove that our client’s money was misused by UPFFA, so our client can be made whole.”

Local 825 remains a member of the International Association of Firefighters.

By Marc E. Fitch January 14 , 2021 Labor, Transportation
CTtransit in Hartford, a division of the Connecticut Department of Transportation, has been issued a serious violation notice and a…
Read More

By Marc E. Fitch December 17 , 2020 Labor One Comment
The Gold Star Memorial Bridge crossing the Thames River between New London and Groton is due for an overhaul and…
Read More