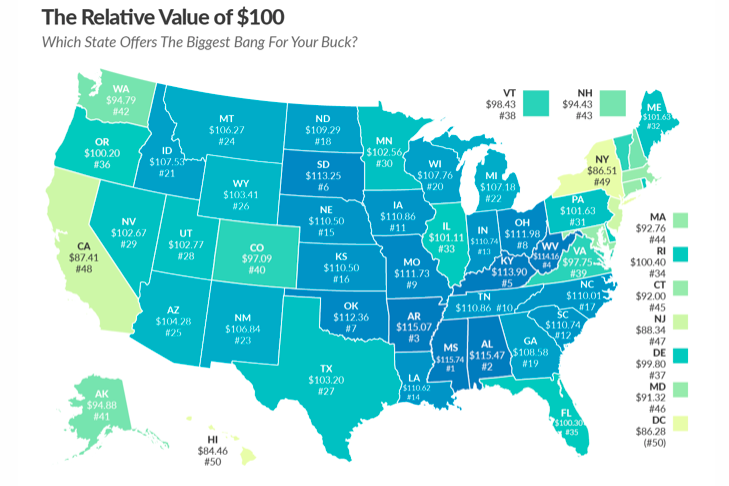 A dollar may not go very far these days, but according to an analysis by the Tax Foundation, even $100 doesn’t go very far in Connecticut.

The Washington D.C. based nonprofit foundation used 2016 data released by the Bureau of Economic Analysis to determine which states get more value per $100 by comparing the price of goods in the state to the national average price.

Connecticut placed 45th in the nation, meaning $100 is only worth $92, compared to the rest of the country.

While low on the list, Connecticut residents’ comparatively high income makes a difference. According to the Tax Foundation, states with higher incomes have a higher cost of goods.

In general, the Northeast performed poorly. States like New York, Connecticut and Massachusetts have high incomes and high costs of living, which decreases the value of a dollar.

Connecticut placed much better than New York, where $100 was only worth $86.51, but fared slightly worse than Massachusetts and New Hampshire.

The Tax Foundation pointed out that residents in some states like South Dakota are actually considerably wealthier than their income would suggest because of their purchasing power.

“South Dakotans are, for the purposes of day-to-day living, 13 percent richer than their incomes suggest,” the report said.

“This has substantial implications for public policy, which is often progressive with respect to income,” the Tax Foundation wrote. “Many policies — like minimum wage, public benefits, and tax brackets — are denominated in dollars. But with different price levels in each state, the amounts aren’t equivalent in purchasing power.”

A 2018 poll by Sacred Heart University Institute for Public Policy showed 93.6 percent of respondents said Connecticut’s high cost of living was their greatest concern, while taxes accounted for 90.9 percent.

Sixty-one percent of respondents said it was “difficult” or “very difficult” to maintain their standard of living in Connecticut.

Connecticut’s personal income growth has lagged behind every other state, even as consumer prices and the state’s tax burden increased.

Connecticut’s personal income growth measured only .6 percent between 2007 and 2017, far below the national average of 1.6 percent.