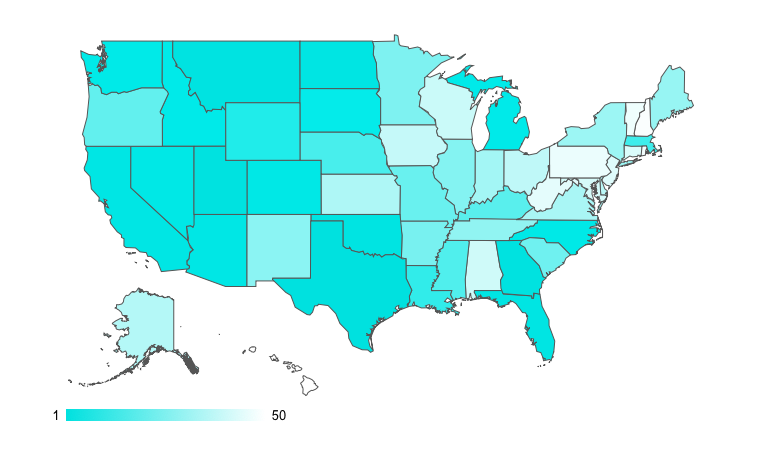 Connecticut ranked 43rd in the country in Wallethub’s annual ranking of Best and Worst States to Start a Business.

The study measures business environment, access to resources, and business costs to determine which states are “the most fertile grounds in which to launch and grow an enterprise.”

Connecticut ranked 4th in the country for access to resources due to its educated population, but was dragged down by its business environment which ranked 42nd and business costs which ranked 46th.

Connecticut’s ranking was slightly improved from last year when it placed 44th in the country.

Connecticut’s 2018 position was better than that of some competing states. Rhode Island, New Jersey and New Hampshire all ranked lower.

Although both states ranked similarly to Connecticut in terms of business costs and access to resources, their business environments measured better than Connecticut’s.

Business environment was based on the number of start-ups, how long businesses survive in the state and job growth, which may have hurt Connecticut’s score.

Connecticut, New York and Massachusetts are all considered high-tax states with similar costs of living, but Connecticut’s economy has struggled since the 2008 recession and has yet to regain all the jobs lost during the economic downturn.

Wallethub noted that “bad location” is the most common reason for business failure. “Choosing the right state for a business is therefore crucial to its success,” the study noted.

“A state that provides the ideal conditions for business creation — access to cash, skilled workers and affordable office space, for instance — can help new ventures not only take off but also thrive,” the report concluded.

Texas took the top spot in the country for starting a business, followed by Utah and Georgia.