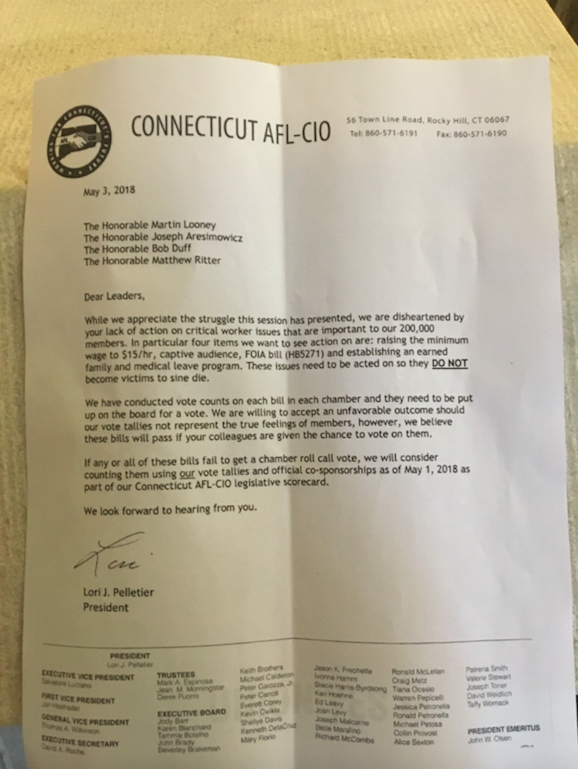 A letter from Connecticut AFL-CIO President Lori Pelletier to Democrat leaders in the House and Senate says a failure to bring several bills to a vote in either chamber will affect their “legislative scorecards” kept by the union. An image of the letter was sent anonymously.

“While we appreciate the struggle this session has presented, we are disheartened by your lack of action on critical worker issues that are important to our 200,000 members,” Pelletier writes. “In particular four items we want to see action on are: raising the minimum wage to $15/hr, captive audience, FOIA bill (HB 5271) and establishing an earned family and medical leave program.”

“If any or all of these bills fail to get a chamber roll call vote, we will consider counting them using our vote tallies and official co-sponsorships as of May 1, 2018 as part of our Connecticut AFL-CIO legislative scorecard.”

The AFL-CIO’s legislative scorecard tells whether or not a senator or representative’s vote was “wrong” or “correct” on a number of union-supported bills. The votes are used to assign each lawmaker a score, which is then used for election campaigns.

With only one day left in session bringing those bills to a vote may prove difficult, but it is reported that a renewed effort is being made to pass a higher minimum wage.

CT Mirror reported that House leadership is pressing for a higher minimum wage, but not necessarily $15 per hour.

Both the higher minimum wage bill and the family medical leave proposal come with hefty fiscal notes, potentially costing the state upwards of $100 million if they were both passed.

Although enjoying a windfall of revenue this past month, lawmakers are still trying to solve this year’s budget deficit. Connecticut faces a multi-billion deficit in the next budget.

The letter also demands action on the “captive audience” bill, which would limit employers’ ability to discuss unionization efforts or politics with their employees. Attorney General George Jepsen said the proposed legislation was pre-empted by federal labor law.

The Freedom of Information bill mentioned in the letter would expand the state’s FOI regulations to include any “commission, task force, working group or other body created in statute by the General Assembly, including a 501(c)(3) tax-exempt organization.”

Earlier in the year, the Connecticut Citizens Action Group and the Connecticut chapter of Common Cause filed a complaint with the Freedom of Information Commission alleging they were being denied access to information about the Commission on Fiscal Stability and Economic Growth — a study group made up of Connecticut business leaders and supported by a 501(c)(3).

With less than a day to go before the legislative session comes to an end, Pelletier — who is not a registered lobbyist — wrote that these issues must be acted on before running out of time.