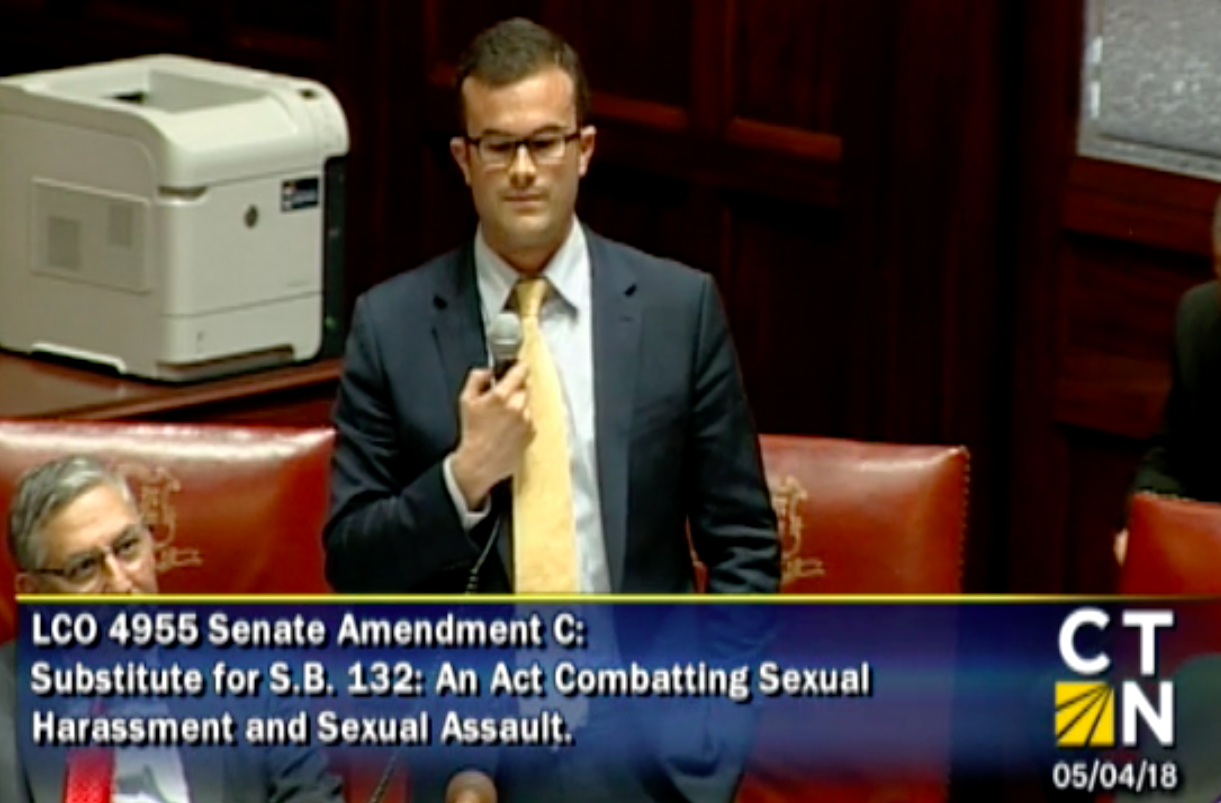 A late night amendment to the Senate’s sexual harassment bill — passed in the early morning hours of May 4 — would require the attorney general to initiate court proceedings to remove a state employee’s pension if they are convicted of sexual assault while on the job.

Sen. Art Linares, R-Westbrook, called for the Republican amendment in response to reports confirming former state employees convicted of sexual assault and rape in the course of their duties are still eligible to receive their state pension.

Linares said the amendment was a “logical addition to the bill.”

“I can’t fathom that state employees could be convicted of aggravated sexual assault on the job and still retire with their pension,” Linares said in an interview. “This change would prohibit that.”

The amendment passed 30 – 6 in the Senate, with Sen. Mae Flexer — a self-described outspoken advocate for women’s rights and co-sponsor of the new harassment legislation — one of six Democrats who voted against the language.

On the Senate floor Flexer said she worried the amendment would limit statutory language from 2008 which allows pension revocation for the conviction of any crime on the job.

The Attorney General’s office has repeatedly affirmed that pension revocation is only limited to financial crimes, according to state statute.

Linares answered by pointing out current law continues to allow those convicted of sexual assault while on the job to receive their pensions.

Linares cited Ellis K. Hagstrom, who was convicted of raping two disabled women for years while employed by Connecticut’s Department of Developmental Services. Both the State Comptroller’s Office and the Attorney General’s Office have confirmed Hagstrom remains eligible for his pension.

The Attorney General’s office said Hagstrom’s convictions “do not qualify as predicate convictions” in a 2016 article by Yankee Institute, and said they are barred from pursuing any action to revoke his pension.

Flexer also questioned why the amendment wasn’t more expansive to include other crimes. “We can’t just be having knee-jerk proposals,” Flexer said. “And I’m concerned that this is not looking at a broader set of felony crimes.”

Linares said the provisions of the bill could be expanded in the next session.

Although the language of the bill does not automatically revoke a state employee pension if there is a conviction, it provides guidance for the court in determining whether or not a pension should be revoked or reduced.

According to the amendment, the court will revoke or reduce a pension based on the severity of the crime related to their state office; the amount of money lost by the state or quasi-public agency; the severity of the violation of public trust; whether or not the crime was part of a fraudulent scheme and any other factors the court deems necessary to achieve justice.

The passage of the amendment — part of a bill expanding sexual harassment training and eliminating statutes of limitation for the victims of sexual assault — comes amidst the national #MeToo movement, and finishes what Senator Richard Blumenthal attempted in 2008 when he was Connecticut’s attorney general.

Blumenthal tried to revoke pensions for state employees convicted of sexual assault, but the changes limited pension revocation to financial crimes only.

Sen. Duff, D-Norwalk, questioned the legality of revoking a pension which is part of a labor contract between the state and the employee and expressed concern the measure would be challenged in court.

Linares responded that the legislation passed in 2008 set a precedent and this amendment would expand on that precedent.

“It seems like it was a good bi-partisan idea then and it’s a good bipartisan idea now,” Linares said. “The attorney general should have this responsibility incumbent upon them.”

Duff voted in favor of the amendment.

The bill now goes to the House for a vote.

“My hope is that there will be no changes to the amendment prohibiting pensions for employees convicted of sexual assault,” Linares said.