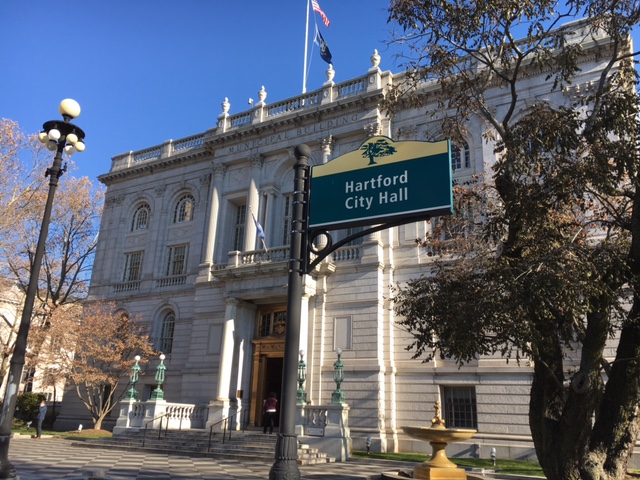 Hartford’s five year recovery plan will fall into deficit by year three despite the state paying Hartford’s debt, according to the plan submitted to the state’s Municipal Accountability Review Board, tasked with overseeing Connecticut’s beleaguered capital city.

“The City of Hartford should be immediately classified as a Tier IV and should relook at going into bankruptcy,” said Bart C. Shuldman, Chairman and CEO of Transact Technologies and member of the MARB, in an interview.

A Tier IV classification would give the MARB extended power over the city’s finances, including approval of debt restructuring and serving as an arbitration panel in disputes between labor unions and the city.

Despite the state of Connecticut covering Hartford’s debt service payments for the foreseeable future — something in dispute between legislative leaders and Gov. Dannel Malloy — the city slips into a $2.5 million deficit by fiscal year 2021, which grows to $9.4 million by 2023.

“The bottom line,” Shuldman said, “is that in year three, even with the state covering $36 million in debt payments, Hartford runs into deficit.”

Hartford Mayor Luke Bronin said that balanced budgets are achievable, but not without further savings and economic growth.

“With the agreement that was reached with the State, we will be able to run balanced budgets in the next five years – but not without continuous work to achieve savings, and not without economic growth,” Bronin said in a statement. “Those projections highlight exactly what we’ve been saying, which is that even with the agreement with the State, our budgets will remain very tough and very tight for years to come.”

The 2017 budget included additional assistance for Hartford to pay its debt service. However, Malloy signed an agreement with Hartford to refinance its debt for the next 20 years at a cost of $550 million.

Republican and Democratic leaders said they never intended to bail out Hartford for 20 years and have indicated they may cut back on other state aid to Hartford to make up the difference.

But any reduction in state aid, resistance to additional state aid to Hartford, or a change in the state’s debt service payments will send the city spiraling into severe deficit.

In a statement issued Friday, Bronin responded to Republicans’ budget proposal saying, “The worst, most irresponsible thing we could possibly do is to keep the city afloat for two years without building a long-term solution,” and added that bankruptcy for Connecticut’s capital city would result in “permanent crisis” and be “bad for Connecticut.”

In 2017, CEOs from Aetna, Travelers Insurance and The Hartford pledged $10 million in aid for Hartford over the next five years. However, earlier this year CEO of The Hartford, Christopher Swift, told the Hartford Courant that corporate support was “always conditioned on the city having a stable future.”

Those capital funds also dry up in year three, dropping from $20.1 million per year to $4.6 million per year. Essentially, the city will not have enough money for capital improvement projects.

In a letter to his fellow board members, Shuldman writes the board “does not know” if the the state will increase Hartford’s municipal aid, and that support from local corporations is not indefinite. “Clearly, once these payments end, the City of Hartford cannot fund their capital needs as the proposed 5-year plan goes into deficit in year four.”

Connecticut may be faced with another multi-billion dollar deficit during the next biennium, which could severely affect municipal aid to all towns and cities.

In his letter, Shuldman says the state of Connecticut must demonstrate the “intent and wherewithal” to continue funding the City of Hartford for at least the next five years.

“My guess is the State does not have the wherewithal to be able to fund the City for the next five years,” Shuldman wrote. “If so, that triggers the discussion of the City as a going concern; unable to satisfy their current and future liabilities from their assets and sources of revenue.”

The MARB is scheduled to meet again on May 3.