Connecticut home value growth slowest in the nation, struggles under shadow of 2008 recession 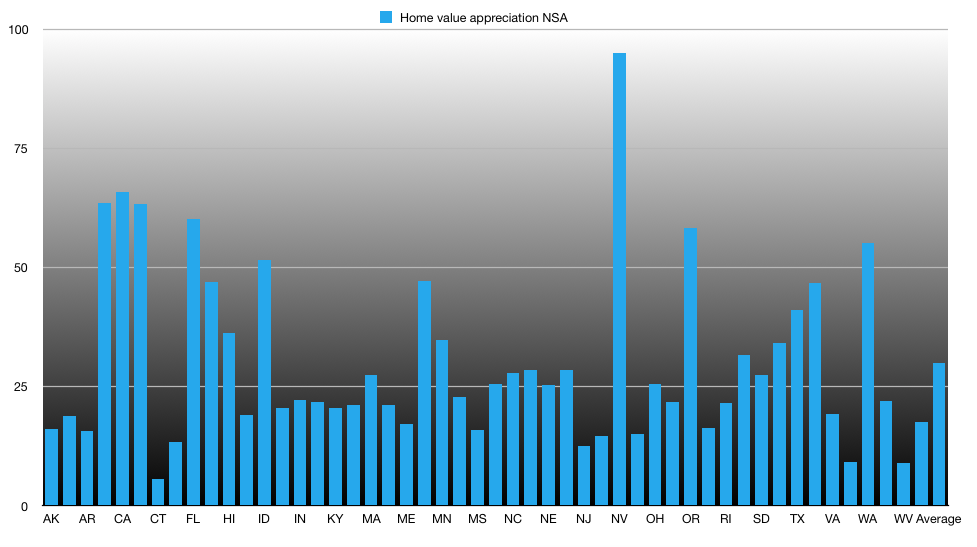 Connecticut’s Housing Price Index saw the lowest growth in the nation between 2012 and 2017, according to a review of figures from the Federal Housing Finance Agency.

Connecticut’s HPI grew 5.5 percent over the course of five years, far lower than the national average of 30 percent and well below other states in the Northeast. Massachusetts grew by 27 percent, while New York grew by 15 percent.

The struggling state of West Virginia saw the second-slowest growth in HPI of 8.3 percent. Nevada saw, by far, the highest home value growth in the country.

The Housing Price Index is a “broad measure of the movement of single-family house prices in the United States,” according to the FHFA and the numbers do not look good for Connecticut.

President and CEO of Connecticut REALTORS Michael Barbaro says these figures “are in line with what we’ve seen.”

Connecticut’s housing market is “defying the laws of economics,” Barbaro said in an interview. “We have low inventory and flat prices. Normally, with low inventory we should have high prices.”

Barbaro believes that many people who purchased homes before the housing market crash and recession of 2008 may still be underwater on their mortgages and can’t afford to get out from under their current houses.

“A lot of houses are priced high and sitting on the market a long time,” Barbaro said. “That might mean people can’t afford to buy out of their mortgages.” Barbaro also says they haven’t seen a lot of people upgrading to larger homes.

“I think Connecticut is still feeling the effects of the recession and the housing market crash. We just haven’t come back from it yet,” Barbaro said.

Permits for new houses remained relatively flat over those five years with 300 less permits being granted for new houses, according to the Connecticut Department of Economic and Community Development. But the numbers are half of what they were before the housing market crash.

Economically, Connecticut has been one of the slowest states in the nation to recover from the economic shock of the 2008 recession. The state has yet to recover all the jobs lost during that time and personal income growth is far below the national average.

Concurrently, the state has seen a pronounced loss of residents to other states in the last three to five years.

“The health of the local labor markets and local housing market go hand and hand in the long run,” Klepper-Smith said in an email. “Meaning traction in the local jobs picture often translates into increased demand for housing and rising home values.”

To date, Massachusetts has recovered more than 300 percent of the jobs lost during the 2008 recession.

Connecticut is one of the few states losing population, according to a number of U.S. Census Bureau reports and the annual National Movers Study.

Numbers from the Internal Revenue Service showed that in 2015 the largest group of individuals leaving the state earned over $200,000 annually, all of which puts a strain on home values.