A fiscal stress test of all fifty states by Moody’s Analytics showed that Connecticut faces significant risks if the country experiences another recession – even a moderate one.

Connecticut was one of the bottom 15 states that were “substantially unprepared” for an economic downturn, which would lower tax revenue and increase state service needs to help those affected by a recession.

Connecticut has yet to recover all the jobs lost during the 2008 recession and remains one of the last states in the nation that have yet to bounce back. Connecticut’s economic growth has remained very slow since 2008, lagging behind most other states.

Donald Klepper-Smith, chief economist and director of research at DataCore Partners LLC, says Connecticut has been on a “recession watch for the last year due to tepid employment growth, increased residential outmigration, and the departure of several Fortune 500 companies, which has undermined business confidence.”

“Recession over the next 12-18 months isn’t a forgone conclusion, but the risks are real and tangible,” Klepper-Smith said.

Connecticut currently has only 1.3 percent of its budget – $235 million – in its rainy day fund. The fund has been depleted over the years to make up for budget deficits.

But Moody’s says it is not just the lack of budget reserves that could leave Connecticut in a precarious position, but a lack of spending flexibility due to fixed costs.

“As Medicaid, pensions, and other mandatory items continue to grow as a share of state budgets, less and less is left over for discretionary items in the zero- sum game of state fiscal policy,” the report says. “Therefore, as the share of mandatory items grows in a state budget, the fewer opportunities policymakers have to cut spending.”

Connecticut’s fixed costs – which include pension costs, retiree healthcare, debt service, entitlements and adjudicated claims – make up 53 percent of the state’s budget, according to the Office of Fiscal Analysis, leaving little room for spending flexibility if and when an economic downturn occurs. 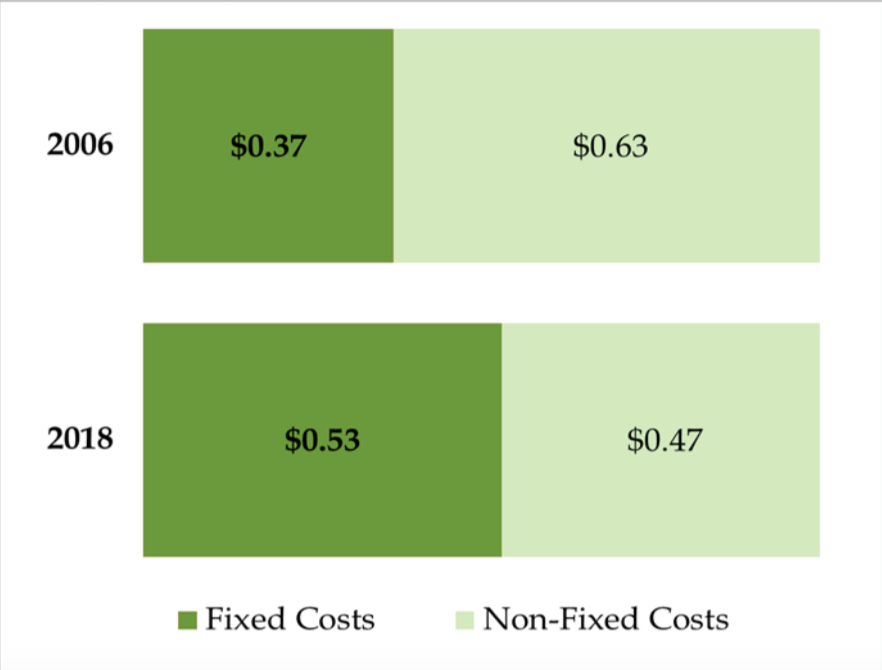 Furthermore, Connecticut’s pension problems would be further exasperated during another recession. Pension funds rely on returns from financial investments in order to meet their obligations. Lower than expected returns – which occur during recessions – lead to larger unfunded liabilities.

Since the 2008 recession, Connecticut has raised taxes three times, but the state has continued to run multi-billion dollar deficits and has seen slow economic growth.

The combination of a slow economy, high percentage of fixed costs, and very low budget reserves leaves Connecticut in a difficult spot should another economic recession occur.

According to the authors of the study, such conditions can lead to lawmakers making emergency policy decisions that can ultimately hurt the state more than help it.

“Unpreparedness can lead to disruptive decisions to drastically cut spending or raise revenues just at the time the economy can least afford it.”

Given Connecticut’s current fiscal situation, the possibility, however remote, of a recession could mean trouble for the state.

“All recessions are unique in terms of the factors which tip the scales to the downside,” said Klepper-Smith. “Last time around it was deterioration in the financial sector due to overleveraged consumers and businesses. Who knows what will precipitate the next one?”

By Marc E. Fitch February 24 , 2021 Economy One Comment
A bill granting up to 30 years of property and sales tax exemptions for data centers in Connecticut passed in…
Read More