As Connecticut faces a continuing budget crisis, a new study has found Connecticut has the third highest taxpayer burden in the nation due to its unfunded pension liabilities. Connecticut’s high debt burden earned it the classification as a “sinkhole state.”

Truth in Accounting, a think tank which analyzes government financial reporting, measures the amount taxpayers would have to pay in order to make the state debt free.

According to the study entitled The Financial State of the States, Connecticut’s unfunded pension liabilities, retiree healthcare benefits, and “accounting gimmicks” has left the state $63.6 billion in debt.

That translates to $49,500 in state debt per Connecticut resident.

Shiela Wienberg, founder and CEO of Truth in Accounting, says Connecticut residents should be “shouting about this from the rooftops.”

Connecticut’s unfunded pension liabilities were the primary cause of Connecticut high debt burden. Truth in Accounting estimates the pension debt to be $27.7 billion with an additional $21.7 billion in unfunded retiree health benefits.

The think tank also says that Connecticut is under-reporting its burden by $11.9 billion.

“These unfunded benefits are promises the state has made to public servants like teachers and police officers, but because the state uses accounting gimmicks when calculating its finances, they don’t report the accurate figures,” the report said.

Connecticut’s unfunded pension liabilities and retiree healthcare costs represent two of the fastest growing fixed costs to the state, crowding out funding for other state services. 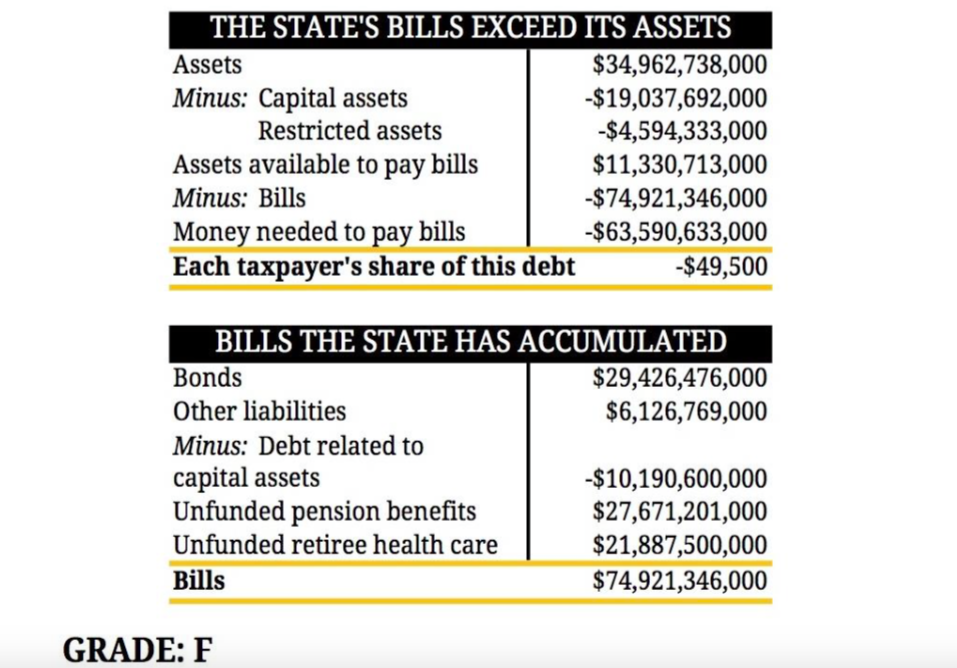 Despite calls for reforming the way Connecticut handles its state employee retirement benefits, a union concessions deal negotiated between Gov. Dannel Malloy and union leaders extended the state employee benefits contract to 2027, delaying any reforms for another ten years.

Connecticut is one of only four states which sets its retirement benefits through collective bargaining rather than in state statute.

Union leaders spoke out against the budget and Malloy claimed the changes would invite legal challenges by the unions. Malloy said he will veto the budget.

Connecticut remains one of only two states in the nation without a budget and if lawmakers are unable to reach an agreement with the governor before October 1, Connecticut residents’ tax burden may grow.

Malloy has been running the state through executive order. Due to the rising fixed costs of pension liabilities and debt service, the governor has less money to distribute to municipalities in the form of education funding.

If a budget is not reached by Oct. 1, 85 towns across Connecticut will lose all of their state education funding and another 54 will see significant cuts, which will potentially drive up property taxes and lead to teacher layoffs.

A budget proposal from Democratic leaders relied on $1.5 billion in new and increased taxes in order to close the budget deficit. Malloy says he hopes to meet with leaders from both parties to work out a compromise.

Connecticut has the third worst taxpayer burden in the nation, according to Truth in Accounting. Connecticut ranked behind New Jersey and Illinois.

Top 7 Things Yankee Institute Remembers About 1991: Countdown to the 30-year anniversary of the state income tax

By Yankee Staff March 2 , 2021 Taxes
It was the year the USSR dissolved – George H.W. Bush was President, and our Governor was Lowell P. Weicker…
Read More