Noticeably absent from the latest budget by House Democrats are 11 of the 12 reforms Democratic senators requested as a condition of their approval of the union concessions deal passed on July 31st.

Senators Gayle Slossberg, D-Milford, Joan Hartley, D-Waterbury, and Paul Doyle, D-Wethersfield, had earlier signaled they might not support the $1.5 billion union concession package, but then voted to approve the deal in the Senate. If any one of those senators voted against the concessions package it would have been rejected. The concessions package passed the evenly divided Senate with a tie-breaking vote by Lt. Gov. Nancy Wyman.

In exchange for their votes, the Senators composed a list of 12 cost-saving reforms, which included requiring a vote on every union contract, reforming arbitration laws and ending overtime in pension payment calculations after the expiration of the SEBAC agreement in 2027.

However, immediately after the vote, Senate President Martin Looney, D-New Haven, stated that “no promises were made.” 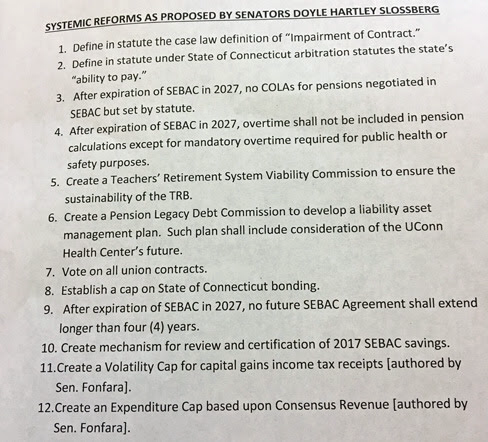 Although some of the changes would not be possible until 2027 when the union benefits contract expires, several other reforms could be implemented immediately, such as requiring a legislative vote on collective bargaining agreements, and changing binding arbitration laws.

Republicans have indicated they would support many of the reforms.

Similar legislation proposed during the 2017 session was met with significant resistance from union leaders and ultimately did not pass out of committee.

The only one of their suggestions included in the latest House Democratic budget proposal is a cap on state bonding, but there is no mention of any of the proposed labor reforms.

But getting labor reforms included in a budget by House Democrats could prove difficult. House Speaker Joe Aresimowicz, D-Berlin, is an employee of the powerful government union AFSCME, whose members would be affected by any reforms made to the way Connecticut negotiates with its labor unions.

In exchange, union members accepted a three-year wage freeze and increased contributions toward their pensions and healthcare.

The raises and layoff protections could put Connecticut in a difficult spot during the next budget-making session in 2019 as lawmakers will have to balance the raises with rising costs and potentially lower tax revenue.

Fixed costs such as debt service, and payments for pensions and retiree healthcare are rising faster than tax revenue. In an interview with U.S. News and World Report, Benjamin Barnes, secretary of the Office of Policy and Management, said Connecticut’s fiscal problems are almost due entirely to unfunded pension liabilities.

“The increases that we’ve made in payments for retiree health and unfunded pension liability since 2010 are equivalent to all the taxes we’ve raised and then some,” said Barnes.

Connecticut’s unfunded pension liability is reportedly $34.8 billion, but many estimate that it is much higher when factoring in lower discount rates.

Connecticut has also not met tax revenue projections, even after the two major tax increases in 2011 and 2015. Lower-than-projected income tax revenue in 2017 caused the budget deficit to jump from $3.5 billion to $5.1 billion.

Months after the June deadline, Connecticut remains without a budget, while lawmakers are proposing another round of tax increases. House and Senate Democratic leaders have refused to bring Republican budget proposals, which do not include major tax increases, up for a vote.

Instead, Gov. Dannel Malloy has been running the state through executive order, but the rapidly rising fixed costs are once again causing problems.

The governor is limited to 2017 spending levels but the rise in the cost of pensions, healthcare and debt service means there is less money for education, municipal aid and social services.

In response, Malloy issued an executive order zeroing out education funding for 85 towns across Connecticut and severely slashing funds for another 54.

The cuts threaten to raise property taxes and towns have already begun to layoff teachers and other municipal employees who are not protected under the state employee concessions deal.