A study of Connecticut’s population loss conducted by the Office of Policy and Management shows that Connecticut is experiencing a “slight loss” of individuals earning more than $5 million per year.

The loss of high earners could be especially problematic for a state that relies heavily on its highest income tax bracket for state revenue.

The study released in May says that “by far, the largest driver of Connecticut’s declining population is an increase in the number of people leaving Connecticut for other states.” The remaining factors for the three year decline in population are low birth rates coupled with a higher death rate.

“IRS data show that regardless of the various ebbs and flows documented by DRS data, Connecticut lags behind its neighbors in overall growth of high-income filers,” the report says.

The report showing the loss of high-income earners comes after Connecticut experienced an unexpected drop in income tax revenue, which caused budget deficit to jump sharply from $3.6 billion to $5.1 billion. The majority of the revenue decline was due to lower-than-expected returns from the highest income tax bracket.

Connecticut was not the only New England state to see a decrease in population as more and more people head south and west. However, Connecticut experienced a more significant loss than others.

According to the report, Connecticut tends to gain people from states like New York and New Jersey, but lose them to states like Florida and Massachusetts, although the biggest losses went to states marked as “other.” 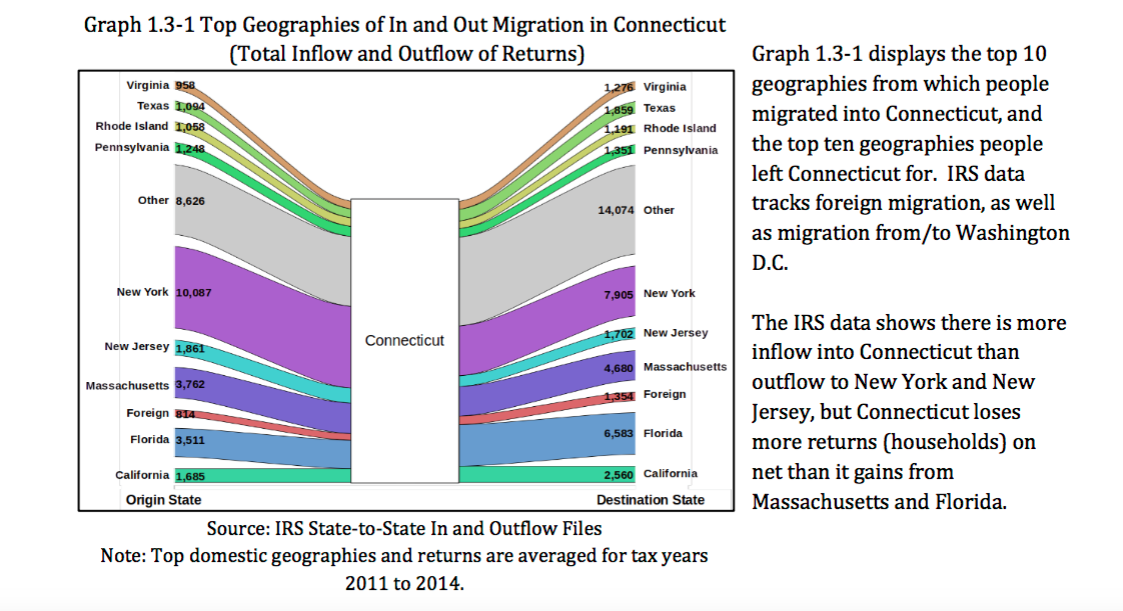 The turning point, according to the study, appears to be the 2008 recession, although Connecticut’s population growth began to slow in 2010. Since 2013 the state has consistently seen its population decline.

The recession hit Connecticut especially hard and the state has been slow to recover. To date, Connecticut has only recovered 82 percent of the jobs lost during the recession, while states like Massachusetts have gained back 293 percent.

The number of births in Connecticut also dropped off quickly following the recession.

The report states that while the rest of the Northeast has returned to normal out-migration rates since the recession, Connecticut’s out-migration trend has doubled.

Income growth in Connecticut has also remained flat, trailing behind the rest of the country, according to Pew Charitable Trusts.

Connecticut also had the slowest increase in the number of tax returns filed when compared to New York, New Jersey, Rhode Island, and Massachusetts.

The authors of the study say they cannot speculate as to what is driving the increase in out-migration but do point to the Census Population Survey that showed 48 percent of people moved to a different state due to housing, while 30 percent moved for family reasons and 20 percent moved for employment.