Gov. Dannel Malloy’s executive order, which zeroes out education funding for 85 school districts in Connecticut, could result in massive property tax increases – even to towns that are already struggling – if the state legislature cannot reach a budget deal by October 1.

The property tax increases needed to deal with the cuts could mean up to a 40 percent increase to the mill rate for some municipalities, equalling 2.5 percent of the average household income in those towns, according to data compiled by the Western Connecticut Council of Governments.

On average, municipalities could see a 12 percent increase in property tax mill rates if the cuts go into effect.

But the cuts appear to disproportionately hit distressed municipalities in favor of the school districts that are part of the Alliance District of 30 low performing schools, some of which are not considered distressed. 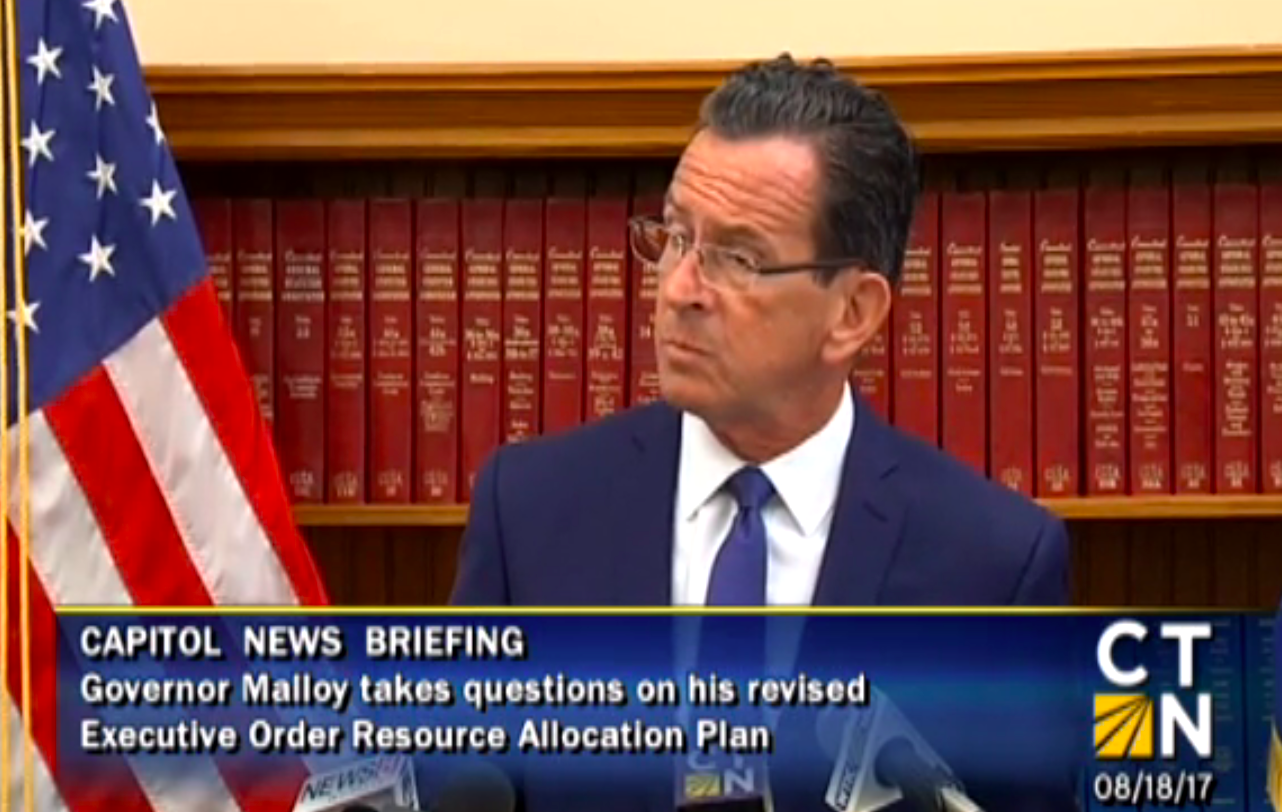 Analysis of the data shows that, on average, distressed municipalities would see a 63 percent cut in education funding, while municipalities which are part of the Alliance, but not considered distressed by the state, would only see a 16 percent reduction.

Those cuts to towns that are already struggling could have a devastating affect on both schools and residents’ property tax rates.

Due to the budget impasse, the governor has to run the state by executive order and is limited by last year’s spending restrictions. Because fixed costs such as state employee retirement benefits and debt service have increased, there is less available money for municipal aid.

The towns that would see massive education cuts include distressed municipalities such as Plymouth and Torrington, which normally receive more state aid. The executive order also eliminated payment-in-lieu-of-taxes for colleges, hospitals and state owned property

Plymouth would see a cut of more than $10 million in education funding under the governor’s executive order. To make up for the loss, Plymouth would have to raise its mill rate by 13.5 mills, resulting in an average property tax increase of $1,961 per household.

Torrington, which had to push back the start of its school year, would receive a $22 million cut, which would translate to $1,350 per taxable home on the city’s grand list. Torrington is also considered a distressed municipality.

This could also mean big reductions in the education expenditures for these towns. According to data from the Connecticut School Finance Project, the cuts would mean a 39 percent decrease in eduction spending for Plymouth’s school district and a 21 percent reduction in Torrington.

This could result in teacher layoffs, program cuts and changes to school curriculum if a budget agreement is not reached.

Far from being wealthy enclaves like Darien or Avon, towns like Plymouth and Torrington have residents with average household incomes of $67,000 to $78,000 per year. Property tax increases to deal with the proposed cuts in Plymouth could equal up to 2.5 percent of the average household’s yearly income.

The calculations do not take into account possible budget reserves that a town may have to deal with the increases or special tax districts. But for towns like Plymouth and Torrington, which are already considered distressed, there may be little recourse other than raising property tax rates.

Malloy said throughout the legislative session that he was against another tax increase to solve the $5.1 billion deficit. But he also proposed saddling towns with part of teacher pension costs as part of his budget, which would have raised property tax rates.

Malloy also negotiated a concessions with the state employee unions to reach an estimated $1.5 billion in savings.

The deal narrowly passed a vote in the House and required a tie-breaking vote by Lt. Gov. Nancy Wyman in the Senate. The concession package guarantees state employee pay raises and layoff protections and extends the benefits contract to 2027.

Republican leaders in both the House and Senate crafted their own budgets which relied more heavily on labor and benefit reforms, but would not have included tax increases or measures which would have indirectly caused higher property taxes.

Although the concessions deal was considered the cornerstone of both the governor’s and House Democrats’ budget plans, Speaker of the House Joe Aresimowicz, D-Berlin, has said the House will not meet until the week of September 11 to work on the budget.

House Democrats released a revised budget which raises the sales tax to 6.85 percent and includes a $122 million cut to municipal. However, the budget proposal remains $1 billion short of closing the deficit.

An increase in property taxes and the sales tax could further exasperate some of Connecticut’s woes, including the ongoing loss of residents to other states. Connecticut was ranked 48th in the nation for states with the highest real estate taxes by WalletHub and has the 6th highest cost of living, according to CNBC.

This article was updated to include House Democrats latest budget proposal.

By Ken Girardin August 2 , 2021 Regulation, Taxes, Transportation
Proponents for the Transportation and Climate Initiative (TCI) plan to use a special legislative session in September to implement the
Read More

By Marc E. Fitch July 8 , 2021 Taxes One Comment
Connecticut’s economic troubles since the 2008 recession are well known. The state has experienced some of the lowest job growth
Read More