Everyone knows that living in Connecticut is expensive, but how far will $100 get you in the Nutmeg State?

A state-by-state study conducted by the Tax Foundation purports to answer that very question. Using the 2014 price index from the U.S. Bureau of Economic Analysis, the Tax Foundation found that in Connecticut $100 only translates to $91.91 in actual purchasing power.

Connecticut was far from alone – especially in the Northeast – when it came to getting less bang for your buck. New York and New Jersey saw less value on the dollar than Connecticut. For New York, $100 only equaled $86.43 in goods.

However, Connecticut’s other next-door neighbor, Rhode Island, faired well with $100 equaling $101.32 worth of goods. 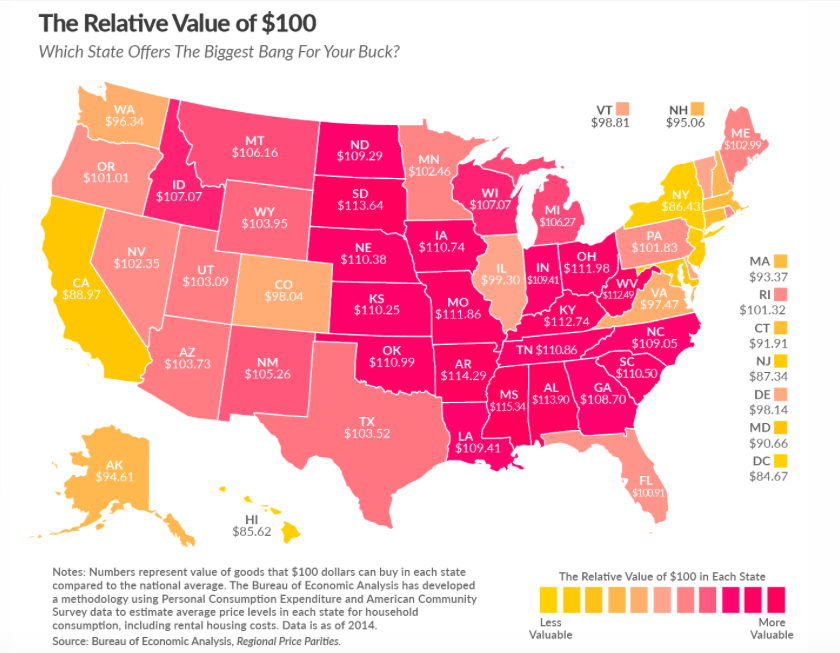 It also notes that employers often pay their employees more because of the decreased purchasing power in a given state, but this is not always the case. The study notes that North Dakota, for instance, has high incomes coupled with low prices.

The South and Midwest had the most purchasing power per $100. In states such as South Carolina, $100 equaled $110.50 in spending power.

The lower cost of living and higher purchasing power of southern and midwestern states may help explain the loss of some Connecticut residents to those locales, particularly young starting their careers and retired people living on a fixed income.

According to a study published by the Connecticut Commission on Economic Competitiveness, the retired and young are the two biggest groups of people moving out of state.

A comparison between data provided by U.S. Census Bureau and the U.S. Bureau of Economic Analysis showed that states with high income growth also had rising populations. Those states, notably Texas, Utah and Colorado, also have lower consumer prices according to the Tax Foundation.

The authors of the study conclude that this information has “substantial implications” for public policy, because those living in high income, high price states may not feel they are earning enough to adequately support themselves.

“Many policies – like minimum wage, public benefits, and tax brackets – are denominated in dollars. But with different price levels in each state, the amounts aren’t equivalent in purchasing power. This has some unexpected consequences; people in high price-level states like New Jersey will often pay more in federal taxes without feeling particularly rich.

Is Connecticut still the richest state in the nation? Barely

By Marc E. Fitch April 2 , 2021 Economy
Connecticut has for many years been labeled the richest state in the nation because of its highest-in-the-nation per capita income,…
Read More