CHRO touts $10.2 million in settlements for 2016 as discrimination complaints rise

In its administrative report to the governor, the Commission on Human Rights and Opportunities, which is tasked with investigating claims of discrimination in employment and housing, claimed that it had “the best production rate” of any similar agency by securing $10,250,000 in discrimination settlements from employers and property owners during FY16.

Of the 2,793 claims closed in the past year, 1,293 resulted in some form of settlement, either during mediation or in court, according to the figures released by CHRO. This results in an average settlement of $7,927.30.

But some employers and property owners liken the CHRO’s practices to “extortion” and claim they are forced to settle with claimants to avoid a longer and more costly fight.

According to the CHRO page entitled, “It’s in your best interest to settle,” on the commission’s website, a respondent “may be exposed to public scrutiny and financial liability, even if you have done nothing illegal.” 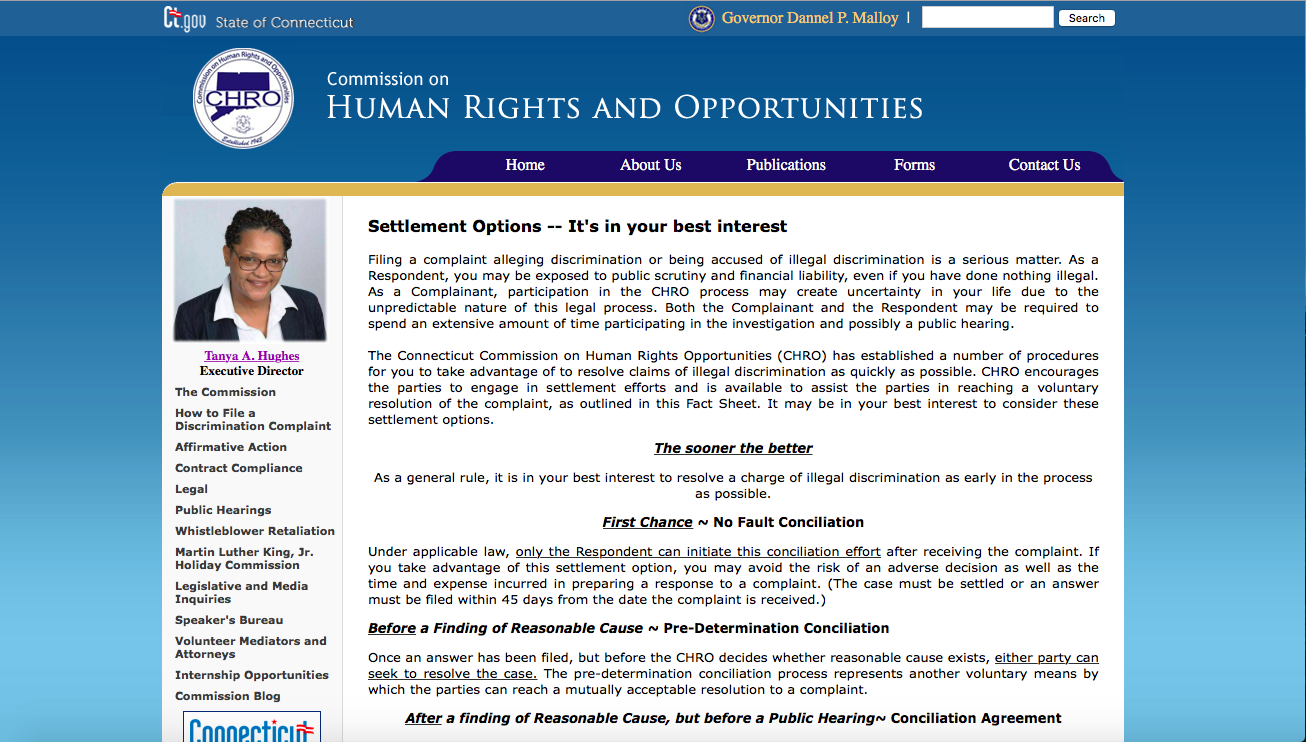 The commission came under fire for touting their settlement numbers earlier in the year during a public hearing before the Legislative Program Review and Investigations Committee.

Rep. Christine Pavalock, R-Bristol, questioned CHRO Executive Director Tanya A. Hughes and Deputy Director Cheryl Sharp, as to whether it is appropriate for the commission to tout the amount of award settlement money as a measure of success because it is acting as a “quasi-judicial agency.”

The review and investigations committee recommended eliminating the use of settlement funds as a metric for measuring the CHRO’s success in their findings report issued on December 7. The CHRO agreed with the recommendation.

Attorney Daniel Schwartz who writes the Connecticut Employment Law Blog, speculated that the increase could be “because it’s easier than ever to pass the Case Assessment Review stage and try to get something at a mediation.”

The case assessment review occurs at the initiation of a complaint. The commission decides whether or not a case is able to move forward to mandatory mediation. During mandatory mediations a mediator is assigned to the case and tries to a settlement agreement between the two parties to avoid moving on to the investigative stage.

Eric Gjede of the Connecticut Business Industry Association agreed that the number and amount of settlements mitigated by the commission is a poor benchmark for measurement. “I think ending this practice would be in the best interest of everyone, as a better measurement would be in the number of just outcomes they were able to achieve within their statutorily imposed timeframes.”

But Gjede said he was glad see that CHRO is trying to make changes “to make the process more efficient and fair to both claimants and respondents.”

The commission also reported that only 1.22 percent of its cases were on-going for more than two years. The report credited technology upgrades for “enhancing productivity and response time to our
customer base.”