This time of year, children are told that Santa Claus is making a list and checking it twice to find out who has been naughty or nice. However, Santa isn’t the only one who makes a list every year. Leading experts and organizations across the country also rank states by their public policy. In this ongoing series, we will see which “naughty” lists Connecticut landed on and make small suggestions to help the state be a little “nicer.” Check back every day from now until Christmas for a new entry!

By now, it has been established that Connecticut has made naughty lists on a broad scope of issues, including education reform, energy policy, business friendliness, and fiscal responsibility. While it’s easy to see there is a problem from the 10,000 foot perspective, finding the roots underground can be more challenging.

Among the troubled roots is Connecticut’s inability to sufficiently reduce spending, which has hurt the state’s fiscal health. In the most recent fiscal health analysis put out by some of the nation’s most reliable economic researchers, Connecticut shows vast room for improvement.

In the Pew Charitable Trust’s research titled Fiscal 50: State Trends and Analysis, Connecticut did not fare well compared to its neighbors. Of particular note is the state’s depleted reserves; Connecticut’s reserves would allow the state to operate for a projected 8.3 days. This falls well below the nation’s median (29.2) and neighboring Rhode Island (27.6). This does not reflect a revenue problem as much as a spending problem. 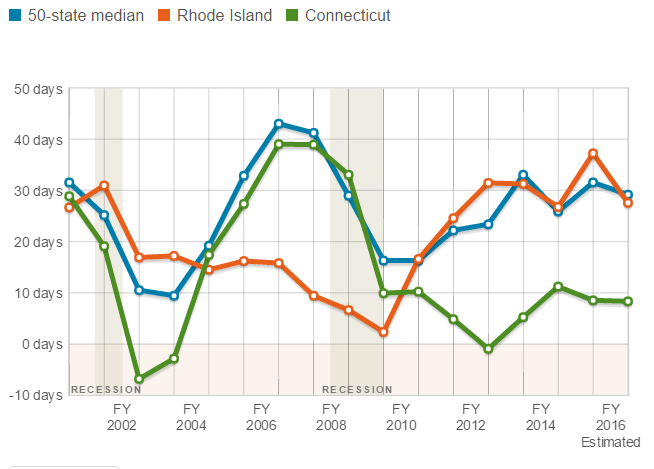 The rates of growth in revenue between Connecticut and Rhode Island have roughly paralleled each other in the past few years. However, between 1993 and 2011, Rhode Island’s rate of change in spending against personal income has declined at a much greater pace than Connecticut’s. Further, the levels of debt each state carries are significantly different.

Debt and Unfunded Retirement Costs as a Share of State Personal Income, 2013 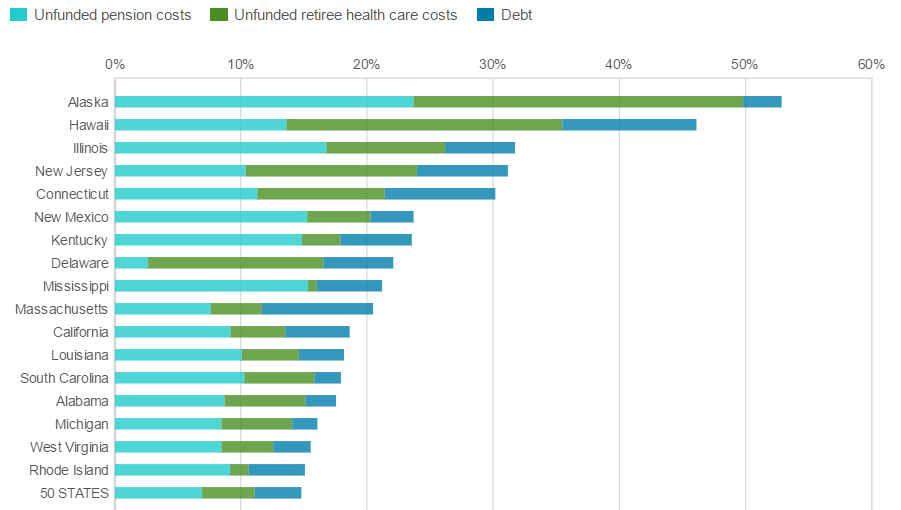 Unfortunately in Connecticut the answer has too often been tax increases, making the state uncompetitive and a difficult place to do business. By chasing revenue to meet deficits and address debt, the state has chased potential revenue away, both in the form of slow economic growth and domestic out-migration.

The Mercatus Center at George Mason University recently issued a  report, Ranking the States by Fiscal Condition 2016 Edition. It reflects much of the same issues as Pew Charitable Trust’s research. The economists at Mercatus found Connecticut to be the least healthy state in the nation. Of the five factors weighed, Connecticut’s best ranking was 27 for service-level solvency, which measures whether spending is low or high relative to the tax base. No doubt the state’s high median income provided some relief on this metric.

On the rest of the measures, Connecticut fared poorly for cash solvency (49), budget solvency (50), long-run solvency (47), and trust fund solvency like pensions, retirement benefits and overall debt relative to income. (39).

In Washington, D.C.’s ever-shrinking circle of individuals who care about spending sobriety there is a popular metaphor:

Most people in their personal lives understand that when you’re spending more than you’re taking in, the solution is not to go to your boss and ask for a massive raise, it’s to seriously rethink what you’re spending your money on.

This concept lends itself to reforming the culture and budgeting procedures for Connecticut. Officials and residents alike must understand that the state cannot regularly spend more than it takes in (a strong spending cap would help). Additionally, the appropriations process in the state, in which outlays are determined before a firm grasp on revenue exists, must be re-examined and possibly reversed. If Connecticut wants to get off the fiscal health naughty list, it should understand what good fiscal policy looks like, and realize that “spend and let the fiscal guys find out where to get the money” is not a sound spending plan.