The top franchises in Connecticut are almost all in the field of elderly services, according to BizQuest, a business brokerage website that lists franchise opportunities for potential business owners. BizQuest’s June 10 newsletter the “Top 5 Franchises in Connecticut” listed four businesses that deal directly with care for seniors and the elderly. Comforcare Senior Services, Always Best Care, Brightstar Care and IKOR International offer a range of senior services from in-home care to consultation services for families with aging loved ones.

The growth of these businesses in the state reflects an aging population. The Connecticut Commission on Aging released a report in 2015 entitled which outlined the demographics of the state’s population. According to the report, Connecticut’s population of people over 65 will grow by 57 percent by 2040, while the population of those under 65 will only grow 2 percent.

The report states that “nearly every facet of our society will be impacted.” 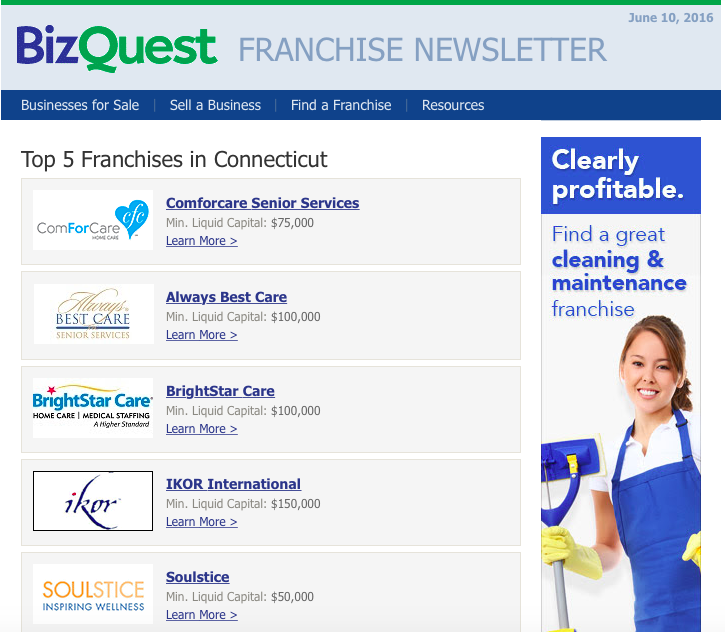 Connecticut’s aging population could mean economic difficulties in the future for the state. More services will be required to help families manage the needs of elderly loved ones, putting a strain on state and nonprofit agencies.

The Commission on Aging’s report states that the aging population “will challenge our state’s creativity, policies and budgets as they increasingly outlive their financial resources despite working longer.”

Compounding the effects of the aging population is the fact that older people are living longer and young people ages 18 to 24 are fleeing the state. Young people comprise the largest segment of Connecticut residents leaving the state, according to the Connecticut Economic Competitiveness Diagnostic.

Brendan Miller of BizQuest says that the rankings are generated through their online marketing platform and are based “on what franchises are being looked at, which are creating leads and which are getting the most interest.”

Although major franchises such as McDonalds are not factored into their report because they maintain their own franchising platforms, BizQuest’s figures reflect more regional and state-specific business interests.

According to BizQuest’s numbers, more and more business-minded people are turning to senior and elderly care as a way to capitalize on the state’s changing demographics.