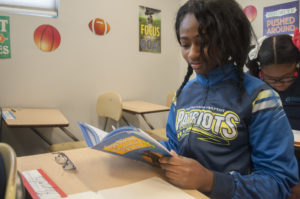 Kellie Barton speaks with a hint of her native Jamaican accent while holding her seven-month-old son, who is actively trying to pull Kleenex from a tissue box. Barton works as a secretary for Setting Captives Free Ministries, a small church located on the second floor of a two-story retail building on Kings Highway in Fairfield. She lives in Bridgeport and has limited income but her older son, Sheldon, age 9, is able to attend a private school thanks to Children’s Education Opportunity Foundation of Connecticut. “It’s been awesome,” she says. “Right now I’ve been able to send my son to a private school. That wouldn’t have been possible without CEO’s help.”

Begun in 1995, CEO now helps 400 children per year. “CEO has tapped into something here because when you give parents a choice, they jump on it,” said Carolanne Marquis, director of CEO.

While called a “scholarship” the funds are not awarded based on grades or ability. Instead awards are given on a first-come, first-served basis.

CEO of Connecticut is just one of many similar organizations throughout the United States that have made school choice and opportunity for inner city children their mission. Funded only through private donation, foundations like CEO are an example of people coming together to find a solution to a problem that has long plagued state and federal government.

Many of these private schools are religious by choice of the parents. Parochial schools tend to be less costly for tuition and also, as in Barton’s case, they provide something that public schools cannot. “I have the option to send him to a Christian school that has my Christian values,” Barton said. “So its a combination of a good quality education for my son while having him in a place where he’s building character and that’s what I think is most important.”

CEO founder Lewis M. Andrews says that CEO does not dictate where parents can send their children. “If a parent is going to make the effort to come up with the money to match a scholarship to send their kid to school, if the kid’s education is that much of a priority – and its hard for a poor parent to come up with that kind of money – they’re not going to blow it. And they don’t. When you look at what the parents choose, they choose a good private parochial school.”

CEO has grown over the years and so has its scholarship. At its beginning in 1995 the foundation was only able to offer $1,000 per year per student. That scholarship has now grown to $2,100 due to the generosity of its donors. However, the foundation can only sustain a student until high school. After that, tuition becomes too expensive for either the foundation or the parents to continue. The student must either return to a public school or seek out other forms of financial aid. 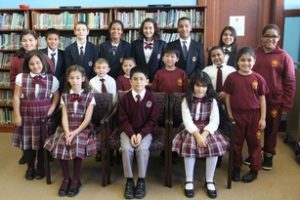 “We’re starting to look to create a network that parents might understand where they could turn for financial help,” Marquis said. She says some of the principals in the religious schools accompany the children and their parents to private high school interviews to help advocate for the student and discuss financial aid options.

Public schools in Bridgeport, New Haven and Hartford face a variety of challenges. Safety concerns, budget deficits, low student performance and in-fighting among school board members have parents looking for alternative ways to get their children a good education.

Of the 32 elementary and middle schools in Bridgeport, 22 received a “D” rating or lower by Connecticut Coalition for Achievement Now, a state education research and advocacy group. Connecticut also has the highest educational achievement gap in the country between its low income students and students in wealthier districts.

“Ever since I was a kid the urban public schools have been seen as a problem,” Andrews said. He contends that the explanation of why those schools fail has changed over the years. “It began with the argument, ‘We’re professionals, leave us alone and we’ll solve the problem.’ And for the first twenty-five years you had all these gimmicks – Whole Language and all these techniques that never really worked but in implementing them, they never really had to go into structural reform. They were able to keep on with the system as it was.”

Andrews says that urban school failure is now blamed on a lack of federal funding for housing and food stamps. “Its sort of like responsibility has shifted from the teachers to society,” he said. “It started off with ‘leave us alone, we’re professionals,’ and now its ‘its not our fault, we had nothing to do with it, society is cruel and punishes people unfairly and if we were more like Europe we wouldn’t have the problem.”

But students in CEO’s program have shown success in their new schools which have smaller class populations and more one-on-one attention. “He’s actually in a class where there is seven or eight kids with him, so he has that one-on-one time with his teacher and is able to get that attention,” Barton says about her son. “His grades are excellent. He is a straight A and B student.”

Carmen Rodriguez, President of Saint Augustine School in Hartford, says that CEO provides opportunities to children that would otherwise not be available. “Many of our children could not think of having this opportunity with our organization without their help. It gives them a stable life and hope for the future to meet their goals.” She says the children are doing “very well” academically but also socially and emotionally. “I have stories to tell,” she said, “of how they’re doing academically and how happy the parents are.”

Religious schools are having a difficult time staying open. Lacking any public funds and having to compete with the ever increasing number of public, charter and magnet schools, parochial schools are quietly fading away. SS Cyril and Methodius in Hartford had to close in 2014 and transferred its students to Saint Augustine. Now Saint Augustine is closing due to the high cost of structural repairs needed. It is merging with St. Brigid school in West Hartford. It was the last Catholic school in Hartford. CEO scholars represent a lifeline for these once vibrant social institutions.

With failing schools unable to meet the needs of its students, Connecticut has been turning to magnet and charter schools so that parents can have a choice in where and how their children are educated.

The budget cuts may also force the closure of schools in the same areas that CEO operates. In an effort to find $15 million in savings due to state funding decreases, the city of Bridgeport is closing two of its smaller schools – Edison and Hall – prompting outcry from parents.

For now, Kellie Barton and her son Sheldon are able to avoid the fray and instability in the Bridgeport school system but she is still keeping an eye to the future when Sheldon will move on to high school. She hopes to be able to keep him in the private school system. “I know that there are other programs out there that would pick up where CEO left off. I’m currently seeking and looking for grants like CEO to lend a helping hand.”

CEO filled all of its scholarships this year and had to create a waiting list. Marquis hopes for more funding so that they can get those children into the program. “I supposed its a good problem to have,” she says. “But we’re urgently looking for dollars to help the children we so far cannot fund this year.”