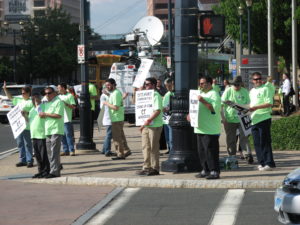 Union members voiced their displeasure with the recently passed budget by protesting outside the annual Democratic Party fundraiser Thursday at the Connecticut convention center. Donning neon green “Union Power” shirts and holding signs that read “Jobs Not Layoffs,” 60 to 70 protesters stood at street corners as passers-by honked horns. Union leaders including Lori Pelletier, president of the AFL-CIO, attended the protest.

“Hopefully the governor won’t do any more layoffs,” one member said. “Stop building so much stuff,” he added. “They’re spending money. They’re renovating things. They have to stop spending money that way – foolishly.”

In the face of mounting deficits after years of unsustainable policy, Democratic Party leaders appear to have made a shift, albeit one that has turned their most ardent supporters into some of their harshest critics.

In the past, the Democratic Party in Connecticut has enjoyed support from unions which have been very influential in state elections and throughout the legislative process. For example, the unions supported Malloy in both his gubernatorial elections and Rep. Joe Aresimowicz, the current majority leader and likely the next speaker of the House, works for the American Federation of State, County and Municipal Employees.

However, this year, following the two largest tax hikes in state history, the state was looking at massive deficits. Malloy began to warn about a “new economic reality” and pushed a tight budget forcing layoffs. 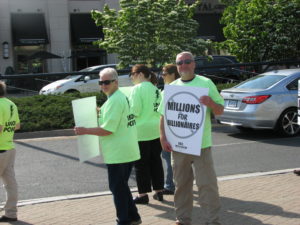 Despite the new budget and the layoffs, the state will see big deficits again soon and the once-friendly state unions are now lashing out at the people they supported and helped elect.

“We’re upset about the way this budget was passed, which was a pretty austere budget and we don’t believe that it has anything to do with core Democratic beliefs,” said Jim Vigue, political director for the Connecticut Employees Union Independent.

“This is going to lay off up to 2,500 families – lets be realistic about this – and the domino effect that it will have on the communities.”

The protesters had ample criticism for the recent decision to loan money to hedge fund management company, Bridgewater Associates, a deal that was chastised by Republican leaders in both the House and Senate. When asked what he thought about Malloy’s argument that there is just no more money, Vigue shot back “they seem to have plenty of money for billionaires don’t they? The largest hedge fund in the country and they get $22 million but there’s no money for services and no money for workers.”

Despite state government studies that show the wealthiest people are leaving the state, protesters believed the government was being short-changed by the top earners. According to one protester, “if they would raise the tax one percent on the richest people in the state we wouldn’t have these budget problems. It’s so unfair.”

Vigue added that if the state would close special tax loopholes used by the wealthy, the state would no longer have on-going deficit problems. “If they’re not going to change the way they tax, they’ll have this problem every other year.”

Malloy signed the budget into law Thursday afternoon before the fundraiser, but union members hope to hold lawmakers’ feet to the political fire. “We hope they listen,” said a member standing at the corner of Wyllys and Front street with a sign that read “Jobs Not Layoffs. “Because we have the power to vote.”