Connecticut is losing better-paying jobs and replacing them with low-paying jobs, according to a study released by the Commission on Economic Competitiveness.

The commission had previously attempted to keep the document secret by discussing it in a closed-door executive session, prompting a Yankee Institute complaint to the Freedom of Information Commission.

The study shows that manufacturing, information technology and construction jobs are shrinking, while low-paying jobs in health care, food and education services have grown. The report, recently made public, is just the latest in studies and national rankings that are piling bad news on the Nutmeg State.

According to the report, Connecticut’s tax burden is hurting its ability to compete with its nearest neighbors. New York and Boston have closed the gaps in quality of life factors and Connecticut’s cities fared particularly badly. Sixty-seven percent of people surveyed in urban areas said they could not find suitable employment. Twenty-seven percent of city residents said their quality of life was getting worse.

The outmigration trends showed considerable losses for people with a college education. The number of people with either no formal education or a high school diploma actually increased, although not enough to make up for the loss of educated residents. Millennials aged 18-24 were the largest age group leaving, followed by retirees.

The study had previously only been seen in executive session because it was only a “draft form,” commission co-chairman William Tong said at the time.

The other committee co-chairman, Joseph McGee, said the draft report hidden from the public “was identical to the one presented in open session.” He said speculation that information had been withheld or taken out of the report was just “conspiracy theory.”

The American Legislative Exchange Council ranked Connecticut’s economic outlook 47th in the nation. The rankings are based on state gross domestic product, domestic migration and non-farm payroll employment, which the study notes, “are highly influenced by state policy.”

The Yankee Institute complaint with the Freedom of Information Commission is still pending. 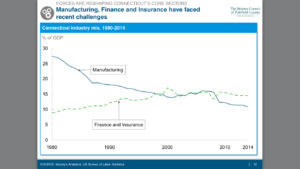 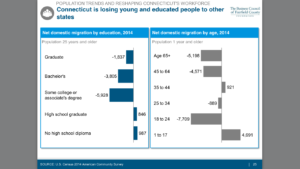 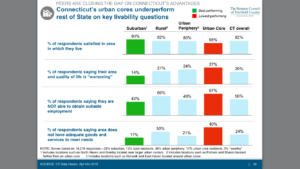 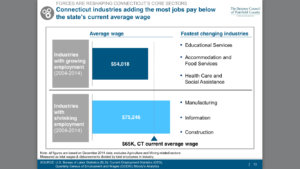