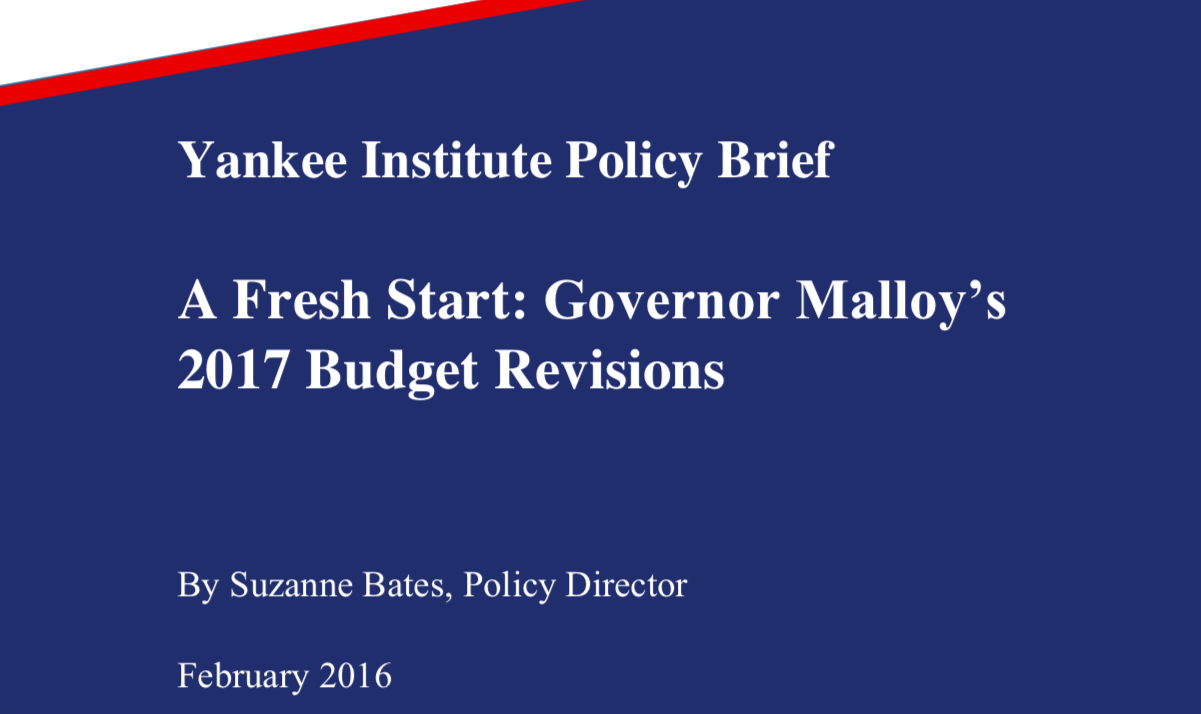 Download the attached .pdf file for footnotes and sources.

Budgets Past and Present

Connecticut used to be the low-tax alternative to states like New York and Massachusetts in the Northeast. But now, especially after the two largest tax increases in the state’s history in just four short years, Connecticut’s taxes are on par or higher than all of its neighbors. Losing that advantage has damaged our competitiveness, and we are now reaping the results of those policy decisions – devastating deficits budget cycle after budget cycle.  The problem the income tax was intended to “fix” has only worsened — and created severe, lasting damage in its wake.

This year, Gov. Malloy is promising something different. In this year’s State of the State address, he laid out five principles that he says will guide how he budgets for the rest of his tenure:

These are sound principles, and the Yankee Institute applauds the governor’s adoption of them — not least because  all were laid out in our 2014 document, “Roadmap to Renewal.”
But the big question is whether Gov. Malloy will stick to these new principles, and not fall back on past practices by raising taxes again. The people of Connecticut are understandably wary, given that this is the same administration that implemented the two largest tax increases in state history – both of which had disastrous consequences for the state.

However, if Gov. Malloy stands strong in defending the principles he has articulated and his budget is adopted as it stands, Connecticut  will face a much brighter future. This budget represents a meaningful change: It represents a decision  to turn to responsible and accountable fiscal management of the state.

Let’s hope that the legislative leadership will also see the necessity of this change of course and will likewise choose to also act in a fiscally responsible manner.

After going through the committee process, the budget must be voted on by the House and Senate. Finally, it ends up back on the governor’s desk for a signature. In addition to the budget, the legislature also votes on an “implementer” bill, which usually does not go through the committee process. The implementer bill is supposed to literally implement the budget – or give permission for all of the spending in the budget. In actuality, the implementer is often stuffed full of many other legislative proposals and includes much more than the details of the budget.

Gov. Malloy’s 2016-17 budget proposal, which he first pitched in February 2015, included $800 million in new taxes and delayed tax cuts. By the time the legislature finished it, the budget called for $1.8 billion in higher taxes. The tax hikes hit private enterprise the hardest, and led prominent business leaders from several corporations – including GE –  to oppose the budget.

The deficit is largely a function of the growth in ‘fixed’ costs – especially for state employee pay and benefits — while tax revenue growth remains almost flat. Some of those major cost drivers include:

To close the 2017 budget deficit, Gov. Malloy has proposed $118 million in specific cuts, and another $361 million through a 5.75 percent across the board reduction in discretionary spending in each agency.[4] The budget also changes the way money is allocated by moving to a block grant system instead of a line-by-line funding of programs. Several lawmakers have already said they oppose this change, as they say it transfers their budgeting authority to agency heads.

In addition to cutting funds, the budget also:

Gov. Malloy’s spending cuts will likely lead to a reduction in the state’s workforce.  But if state employees were willing to pay more for their pension and health care benefits some of those jobs could likely be saved.

In his address, Gov. Malloy said, “It’s time we give them what they asked for. The wisdom of the voters was correct in 1992, and it is correct now. Connecticut needs to enact a spending cap to keep spending in check.”

Although we wish Gov. Malloy would have come to this realization six years ago, we are pleased he is now supporting the implementation of the spending cap and hope he will continue to provide leadership on this issue.

Even with these new austerity measures, the state still faces an uphill climb back to fiscal sustainability. That is because the state carries a significant amount of debt.

According to the Economic Report of the Governor, the state government debt at the end of FY 2013 was $32.4 billion, up from $30.5 billion just two years earlier. That represents a per capita government debt of $8,991, while the 50 state average was $3,590.

The state also has significant pension and retiree healthcare debt. The latest state Comprehensive Annual Financial Report shows the state has $26.3 billion in pension debt and another $22 billion in debt to the retiree health care fund. Connecticut has the third-worst funded state employee pension fund in the nation, and the pension debt crisis (documented by the Yankee Institute in its August 2014 study “Born Broke”) continues to represent a serious stumbling block to the state’s fiscal future.

Beyond 2017, budget deficits continue to loom on the horizon. This will likely mean additional cuts will be necessary to balance the budget in the future.

Much depends on whether Gov. Malloy is serious about his budget principles. They are sound — and, if followed, represent a good start to get the state back on track.

Finally, if fiscal sustainability is truly the governor’s goal, he will listen to his colleagues on the other side of the aisle, and will make lasting changes to the way the state sets its state employee benefits. Those benefits should be set legislatively, and they should be more in line with the benefits that workers in the private sector receive.

For the Malloy administration, this is a time for choosing. The road ahead may not be easy — but the governor has an opportunity: To make the choices that could mark a turning point in Connecticut’s climb back to prosperity.