The Working Class Tax: A Review of ‘Jobs With Justice’ Study 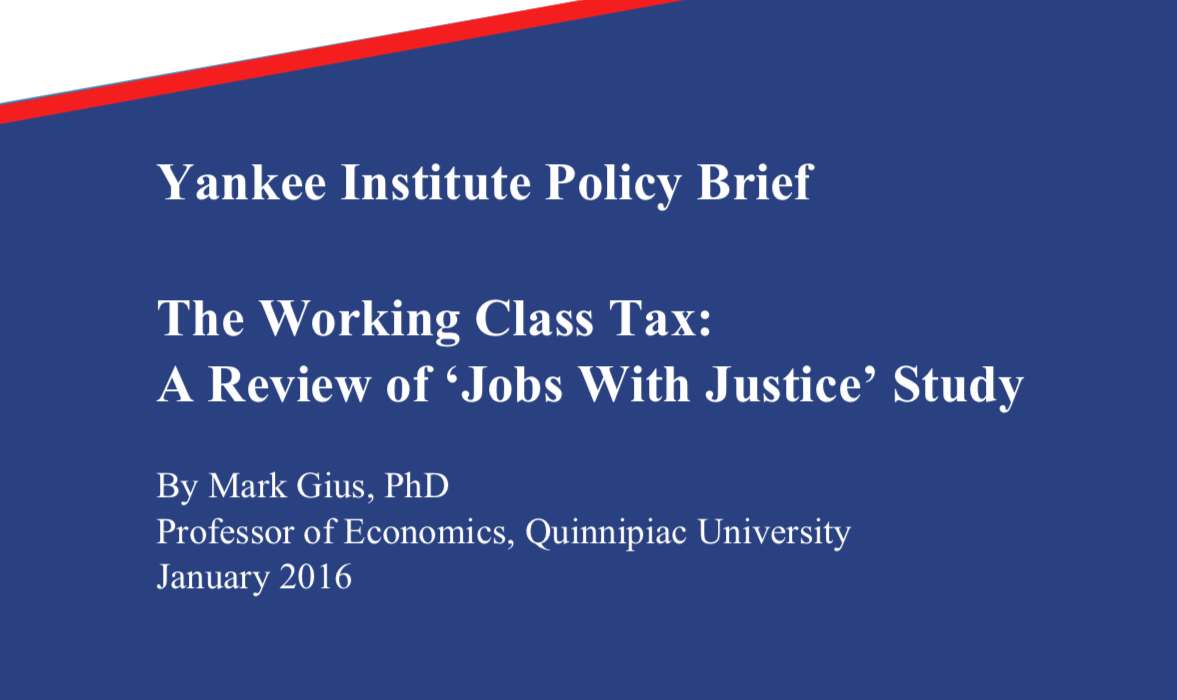 The Working Class Tax: A Review of ‘Jobs With Justice’ Study

For footnotes and sources, please download the .pdf file above.

In this review, Professor Mark Gius, a professor of economics at Quinnipiac University, points a critical eye at a study published by the labor-backed group Jobs With Justice, titled, “The Economic and Fiscal Impact of Connecticut’s Proposed Statute to Recoup Costs Attributable to Low-Wage Employers.”

The Jobs With Justice study shows that if Connecticut taxes the labor of working class men and women, the state will lose private sector jobs. The study’s authors assume that job losses in the private sector would be made up by job gains in the public sector, but given the state’s precarious financial situation, this is unlikely.

Using prevailing economic theory, Prof. Gius predicts that the working class tax would mean fewer jobs and – over time – depressed wages. These negative outcomes would fall heaviest on the young and the poor. The study’s authors also failed to account for the potential affect of the increased cost of goods and services.

Last year a bill was proposed in Connecticut’s state legislature that would have imposed a wage tax on private, for-profit employers who had more than 500 employees. The tax would have been payable quarterly and would have been billable at the rate of $1 for each hour that an employee earned less than $15 per hour. The working-class tax was proposed in response to accusations that many large employers have employees who must obtain public assistance because their hourly wages are so low. This reliance on public assistance creates a financial burden on the state, a burden that some believe is unnecessary and avoidable if employers would only compensate their employees more appropriately.

A study on the economic impact of this proposed legislation was conducted by Daniel Kennedy, Ph.D., Stan McMillen, Ph.D., and Louise Simmons, Ph.D. In their report, the authors present an economic impact analysis that found that this wage tax would increase state employment, state GDP, and net state revenues, regardless of who bears the actual burden of the tax (consumers or firms). The supportive report estimated the positive economic impacts of this tax as follows:

However, some of the authors’ assumptions are not consistent with traditional economic theory, particularly economic theories regarding labor markets and wage determination. For example, the proposed wage tax is similar to a payroll tax. The payroll taxes in use today are ad valorem (percentages) taxes; the proposed tax is a per unit tax of $1 per hour, regardless of the wage. Given that the tax is imposed on the employer, this would cause the demand for labor to fall, thus resulting in a gap between what the employer pays and what the employee receives in compensation. Very little of the tax would be shifted to the employee initially. However, over time, employees affected by this tax would see their wages fall. In addition, there would be a fall in the demand for low-wage workers.

Although these changes may not happen immediately after the passage of the wage tax, over time we should observe a reduction in the employment of low-wage workers and a drop in wages for those earning less than $15 per hour. These changes would probably be most pronounced for those earning between the minimum wage and $15 per hour. For those earning the minimum wage, there would be no decrease in the wage rate. However, given this price constraint, employers may either reduce the number of minimum wage workers that they hire, or they may attempt to reclassify minimum wage workers as independent contractors, thus allowing the employers to reduce their labor costs. Hence, economic theory suggests that a wage tax, in the long run, would result in lower wages for affected workers and a reduction in low-wage employment. In the Kennedy, McMillen, and Simmons (2015) study, very little mention was made of these theories, and there was no discussion as to why their results contradicted the traditional theories of labor economics.

In addition, a plethora of empirical studies have presented evidence that illustrates the negative economic consequences of increasing wages when there are no underlying changes in market demand or labor productivity. For example, a recent study by Jonathan Meer (Texas A&M University) and Jeremy West (MIT) found that increases in the minimum wage reduce job growth over a period of several years. As they note in their paper, these effects are most pronounced for young and low-wage workers.

How Would Business React to the Tax?

Regarding other issues with the Kennedy, McMillen, and Simmons study, the authors present a discussion of possible firm reactions to this proposed tax. As they note in their study, firms may absorb the fee in reduced profits, restructure costs, pass some or all of it on to consumers, switch from labor to capital (automation), reduce benefits, reduce employment, or increase labor productivity. Although all of these are viable reactions to the wage tax, the authors do not incorporate any of these possible scenarios into their model. Instead, the authors focus on other methods by which firms may absorb this increased cost. For example, the authors assume that, if firms did absorb the full effects of the fee, firm revenues would decrease by the full amount of the tax. This assumption is not reasonable given traditional economic theories regarding labor taxes and given anecdotal evidence regarding firm-level reactions to taxes. Although revenue may fall initially due to the increase in tax (because of a potential increase in price and the resulting drop in demand for the firm’s products), this drop will not be constant over time and would be mitigated somewhat as more and more of the tax burden is shouldered by workers.

Other potential issues include the conclusion that, if firms absorb the tax in reduced profits, there would be no “discernible adverse economic effect.” This is also not a reasonable conclusion. If firms’ profits are reduced because of the tax, entrepreneurs would be less likely to start companies in the state (due to lower returns on their investments) and the state’s revenue from corporate and business taxes would fall, due to lower firm profits. Hence, the assumptions made by these authors with regards to the tax’s impact on businesses are erroneous and are not based on traditional economic theories or anecdotal evidence.

Flaws With the IMPLAN Model

In estimating the impact of the tax on the state’s economy, the authors use a model known as IMPLAN. Unfortunately, IMPLAN uses several assumptions that may produce erroneous results. For example, IMPLAN assumes that there are no input substitutions and no price changes. Although these assumptions may be true in the short run, in the long run, one would assume that firms, because of the proposed tax, would substitute capital (machines and automation) for the more expensive labor and that the prices of the goods or services produced by firms affected by this tax would, in all likelihood, increase. The IMPLAN model does not allow for these changes, and hence this model may seriously underestimate the negative effects of this proposed tax on employment and firm revenue.

Where Would the Tax Dollars Really Go?

Finally, the authors assume that state government revenue generated by this tax would be used solely to increase employment in the Department of Social Services, the Department of Developmental Services, and the Office of Early Childhood. This is assumed even though, according to the bill, the revenues from the tax would flow into the General Fund. Hence, the authors’ estimate of the increase in state government employment may be grossly overestimated, especially given that the revenue would go into the General Fund.

Therefore, the following are issues that may invalidate the findings of the Kennedy, McMillen, and Simmons study:

Given all of these issues with this economic impact study, it is questionable whether or not the conclusions drawn from this study are reasonable. In all likelihood, the authors greatly underestimated the negative impact of the tax on low-wage employment and labor markets. It is highly unlikely that this labor tax would increase employment and GDP, especially given that this tax merely redistributes income from low-wage workers and select firm owners to state employees and does not increase the stock of either physical or human capital in the state.