Connecticut Labor Force Got Smaller in 2015 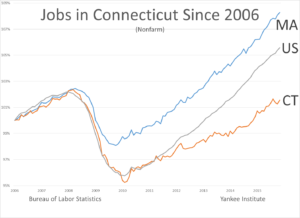 The number of people working or looking for work in Connecticut, known as the labor force, decreased by about 3,000 people in 2015, according to the latest jobs report released Monday by the state Department of Labor.

Reports that Connecticut has recovered all the private-sector jobs lost in the recession leave out missing casino jobs. Since the Mashantucket Pequot and Mohegan Tribes employ casino workers, official statistics classify them as government jobs.

Connecticut’s job recovery closely matched the national rate of recovery from 2010 until 2011, when the state’s jobs numbers flatlined. This was the same year lawmakers voted for the largest tax increase in state history.

When you compare that to Massachusetts, which implemented a small sales tax hike during the recession but combined that with deep, structural spending cuts, you can see the results. While Massachusetts used to be Connecticut’s higher-tax neighbor, Connecticut now out-taxes the Bay State in almost every category – from income taxes, to corporate taxes, to property taxes.

One way the state could combat its slow economic growth is by reforming the estate tax, which would make the state friendlier to wealthier residents.