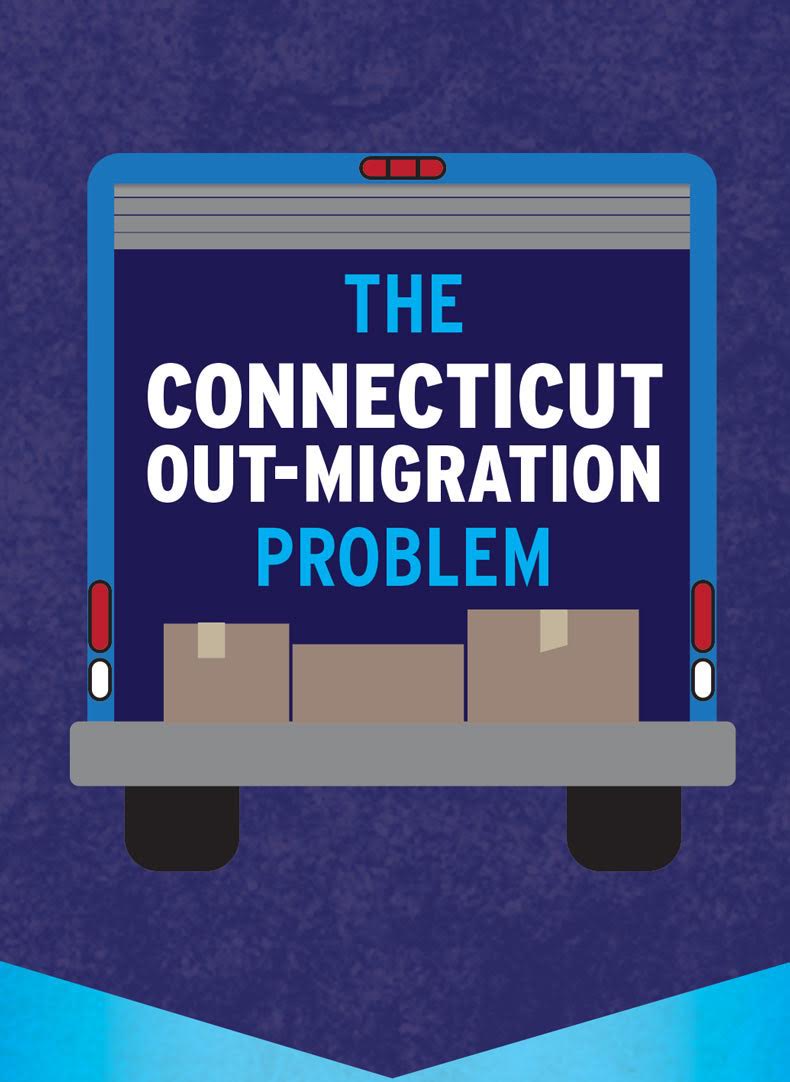 Yankee Institute Policy Brief
$60 a Second: Connecticut’s Outmigration Problem
By Suzanne Bates, Policy Director, Yankee Institute
November 2015
For charts and data, please download the attached pdf.
Introduction
In just two years – from 2011 to 2013 – more than 27,000 people left Connecticut, taking with them $3.8 billion in income. That’s 38 people and $5.2 million leaving the state every day for two years.
If only the numbers could talk, they could tell us the stories behind the statistics.
Stories of moving vans, packing tape, and tearful good-byes; or homes in Connecticut shuttered for six months and a day; or of recent college graduates packing up their cars with all their worldly belongings and heading out state to find their first jobs.
Connecticut has an outmigration problem. More people are moving to other states and other countries than are moving in. This doesn’t mean no one is moving into Connecticut – many people are – but more are moving out. And this isn’t a new problem; in fact it is now decades old. But it has picked up steam.
Between 1993 and 2010, around 12,000 people left the state each year, taking with them about $545 million in income. That means that on average each person took about $45,000 with him or her. Some people, especially retirees, probably left with little or even no income, which brings the average down.
Between 2011 and 2013, however, about 13,500 people left Connecticut each year, taking $1.9 billion in income with them. The average income per person leaving the state climbed to $142,000 – more than three times the previous average.
What happened in 2011 to instigate this massive exodus of people and money? State lawmakers passed an historic $2.5 billion tax increase, which included hikes on personal income taxes, corporate taxes, and estate taxes.
Yes, taxes affect behavior. If moving to another state can save people thousands – and sometimes millions – of dollars in taxes, why wouldn’t they?
Understanding why residents are leaving also helps us take a step toward reversing the outmigration trend. We can’t do much about the weather, but we can make Connecticut a more welcoming place for job growth, and we can make it more affordable by decreasing the cost of state and local government.
The Numbers
The IRS data measures migration by following tax returns and adjusted gross income from one state to another, as well as showing foreign in- and outflows. The number of tax returns represents the number of households leaving the state, while the number of exemptions shows the number of people in those households. The income data represents the adjusted gross income (AGI), and is a good measure of household income.
In just two years Connecticut had a net loss of 27,541 people, and $3.8 billion in adjusted gross (taxable) income. That includes foreign in- and outmigration.
From 2011 to 2012, the state lost 12,088 people and $2.02 billion in taxable income (see Chart 3). From 2012 to 2013, the state lost 15,453 people and $1.8 billion in taxable income (see Chart 4).
The largest net outflow of people and money from 2011 to 2012 went to Florida (see Chart 1). Connecticut lost 4,560 people and $1.362 billion in income to Florida in 2012. This is an average of $285,000 per person, or $587,000 per household.
From 2012 to 2013, Florida again was the most popular destination for people moving out of Connecticut (see Chart 2). Connecticut lost 5,686 people and $1.097 billion in income to Florida in 2013. This is an average of $193,000 per person, or $400,000 per household.
Why Florida? It is, of course, much warmer than Connecticut. But it also has a much lower overall tax burden. With no state income tax, no state-levied estate taxes, and much lower property taxes on average than Connecticut, many of our former state residents have decided that living there for six-months and a day, or longer, in order to save thousands – if not millions – of dollars is well worth the cost of commuting.
Keeping Them Here
So, how can we reverse this trend?
First, Connecticut should immediately repeal its estate tax. This tax brought in only $168 million in 2014, which is less than 1 percent of state revenue. The state likely loses much more than that in yearly income taxes because people move to avoid the estate tax.
In addition, Connecticut must work to restore income tax rates to pre-2011 levels. Obviously, this will first require the state to substantially rein in spending, or else experience economic growth at a rate it has not seen in many years.
The outmigration of state residents is only exacerbating the state’s already troubling economic trends. In the Economic Report of the Governor released this year, population projections showed an expected 10 percent decline of children aged 0-19 by 2025. Meanwhile, the population of people aged 65 and older is expected to increase by 54 percent. This will put increasing pressure on the shrinking number of workforce-aged residents.
It is clear that the state must build a tax and regulatory system that favors growth. If not, the state’s population – and tax base – will only continue to erode.