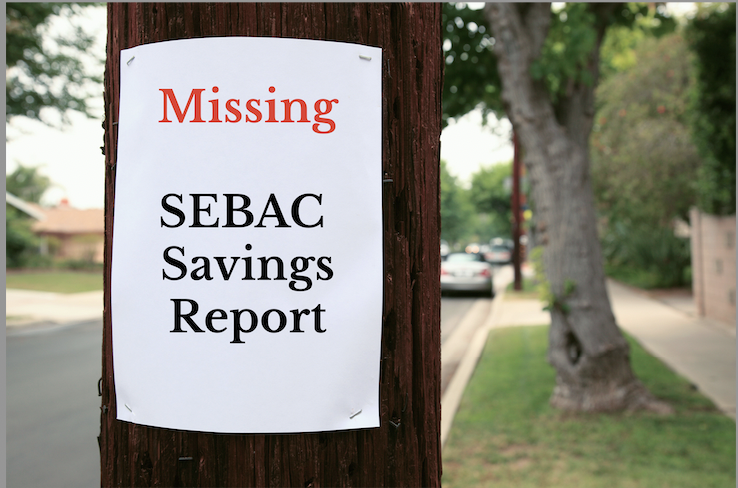 For the second consecutive year, the Office of the State Comptroller failed to meet the statutory deadline to report on taxpayer savings generated from the 2017 State Employee Bargaining Agent Coalition (SEBAC).

The 2017 deal, touted to save Connecticut taxpayers $24 billion over 20 years, states, “Not later than December 1, 2018, and each December first thereafter, until and including December 1, 2027, the Comptroller shall report the amount of labor-management savings realized for the previous fiscal year pursuant to the operation of the agreements.”

This stipulation, among other terms, was in exchange for layoff protection raises; a 10-year extension of the 1997 SEBAC contract; increased pension contributions; higher medical copays and converting retirees into the Medicare Advantage program.

Yet to date, the state comptroller’s office has thus far only produced two reports, claiming $2.5 billion in total savings. The first encompasses savings for 2018 and 2019. The second for 2020 and 2021 was, coincidentally, released after Yankee Institute (YI) notified the office’s failure to produce a report on time. In emails between the organizations, the state believed it was only required to report biennially. It is not uncommon that state agencies are late or missing reports, This is often pointed out in state audit reports. The agencies generally acknowledge their tardiness, often pointing to a lack of adequate staffing as the reason for the oversight. However, the lack of a report comes with a rather sore history.

Prior to the required yearly reporting, the state struck secret deals with SEBAC, while promising cost savings to the taxpayers. But the details of these savings were never publicized. Most notable was a 2011 deal Gov. Dannel Malloy struck with SEBAC that professed to save the state $1.6 billion with an estimated $270 million in savings over two years from a “suggestion box” offered to union employees.

A spreadsheet with 344 suggestions was provided to Hearst Connecticut Media Group, which It comprised of mostly reductions in the use of consultants the state uses. Aside from those suggestions, details of any savings were kept secret from the public because the Malloy administration would only release them to labor leaders who then refused to share them with anyone.

The public was misled by the “suggestion box,”, which has since never been seen or heard about again. This exemplifies the importance of the SEBAC savings report. The public has a right to know if deals made behind closed doors with labor leaders — with promises of saving taxpayers money — truly come to fruition and aren’t victims of political theater.

At the time of writing, a YI email sent to the comptroller’s office inquiring about the report’s release date has gone unanswered.