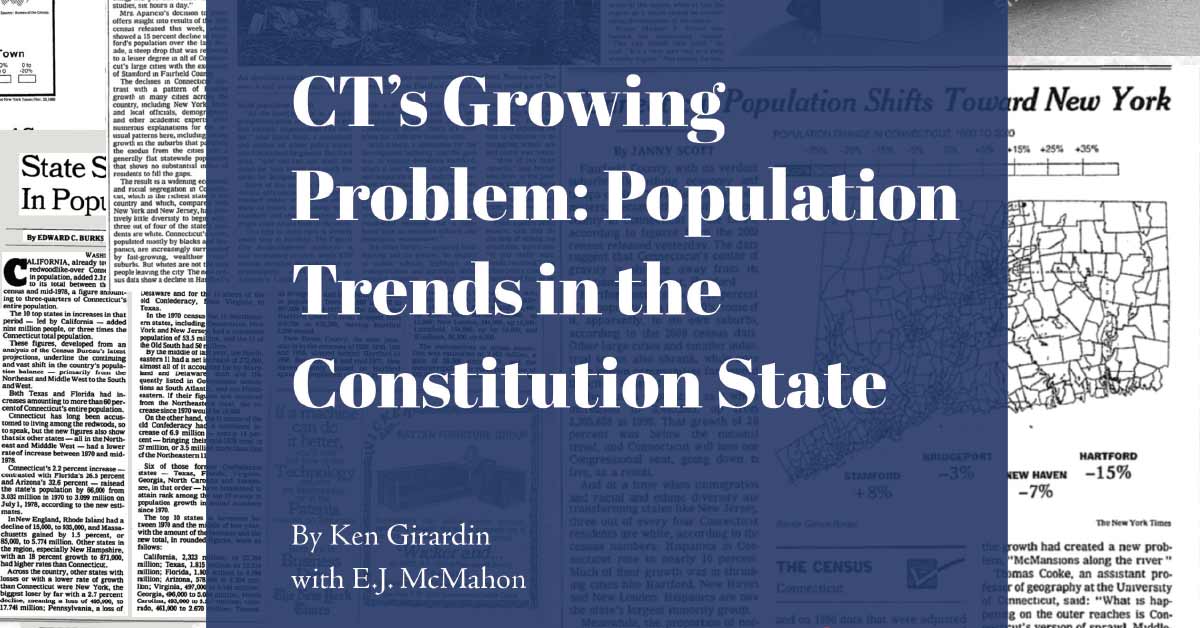 By Ken Girardin and E.J. McMahon

The 2020 U.S. Census carried a troubling message for Connecticut. In a decade when the nation’s population increased by 7.4 percent, the headcount in the Constitution State barely grew at all.

Five of Connecticut’s eight counties (Litchfield, Middlesex, New London, Tolland, and Windham) lost population, something virtually unheard of in the preceding century. This was a remarkable turn, considering those five had together been the state’s fastest-growing over the prior four decades.

What was behind Connecticut’s poor population performance?

This report examines the drivers behind population change in Connecticut–births, deaths, and migration– with a focus on the component where state policy can play the largest role: migration within the United States.

Connecticut’s population growth from “natural increase,” the extent to which births outnumber deaths, has col- lapsed over the past three decades. In 1991, there were 21,822 more births than deaths. By 2019, that had fallen to 3,127. Even before the novel coronavirus pandemic, deaths outpaced births in half of Connecticut counties.

Between 1991 and 2020, 548,932 more people left Connecticut for other states than moved here, according to Census Bureau estimates. But Internal Revenue Service migration data, which measure moves between states, challenge the conventional wisdom that Connecticut’s weak population growth stems from people leaving.

In fact, IRS data show people have not moved out of Connecticut at an especially high rate, and that no particular age group has been overrepresented among outmigrants, compared to nationwide interstate migration trends.

Instead, Connecticut’s problem stems almost entirely from a failure to attract enough residents, either from other states or abroad, to consistently replace the ones who leave. This imbalance exists not only between Connecticut and retirement destinations such as Florida and South Carolina, but also with nearly every other state for which a significant number of moves in either direction was identified.

In fact, that constant stream of migrants from New York City and its suburbs has for years partially offset a much larger imbalance in the flow of moves between Connecticut and other states. But only New York and New Jersey sent more residents to Connecticut than they drew.

While Connecticut saw a rare instance of positive domestic migration (more arrivals than departures) during the pandemic, it remains to be seen whether Connecticut has become a more popular destination or simply benefited from an acceleration of planned moves and one-time pandemic-driven relocations.

Immigration from other countries has helped offset the state’s failure to attract residents and its declining natural increase. The roughly 340,000 net new residents added from abroad between 1991 and 2020 were responsible for all the state’s population growth (about 319,000 people) since 1990.

Policymakers should closely examine the factors behind Connecticut’s population struggle and address the factors putting Connecticut at such a competitive disadvantage for its most crucial resource. After years of leaning on gimmicks designed to “retain” residents, they need to take account of both sides of the migration ledger. Given its many strengths—its scenic beauty, well-educated and productive workforce, continuing leadership in some key industry sectors, and strategic location, to name a few—why doesn’t Connecticut attract more new residents to replace those it loses? Policymakers should focus on answering that question and addressing what the answers uncover.