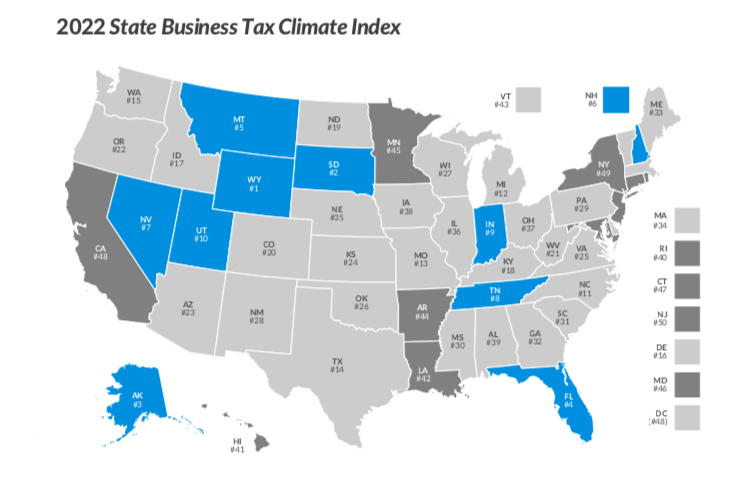 A couple weeks ago, while facing questions over his wife’s investments, Gov. Ned Lamont said Anne Lamont was in Nashville, Tennessee setting up businesses there because it was easier than setting up a business here in Connecticut.

Although the governor likely meant Nashville was easier because of the scrutiny he is receiving for state deals made with companies like Sema4 and Digital Currency Group — companies in which Anne Lamont’s firm has current or prior investments — his remark was not without a bit of truth, according to a new report from the Tax Foundation.

Connecticut was ranked 47th in the country for its business tax climate in the Tax Foundation’s latest study. Tennessee, on the other hand, came in 8th.

Connecticut scored relatively well for its corporate tax rate, sales tax rate and unemployment insurance tax, but was dragged down significantly by its individual income tax rate and its property tax. Connecticut was also highlighted as the only state in the country with a gift tax.

The report found Connecticut’s per capita property tax collections were the third highest in the country behind New Jersey and New Hampshire.

Other drags to the state’s score included Connecticut’s alternative minimum tax, which the report says is, “an inefficient way to prevent tax deductions and credits from totally eliminating tax liability,” and adds “needless tax complexity.”

They also faulted Connecticut for its capital stock tax rate, but noted the tax is set to be phased out over the next five years.

While states like Wyoming and South Dakota were at the top of the list, study co-author Jared Walczak notes that taxes alone do not determine a state’s attractiveness to business.

“A well-structured tax code won’t make the Wyoming Basin a metropolis, nor will a poor tax code make Manhattan a ghost town,” Walczak wrote. “But tax structure does play a role in a state’s economic successes or failures, and often a substantial one.”

“In other words, the Wyoming model may not be possible in some states – but the Utah, Indiana and North Carolina models are,” Walzcak wrote.

Connecticut’s ranking for its business tax climate has remained unchanged since 2014, according to the Tax Foundation. Connecticut scored better than New York and New Jersey, but worse than Rhode Island and Massachusetts.

“The Index measures tax structure, not all the other things business care about, like an educated workforce, quality of life, proximity to relevant markets or even the weather – some of these things involve trade-offs,” Walczak wrote. “But taxes are something within the control of policy makers and even within a given revenue target, there are better and worse ways to raise that revenue.”