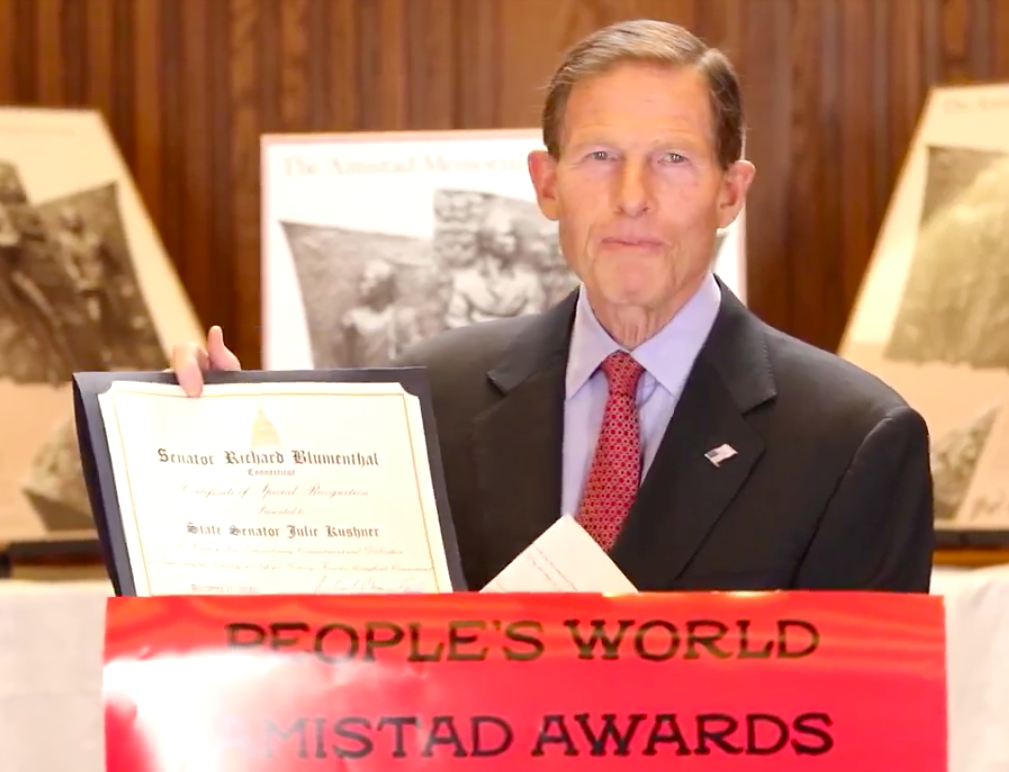 The Connecticut People’s World Committee presented its annual Amistad Awards on Saturday to mark the 102nd anniversary of the founding of the Communist Party USA, with awards being presented to Sen. Julie Kushner, D-Danbury, Pastor Rodney Wade of Waterbury and SEIU activist Azucena Santiago.

Sen. Richard Blumenthal, D-CT, joined the program as a surprise guest to offer his congratulations and present the award winners with certificates of special recognition from the United States Senate. “I am really excited and honored to be with you today and share in this remarkable occasion,” Blumenthal said.

Blumenthal said one doesn’t have to agree with everything the party or the unions stand for and said he was there to acknowledge “the great tradition of activism and standing up for individual workers that is represented by the three honorees.”

Blumenthal also used his time to pitch support for the Build Back Better plan, voting legislation, a national $15 minimum wage, ending the filibuster and re-electing Democrats to Congress.

“There’s a lot to be working for in economic justice, in racial equity, in establishing a $15 minimum wage,” Blumenthal said, “and holding corporations accountable for the basic treatment of the American people. We need to look at our entire tax system, beginning with Build Back Better.”

Kushner, a former labor organizer for the United Auto Workers and co-chair of the General Assembly’s Labor and Public Employees Committee, received the award for her work on passing Connecticut’s $15 minimum wage, the paid family and medical leave program and her previous union organizing efforts to bring more diversity to the UAW.

Kushner said she became involved in union organizing at a young age, working with employees at the casinos, as well as organizing graduate students at universities giving her friendships and “deep bonds that will never go away.”

The other awardees included Pastor Rodney Wade of Long Hill Bible Church in Waterbury for his support in the Recovery for All campaign, which included union labor and community activists pushing for higher wages, increasing taxes on the wealthy and more social spending in response to the COVID-19 pandemic, and Azucena Santiago of SEIU 32BJ, who pushed unionization efforts at fast food restaurants in Connecticut Service Plazas.

“We invite you to join the Communist Party in this epic time as we make good trouble to uproot systemic racism, retool the war economy, tax the rich, address climate change, secure voting rights and create a new socialist system that puts people, peace and planet before profits,” event emcee Ben McManus said.

The Connecticut Communist Party is headquartered in New Haven and is run by long-time chairwoman Joelle Fishman, who also serves as chair of the CPUSA Political Action Commission, according to People’s World.

*Meghan Portfolio contributed to this article*