Top 7 things Yankee Institute remembers about 1991: Countdown to the 30-year anniversary of the state income tax 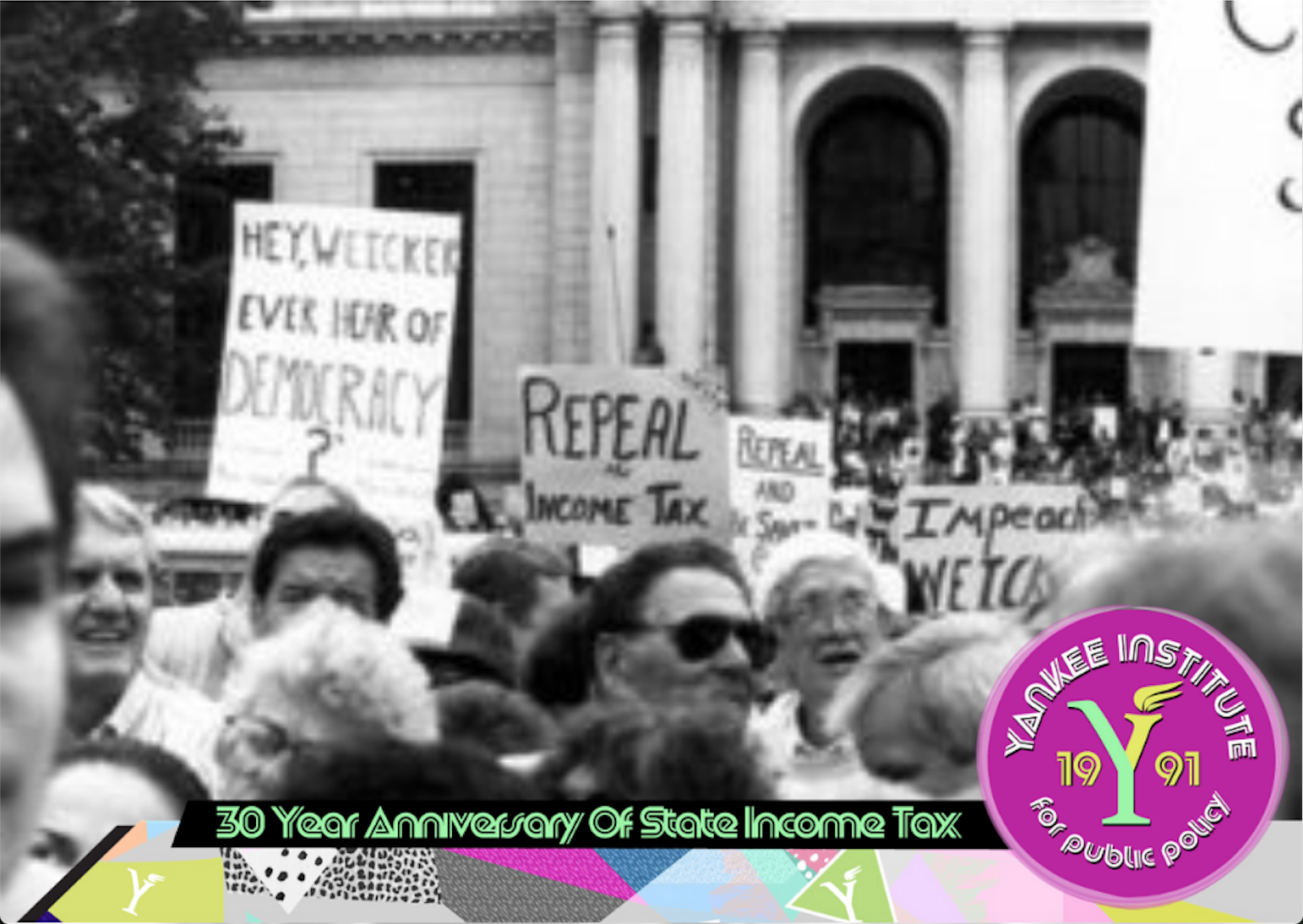 It was the year the USSR dissolved – George H.W. Bush was President, and our Governor was Lowell P. Weicker Jr. (I). A lot has changed since 1991 – yet Connecticut is still stuck with the state income tax, which was introduced that year and often discussed as a temporary revenue measure to shore up the budget.

Follow along as we look back at some of the top highs and lows of 1991.

Our take home pay was different too. Thirty years later, the cost of living in Connecticut has certainly changed, and our income tax – originally adopted by the General Assembly at 4.5% in August 1991 – has grown with it, now ranging between 3-6.99% (per the Hartford Courant).

On August 6th, 1991, Tim Burners-Lee published the first ever webpage and the world was introduced to the World Wide Web! The webpage acted as an instructional guide for users since it was the first of its kind. Berners-Lee refused to patent his invention, instead wanting it to be free and open so it could continue to evolve. You can see the reconstruction of the original page here.

Just like the internet has only grown more prominent in our daily lives, so too has the financial burden of the state income tax in the people of Connecticut’s lives.

Were you in search of a child’s Christmas present in 1991? You probably tried to get ahold of the 16-bit Super Nintendo – the top toy of 1991, which would go on to sell 49 million consoles worldwide. While technology has changed and Super Nintendo fans have grown into adults, the financial burden of the state income tax on the people of our state has remained.

1991 was a big year for landmark movies: Terminator 2: Judgement Day, Robin Hood: Prince of Thieves, Beauty and the Beast, Hook, and The Silence of the Lambs were the highest grossing films of the year. These movies have a special place in many of our hearts, just as the Connecticut income tax still has its permanent place in our state’s economy.

Mariah Carey was the songbird of 1991, capturing the best-selling album of the year with her 1990 debut album Mariah Carey. Following her second album drop in 1991, she made history as the only artist at the time to have her first 5 hit singles rise to the top of the Billboard Hot 100. Mariah Carey still blesses the airwaves, especially around Christmas time every year, but few if any of Connecticut’s legislators who voted for the state income tax 30 years ago are still in office – even though the residents of Connecticut and our future generations are still burdened with the result of their choice.

Julia Roberts not only emerged as a fashion icon and movie star, but was featured in three movies released that year: “Sleeping with the Enemy,” “Hook,” and “Dying Young.” Roberts is still an iconic beauty today, just as overtaxing citizens is iconic to Connecticut. As proposals for new and increased taxes are circulated every session – with a regional gasoline tax and state-wide property taxes just being the most recent – we need to remember these financial burdens won’t be temporary, just as the income tax introduced 30 years ago has become a launch pad for higher tax rates in our economy.

We can’t look back to 1991, without remembering the people’s Anti-Income Tax Rally at the state capitol. It reportedly peaked at between 40 to 70 thousand people in attendance, making it one of the largest protests in state history. We remember the Connecticut citizens who used their voices to push back.

The 30-year anniversary marks an important point in our history, and it must serve as a lesson as Connecticut moves forward. As we keep our eyes on the future, with recent proposals around introducing a new regional gasoline tax, state-wide property taxes, and more, it’s important to keep past lessons in mind and remember that the choices we make today will financially impact the people of Connecticut for generations to come.